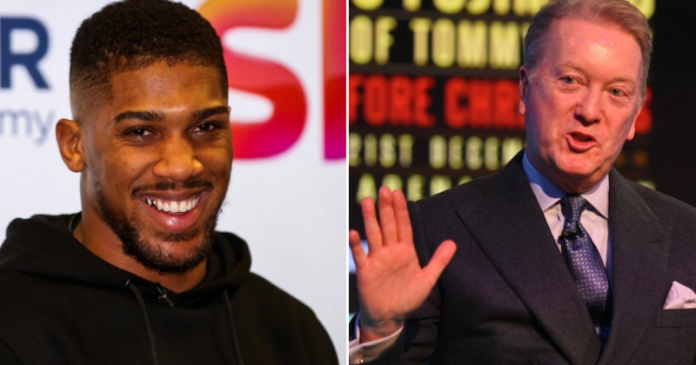 Tyson Fury’s promoter Frank Warren has said if fans want to see a unification fight with Anthony Joshua “we will make it happen”.

The British heavyweights now hold all of the division’s belts between them, after Fury, 31, beat Deontay Wilder, 34, to claim the WBC title.

Joshua’s promoter Eddie Hearn said “let’s give the fans what they want”.

“Of course we want to see the fight,” Warren told BBC Sport. “We’ve been trying to make it for two years.”

“This is about the boxers and more importantly the fans. If they want to see the fight we will make it happen.

“In the meantime, Eddie Hearn is acting like the guy standing outside your house with his nose pressed up against the window and keeps spouting off about Tyson.”

The immediate prospect of the fight hinges on the fact Wilder has the option of a rematch with Fury and has 30 days to invoke a clause in his contract.

Hearn says if that happens then Joshua, 30, will face Kubrat Pulev in a mandatory IBF bout, with the promoter in talks to hold the fight at Tottenham Hotspur Stadium on 20 June.

Hearn told BBC Radio 5 Live yesterday: “The fight we want more than anything is the undisputed fight. The person that holds the key to that is Tyson Fury. If we can get that next we are all in on that fight.