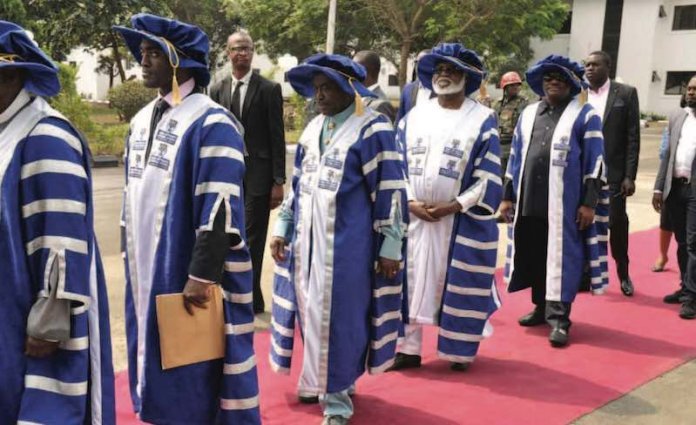 The first Founders’ Day and third matriculation ceremonies held by PAMO University of Medical Sciences penultimate week were an opportunity to showcase the impact the institution has made in less than three years of its existence, Davidson Iriekpen writes

Others were the former Head of State, General Abdulsalami Abubakar (rtd), who is Chancellor and Chairman, Board of Trustees of the institution; Minister of Labour and Employment, Dr. Chris Ngige, and the host, Rivers State Governor, Nyesom Wike, among others.

All the dignitaries took turn to commend the founder of the university, Dr. Peter Odili for the vision to establish the institution, which today has become an important ivory tower that the country has been waiting for to bridge the gap in medical manpower for the country.
For instance, Governor Mohammed, who spoke on behalf of others, hailed Odili for his foresight in initiating the university. He said the institution would go a along way in providing the required manpower in the country’s health sector.

According to the governor, “I am highly delighted to be here. The establishment of a university like this is a welcome development and can assist in the provision of qualitative healthcare services to Nigerians. I commend Dr. Peter Odili for his humanitarian services in addition to the establishment of the university.”
On his part, Wike said because PAMO University is the first private university in the state, it deserves the support of every son and daughter of the state. He lauded the institution for creating opportunities for Rivers children and other Nigerians to have access to medical education. The governor announced that the state government would support the construction of two hostels in the institution.

The Chancellor of PAMO University of Medical Sciences, General Abdulsalami Abubakar (rtd) said the university as the first dedicated to medical education, is growing rapidly. He thanked Wike for his contributions to the growth of the institution through his unwavering support. He also lauded the National Universities Commission (NUC) for the positive role it has played in developing universities in the country.

The Minister of Labour and Employment, Dr. Chris Ngige endowed a prize for anatomy, biochemistry and physiology. He said the best student in the mentioned areas would be rewarded handsomely. He urged students of the university to emulate the founder, who has been hard working and committed to serving humanity.
On his part, the Pro-Chancellor of the institution, Dr. Odili thanked Wike for the pomp and ceremony he adds to all events of the institution. He disclosed that all the students sponsored by the Rivers State Government at the university are up to date in their payment of fees. He stated that establishing a private university is a service to the society, because profits start after more than 10 years.

PUMS was conceived and given birth to in order to bridge the gap of inadequate manpower in the medical and healthcare sector. It is well-equipped with modern facilities found in most developed countries. For many who know the institution, one of its greatest strengths is that its founder is not only a renowned medical doctor, but has, since the 1980s, established the PAMO Specialist Hospital, which means that from takeoff, the institution has an already-made teaching hospital to aid students right from 100 level in order to have a full medical knowledge and experience. This is unlike other universities whose students start hospital experience from 400 level.
The university has courses such as anatomy, biochemistry, human nutrition and dietetics, pharmacology, physiology, and nursing, medical laboratory science in the Faculty of Basic Medical Sciences, as well as Bachelor of Medicine and Surgery (MBBS) in the Faculty of Clinical Sciences.

Sited in a serene atmosphere in a large expanse of land off Aba Road in Port Harcourt, PUMS boasts of tasteful facilities with full residency for students. Because of the crises that have characterised public and most private universities in the country, PUMS in order to ensure that it achieves its core mandate of producing quality medical doctors and healthcare personnel in the country, has set the rules for incoming students. These rules, the management has promised, won’t be compromised.
To maintain high academic record, the university has kept its admission strictly on merit and has placed all students on residential accommodation on campus. For students to concentrate on their studies and not unnecessarily show off their background, they are not allowed to use cars on campus.

The school management said there is zero tolerance for cultism and related vices for both staff and students, adding that students are not allowed to expose their bodies indecently; as there are dress codes for lectures and official functions for both students and staff of the institution.
For those who were there to witness the event, PUMS could not have come at a better time than now when medical education in the country is facing the challenges of access, quality and relevance. This is compounded by the inadequate number of medical and healthcare professionals practicing in the country.

Presently, medical schools in the country cannot absorb the number of qualified candidates who are interested in pursuing courses in the medical field. Universities in Nigeria, whether private or public offering medicine are distracted by other courses since they are not specialist institutions. This is where PUMS stands out.

According to statistics, Nigeria has only 35 per cent of her requirement for medical practitioners. This gloomy picture is worsened by the fact that less than five per cent of qualified applicants can be admitted into degree programmes in medical and health sciences in all universities every year in the country on account of limited spaces.
In a sector and industry which is prone to stories of what has gone wrong and what is not working, PUMS is gradually changing the narrative.

At the matriculation ceremony, the Vice- Chancellor of the university, Prof. Michael Diejomaoh, used the occasion to showcase the institution’s uniqueness. He reminded the students to take their studies seriously, adding that it was because the school found them worthy in character that they were given admission. He advised the students to be worthy ambassadors of the university and Nigeria.

Diejomaoh, a world-class obstetrician and gynaecologist, tasked the students on the need not to flout the rules and regulations of the institution, telling them that at the end of their studies, they won’t regret attending the university as they would stand out in their chosen professions.
The Chancellor, General Abubakar, described the institution as a world class university dedicated to building healthcare workers, including medical doctors and nurses in the country. He added that going by the impact and steady progress the university has made in just three years, it could not have come at a better time than now to fill the gap left by most institutions in the country.

The former Head of State reiterated that PUMS would strive to address challenges associated with medical practice and education in order to achieve global excellence in terms of teaching, research and community services. He added that the university will produce graduates in different fields of medicine who are not only competent in their professions, but also worthy in character and learning.

He advised the students to be good ambassadors of the school, adding that he has no doubt that based on the training they would receive, they would all stand out in the society.
Odili also stated that in less than three years of establishing the institution, Nigerians are now choosing the school ahead of the quota set by the university. He added that the school has, in a short time, become a choice of study for many Nigerians filling their Joint Admissions and Matriculation Board (JAMB) forms. The renowned medical doctor noted that the level of discipline and quality of learning in PUMS is unrivaled, as its projection remains to become one of the best universities in the country.

He said: “Those who are filling PAMO University in their JAMB forms have surpassed the space we have for students. This shows that many students want to come to the school for their academic pursuit. Our plan is to ensure that graduates from this institution are exceptional in the course of offering healthcare services to Nigerians. And for that to happen, they must be certified worthy in character and learning, which is what we are pursuing.
“Though the university has put in place stringent conditions of learning, they would help in guiding you to success. Take those pains now and bear, at the end of the day, you will forever be grateful to the university you attended Nigerians.

“In the hospital setting, the most important person is the patient. You must therefore treat your patients like your bosses without which you have no work. For that to happen, your character must be impeccable, and that is what PUMS is about,” he added.