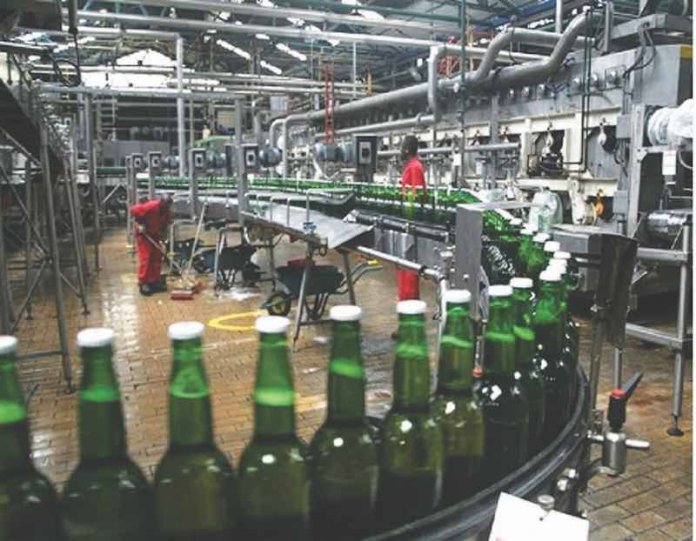 Nigerian Breweries (NB) Plc is arguably the country’s largest brewing company with a market capitalization approximating N472 billion about ($1.31 billion) as of December 31, 2019. The figure makes the company, which is listed on the floor of The Nigerian Stock Exchange (NSE) in 1973, one of the highly capitalized companies on the bourse by market capitalization. But the last time the multi-billion naira company recorded a growth in its business was in 2017. Bamidele Famoofo reports that the company has recorded a declining performance beginning from 2017, with key performance ratios suggesting that the management team must quickly go back to the drawing board to come up with strategies that will put a stop to its declining fortunes

Nigerian Breweries Plc was incorporated some 73 years ago in Nigeria. It recorded a landmark when the first bottle of Star lager beer, its leading brand, rolled out of its Lagos brewery bottling lines three years after its incorporation in 1946.

Over the years, the company whose head office is located in Lagos has expanded its operating base to about nine brewing locations across the country by means of inorganic growth.

In 1993, the company acquired its fifth brewery in Enugu and in 2003, a sixth brewery (Ama Brewery), sited at Amaeke Ngwo in Enugu State was commissioned. Operations in the old Enugu Brewery were discontinued in 2004 following the completion of Ama Brewery. In 2008, an ultra-modern malting plant was acquired in Aba.

So, at the end of 2014, an enlarged Nigerian Breweries Plc emerged from a merger with Consolidated Breweries Plc. Three breweries at Imagbon, near Ijebu Ode, Awo-Omamma, near Owerri and Makurdi were added to the existing eight breweries as a result of the merger. The Onitsha and Makurdi locations were subsequently developed into distribution centres.

Following the acquisition of Sona Systems and Life Breweries in 2011, Goldberg lager, Malta Gold malt drink, and Life Continental lager, were added to the brand portfolio. The company increased its portfolio of brands in 2014 with the addition of two-line extensions of the Star brand – Star Lite and Star Radler. Also in 2014, as a result of the merger with Consolidated Breweries Plc, “33” Export lager beer, Williams dark ale, Turbo King dark ale, More lager beer and a malt drink, Hi Malt, became part of the company’s product offering. The Ace brand in the Ready-to-Drink (RtD) category was launched in 2015 while Tiger lager beer was added to the portfolio of brands in 2018.

The company has an export business, which dates back to 1986. The current export destinations are the United Kingdom, the Netherlands, the United States of America, Canada, some parts of Africa and parts of the Middle East and Asia.

Over the years, NB Plc has establishment ancillary businesses in Nigeria. These include manufacturers of bottles, cans, crown corks, labels, cartons, and plastic crates as well as service providers including those in the hospitality sector, distribution, transport, event management, advertising, and marketing communication.

Administrative expenses have consistently been reduced since 2017 to allow for a better dividend for shareholders. The company moved from a cut of 4.4 percent in admin expenses from N21.74 billion in 2017 to N20.8 billion in 2018, to a higher cut of about 7 percent to about N19.5billion in 2019. However, operating expenses have been on the rise in the review period from 4.7 percent between 2017 and 2018 to 11 percent at the end of 2019.

Profit margin has witnessed a drop since 2017 like other ratios. (Profit margin is the percentage of profit that a company retains after deducting costs from sales revenue.) NB’s profit margin has performed below par since 2017, as the figures year-on-year has been below 10 percent. Though a good margin will vary considerably by industry, as a general rule of thumb, a 10 percent net profit margin is considered average. The figures for NB plc in 2017 were 9.6 percent, and it has reduced to 5 percent in 2019.

The current ratio is a liquidity ratio that measures a company’s ability to pay short-term obligations or those due within one year. Though this ratio varies from industry to industry, between 1.5 and 3 percent are acceptable for healthy businesses. In the case of NB Plc, 0.58 percent is the best in the last four financial years. It means the company lacks the wherewithal to pay its creditors as and when due at the current rate.

The company is not also able to meet its short-term financial liabilities, going by the figures of its quick ratio in the last four years, as it falls far below the generally acceptable figure of 1, as the best it had recorded in the past four years was 0.36.