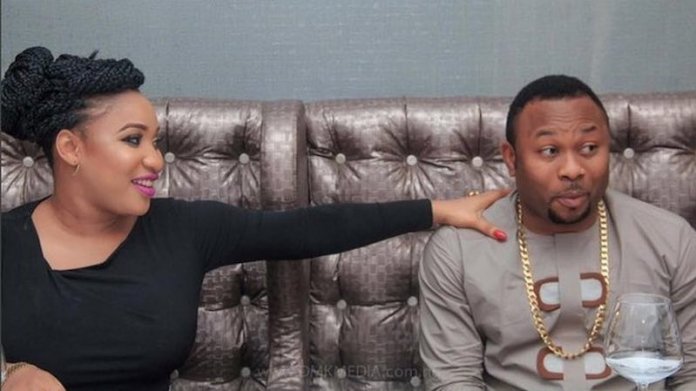 Olakunle Oladunni Churchill is the CEO, Big Churchill Haven Limited.
He came into the public consciousness after his romantic affairs with star actress, Tonto Dikeh, was reported in the media.
Without a care in the world, both took their love story to the next level; and their wedding gained media attention, particularly because he is a nephew to ex-President Olusegun Obasanjo.

Before our very eyes, cracks developed in their marriage and both went their separate ways.
It was so bad that his estranged wife accused him of infidelity, just as he also threw barbs at his wife.
But if you think the former sweethearts have moved on, you are wrong.
Instead, the ‘war’ is getting messier as the businessman has dragged his former sweetheart to court over an explosive interview she did some time in 2019.

Olakunle Churchill, who referenced the three-part YouTube series titled, ‘The Evidence’ which was shared in 2019, said his ex-wife accused him of cyber fraud, popularly known as Yahoo-Yahoo, and also alleged that she caught him clad in a red cloth, surrounded by red candles with a laptop placed on his lap.

He is also seeking legal redress against the mother of his only child over the claim of his father being a gardener and that he is not related to Obasanjo.
In the lawsuit notice, which has him as the first claimant and Big Church Foundation as the second claimant, Churchill stated that the allegations are baseless and sponsored to tarnish and damage his image and political ambition.

In the court summons, the actress was asked to appear for trial 14 days from December 10, 2019.

How the matter will be resolved remains in the womb of time, considering the fact that the matter came up last Thursday.