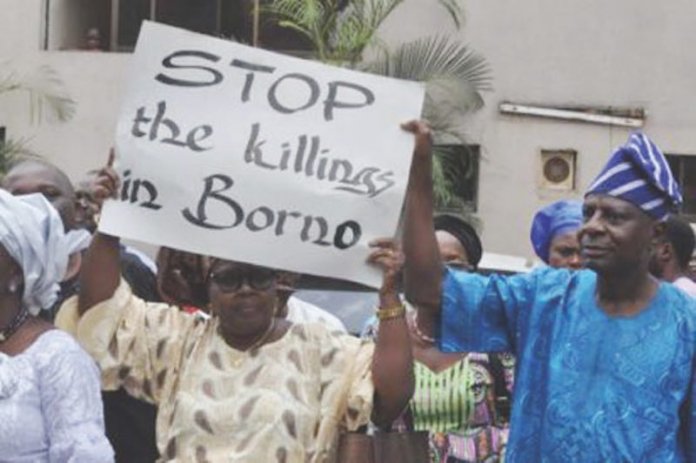 As bandits and kidnappers hold the nation hostage, there is spat at seat of power, writes Samuel Ajayi

The recent spat between the National Security Adviser, NSA, General Mohammed Babagana Monguno, and the Chief of Staff to the President, Alhaji Abba Kyari, is an indication of what is wrong with the nation’s security architecture and why insecurity remains seemingly intractable.

In a leaked memo to the Chief of Staff to the President, the NSA had accused the former of usurping the powers of the Commander-in-Chief by giving orders to service chiefs. He also accused him of calling security meetings, which was clearly not under his purview.

In the leaked memo, the NSA stated thus: “(The) Chief of Staff to the President is not a presiding head of security, neither is he sworn to an oath of defending the country.

“As such, unprofessional practices such as presiding over meetings with service chiefs and heads of security organisations as well as ambassadors and high commissioners to the exclusion of the NSA and/or supervising ministers are a violation of the constitution and directly undermine the authority of the President.”

He was not done.
“Such acts and continued meddlesomeness by chief of staff have not only ruptured our security and defence efforts, but have slowed down any meaningful gain that Mr. President has sought to achieve.”

The above is an indication that things are not well between those, who are supposed to be in charge of the nation’s security management. For the NSA, one of the most powerful positions, even in advanced democracies in the world, to write such a memo to the Chief of Staff to the President says it all. It is an indication that perhaps, citizens are on the own as far security of lives and property is concerned.

During the last Federal Executive Council meeting, held earlier in the week, the NSA was a conspicuous absentee. Sources said he was out of the country but those who should know claimed that his absence at the meeting, a rare occurrence, might have something to do with his spat with the Chief of Staff to the President. This could not be verified though.

PREMIUM TIMES, an online news portal, had reported during the week also that the Chief of Army Staff, General Buratai, had withdrawn top army officials attached to the office of the NSA. This, according to the online newspaper, was done via a memo between February 4 and 11 this year.

These officers included three majors-general, a brigadier general, five colonels and a lieutenant. The newspaper also reported that the NSA had overruled the withdrawal since, by virtue of his office. He was supposed to be in charge of all security matters in the country.

And as the spat goes on, the nation continues to be at the mercy of insurgents, kidnappers and bandits. During the week, four officials of the Nigerian Security and Civil Defence Corps, NSCDC, were kidnapped between Kogi and Benue. They were on their way to Makurdi, the Benue State capital, to sit for their promotion examinations.
“Our fears are that these officers might be killed,” an official of the Corps with the Lagos State Command, who did not want his name in print told THISDAY on Friday.

“When they were being abducted, there was a gunshot injury sustained by some of the kidnappers. Our fear is that the kidnappers might kill the officers out of anger. We are really worried. We can only wait and see what our superiors come up with as per efforts to rescue these guys.”
Katsina, the home state of the President, has been in the news for all the bad reasons in the last couple of weeks. Just a week ago, armed gangs raided villages Tsauwa and Dankar, in the state and killed 30 people and also set houses ablaze. The attackers came on motorbikes and were armed with sophisticated weapons.

“The bandits killed 21 people in Tsauwa and another nine in nearby Dankar. Most of those killed were old people and children, who could not escape,” Gambo Isah, the spokesman of the Katsina Police Command, told newsmen.
The thinking by majority of Nigerians is that those who are in charge of the nation’s security management have outlived their usefulness. This was apart from the fact that the service chiefs especially, the Chief of Army Staff had been due for retirement for over three years now. And as a result, there are rumblings since those who were supposed to move the promotion ladder had failed to do so.
Calls for the removal of the service chiefs have been strident lately. Even top government functionaries and heads of other arms have added their voices, albeit discreetly.

And as if to tell those who were asking for the career heads of the service chiefs that their wishes would not come to pass, the Secretary to the Government of the Federation, Boss Mustapha, recently said removing the service chiefs might cause instability in the country.
“We are in very difficult situation and when we begin to create cracks and divisions, who will be the beneficiaries? The adversaries are the ones that are going to exploit those deficiencies and further the cause of destabilising the nation,” Mustapha said.

For now, the nation is stuck between the devil and the deep blue sea. While insurgents and bandits and kidnappers are having a field day, the spat between the NSA and the President’s Chief of Staff can only embolden the criminals. The nation is evidently at crossroads. But, for how long will Nigerians continue to die needlessly?

Pix: A Church protest in Abuja over the unceasing killings in Borno and other parts of the country.jpg