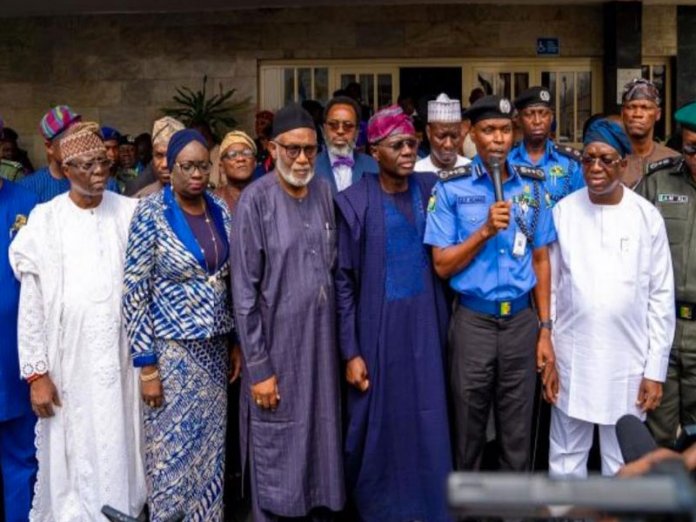 Ejiofor Alike in Lagos and Victor Ogunje in Ado Ekiti

The governors of the South-west, the Inspector General of Police (IG), Mr. Mohammed Adamu and state police commissioners in the region, yesterday met behind closed doors in Lagos to forge a consensus on the regional security outfit, Amotekun, being promoted by the six states in the geopolitical zone.

The meeting, which held at the Lagos House, Ikeja, followed the plans by the governors to domesticate the operations of the South-west security initiative, code-named ‘Operation Amotekun’, in their various states.

At the end of the meeting, the police rallied behind the governors to ensure the take-off of Amotekun.
Also yesterday, a bill seeking the establishment of the Ekiti State Security Network Agency and Amotekun Corps, passed through first and second readings at the state House of Assembly in Ado Ekiti.

The News Agency of Nigeria (NAN) reported that the governors’ meeting with the police top chiefs, which was hosted by Lagos State Governor, Mr. Babajide Sanwo-Olu, was attended by Chairman of the South-West Governors’ Forum, Mr. Rotimi Akeredolu, heads of other security outfits in the six South-west states, attorneys-general and commissioners for justice, traditional rulers and community development committee representatives.

The governors of Oyo, Ogun, Osun and Ekiti states were represented at the closed-door meeting by their deputies – Rauf Olaniyan, Noimot Oyedele, Benedict Alabi and Bisi Egbeyemi – respectively.

Akeredolu told reporters after the meeting that it was time to deploy community policing because of the peculiarity of every state as it was done in advanced countries.

According to him, there is need to embrace community policing because of numerous security challenges, which have overstretched the conventional police.

”This is something of great importance to all of us; something we cannot pretend about. We must be honest with ourselves; all of us agree that we are facing security challenges. The National Assembly, the president, nobody is happy with the way things are going.
”We must have a rethink about central police; there is too much on the IG’s table,” Akeredolu said.

The IG, on his part, said community policing had to come from the public and not just from the police.
Adamu commended the Lagos State Government for the structure put in place in policing the residents and urged other states in the region to emulate Lagos.

”We assure the entire Nigerian police formation that the Lagos State Government will continue to give cooperation that is needed to ensure that the entire police force discharge their responsibility and their duties very well,” Sanwo-Olu stated.
However, a statement later issued by the Chief Press Secretary to Sanwo-Olu, Mr. Gboyega Akosile, said the governors and the IG ratified the decision to set up Amotekun.

The statement added that the IG substantiated Akeredolu’s claim, saying the participants at the meeting had fine-tuned Operation Amotekun and adopted it to be state-led initiative and not regional.

The statement quoted the IG as saying that: “This is the second meeting we have held with the governors of the South-west region concerning the creation of Operation Amotekun. The just-concluded meeting was to discuss and fine-tune Amotekun. Our conclusion is what the chairman of South-west Governors’ Forum has explained.

“Amotekun is not a regional security outfit. Every state has one form of security arrangement, whether it is vigilante or neighbourhood watch that are working security agencies in the states to fight crime. Amotekun is not different from these initiatives. We have agreed that community policing strategy be infused into the Amotekun structure, so that policing will be the initiative of the community members.”

Adamu said the police would be part of the recruitment, training and deployment of personnel to be assigned for Amotekun operations, adding that the initiative would complement the community policing model.
The IG stated that policing must start with the public and urged people to unite and form an alliance against criminals in their communities.

He said the police would support the residents’ efforts to keep their communities safe, but added any decision to be taken must come from the public.

The IG praised the Lagos Government for adopting a community-led policing arrangement, saying Lagos remained an example where “a good structure” of community policing had been effective.

Meanwhile, the bill seeking for the establishment of the Ekiti State Security Network Agency and Amotekun Corps, has passed through first and second readings at the state House of Assembly

The bill, has also been committed to the House Committee on Security, chaired by Hon. Lateef Akanle, representing Ekiti East Constituency II, for scrutiny.

The State Executive Council had on Wednesday adopted the draft bill of the proposed law as a document of the state after exhaustive deliberation at its weekly meeting, before transmitting it to the legislature for passage into law.

At the plenary of the House yesterday, where exhaustive debate was carried out, it was a unanimous agreement that every Nigeria has right to life in line with Section 33 of the 1999 Constitution as espoused by Section 4 (C ) of the Amotekun bill, which emphasised protection of lives and property as primary responsibility of the security outfit.
The Speaker, Hon. Funminiyi Afuye, said the House would not violate the rules and standing order in quest to accord the bill expeditious passage.

“It has passed through the first and second readings. Both moral and jurisprudence aspects of the bill had been extensively debated. We have committed it to the Committee of the House, which will be holding a public hearing today (Thursday) at 2p.m.
“We are still on course and in line with procedures of lawmaking. We have not breached any procedure and we won’t breach the procedure in passing the bill into law,” he said.

Indications that the bill would be passed into law today came to the fore on the floor , as the speaker directed the Majority Leader, Hon Gboyega Aribisogan, who had earlier moved the motion for adjournment to Tuesday to amend the motion for adjournment to today.
The speaker charged the committee to be painstaking in the passage, saying : “we all know that internal and external migrations had caused banditry, kidnappings, robbery and insurgency in some African nations, Nigeria inclusive, and solution to it by law is protection of lives and property.

“The insecurity in our territory had led to loss of lives, farmers are no longer safe. Even if you do commercial farming, some people will go there and destroy it and this has been reducing the resources of our people.

“Recently, someone was kidnapped and the family paid a ransom of N20 million. One can imagine the psychological and economic effects of this and that necessitated the Amotekun issue,” he said.

In his submission, the Deputy Speaker of the House, Hon Hakeen Jamiu, said the increasing act of terrorism by Boko Haram in Nigeria, herdsmen attacks and kidnappings, had overwhelmed the conventional security agencies and that it was time for states to look inwards.

“The high level of displacement and migration from war-torn regions, robbery, kidnappings, herdsmen-farmers clashes, insurgency and terrorism had made things difficult for our conventional security architecture,” he said.