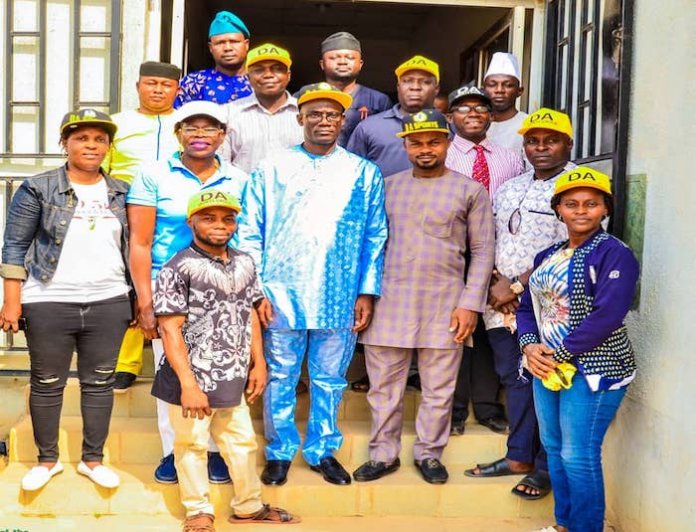 Sports enthusiasts in Ogun State have been assured of a better future when the immediate Past Commissioner for Youth and Sports now the Hon. Commissioner for Local Government and Chieftaincy Affairs, Hon Afolabi Afuape handed over his group that gave maximum support to the emergence of our amiable Governor, Prince Dapo Abiodun,MFR.

Hon. Afuape vowed his support for the ministry stressing that the group will be useful in providing progressive information both locally and internationally towards sports development in the state.

Hon. Afuape agreed that his tenure as the Hon Commissioner was unable to achieve much in area of sports development due to paucity of funds. He however pledged to give his unalloyed support to Dr. Kehinde Oluwadamilare having shown the capacity and potential for good performance within the short period of assumption to office.
The group also used the occasion to decorate the Hon. Commissioner for Youth & Sport as the new Patron of the body.

Mrs Falilat Ogunkoya, a sport ambassador in Nigeria, and also the President of the group, expressed sincere appreciation to the Founder of the group, Hon. Afolabi Afuape for his immense sportsmanship. She also congratulated Dr. Kehinde Oluwadare on his appointment as the Commissioner. She promised to be of assistance to sports development in the state whenever the need arises.