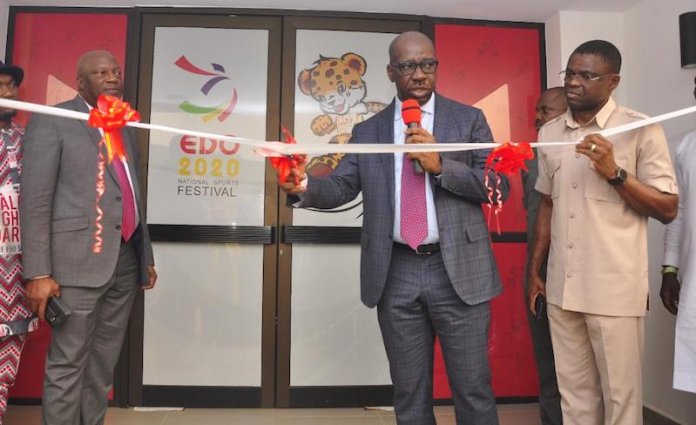 Ahead of the 20th edition of the National Sports Festival to be hosted by Edo State in March this year, the state’s Governor, Mr. Godwin Obaseki, yesterday, inaugurated the secretariat complex for the festival

The Secretariat is located within the Edo State Government House in Benin City and would serve as the coordinating venue for the competition, which holds in different venues across the state.

Addressing journalists after inaugurating the complex, Obaseki described the edifice as a world-class office with conducive environment for work.

He said the campaign for the National Sports Festival would commence in a week’s time, as President Muhammadu Buhari is scheduled to receive the torch of the game by the end of the month.

Obaseki said the physical infrastructure needed for the games are being completed, noting, “I was flying over the Samuel Ogbemudia stadium today, you can see that the base for the track has been laid; the football pitch is ready, and the lawn tennis section is completed. The swimming pools are being furnished, so the key infrastructure we need for the game are almost ready.

“Athletes are being readied for camping. All measures that will ensure the success of the games have been taken care of,” he said.

In his remarks, Edo State Deputy Governor, Rt. Hon. Phillip Shaibu, said the state is making sure it hosts the games to win, adding, “the Edo State Sports Festival holding from Feb. 10 would be used to select athletes across the 18 local government councils of the state to represent Edo during the NSF.”

“The state’s gold medalists are seeded for the finals of the state festival and we are using the festival to get new talents from across the state,” he added.

The deputy governor said the camping for the NSF would commence at the end of the state’s sports Festival.