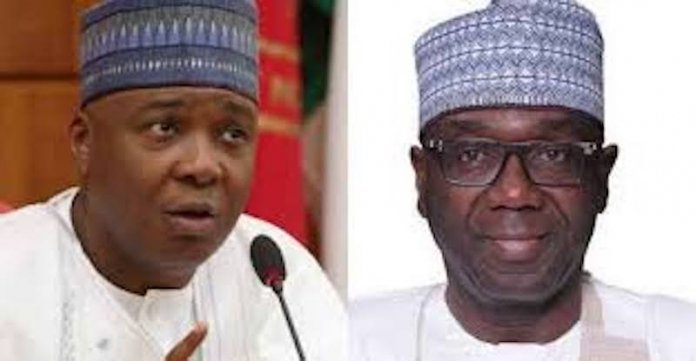 Ahmed Ibrahim
In late December, the Kwara State government reclaimed a piece of land bordering the civil service clinic in Ilorin, the state capital. The Government said the land originally belonged to it and was meant for construction of state secretariat but was unlawfully allocated to one Asa Investment Limited, a firm owned by the late strongman of Kwara politics Senator Olusola Saraki, in 2005 when his son, Bukola Saraki, was the Governor.

Bukola Saraki, until 2019 the all-in-all of Kwara politics, objected. He said the Governor had crossed the line of decency. He hauled so much invective on the Governor who Saraki insisted had declared a war. The Government, having reclaimed the land, moved to clear the sheds on it in readiness for its use. The Sarakites went on overdrive, with Bukola’s sister and a minister, Gbemisola, also aligning with her brother. Riding on their media influence, they sold the lie that the government actually demolished an old people’s home — one big lie that was meant to portray the government in bad light. There was nothing like old people’s home anywhere in Ilorin. That place had sheds and a small bungalow used to store political goods for followers of Saraki, male, female, old or young. Nobody ever lived there. Well, the lie was deliberately told to whip up sentiment.

Bragging to possess all the documents to lay claim to the land, Sarakites headed for the court. Government focused on its own narratives: this was a public property illegally given to a private firm without a dime paid to the government or any document validating the acquisition. Every other thing was baseless sentiment. Suddenly we heard of a 29-man committee set up to resolve the matter instead of the court. Findings have shown that the committee, peopled by very prominent elders from Ilorin, was at the behest of the Sarakites who in fact mobilised the media to its inaugural meeting.

That meeting didn’t achieve anything, as many of the elders understood the enormity of the issues and the moral burden placed on them. They diplomatically turned down the assignment. How would they resolve the issue without asking the Governor to release public property to a family? What precedent would they be setting for a state that is a victim of misrule and in-your-face arrogance, and is in a dire need of breaking free from its dark years? Besides, social listening revealed clearly that nine in every 10 Kwarans are opposed to the government releasing the land under whatever guise. Contrary to the grandstanding of the Sarakites, the Kwara public know the truth about the land.
Last Thursday, a story broke that the Sarakites have written to seek out of court settlement with the government on the issue. They said they were acting pursuant to the court’s advice that the parties should settle out of court. Maybe. What nobody has said is that, contrary to the public chest-beating by the Sarakites, the only document they have filed before the court is that notorious letter of allocation of June 2005. What happened to the Right of Occupancy or Certificate of Occupancy that Sarakites said they have on the land? If they have those documents, why didn’t they file same before the court after all the law today is that you must front-load the documents with which you plan to prosecute your case? No surprises.

It is clear from the above that the balance of power in this case heavily tilts in favour of the government. The government not only has the legal basis and moral stamina to reclaim the land, what it did was the best for the state at this time. It is a warning to everyone that power is transient and should not be abused. It was an abuse of power for Bukola to have allocated public land to his father at the height of their controversial reign. It is also clear that Bukola Saraki overreached himself with his letter of threat to the Governor, knowing fully well that he lacks the moral or legal basis to invoke the principle of reciprocity in this delicate matter.

My personal take, as a Kwaran, is that the so-called out of court settlement must never jeopardise the interest of the state. In view of the baseless lies they have told to the world, the government’s delegation must demand that Saraki withdraw his threat to the Governor and apologise for misleading the public about the existence of an aged people’s home on that land. Gbemisola must also be told to withdraw her horrible lies that old women were shot at by some imaginary mercenaries. That is because there is no shred of evidence to support that unGodly lie. If they do so, among whatever conditions the government may have, the family can then be allowed to apply for another land that they must pay for. That is provided they still need any land for their political gathering which that place served. We can’t continue to allow anybody to hold the public in contempt in pursuit of their selfish agenda.
––Ahmed writes from Ilorin.