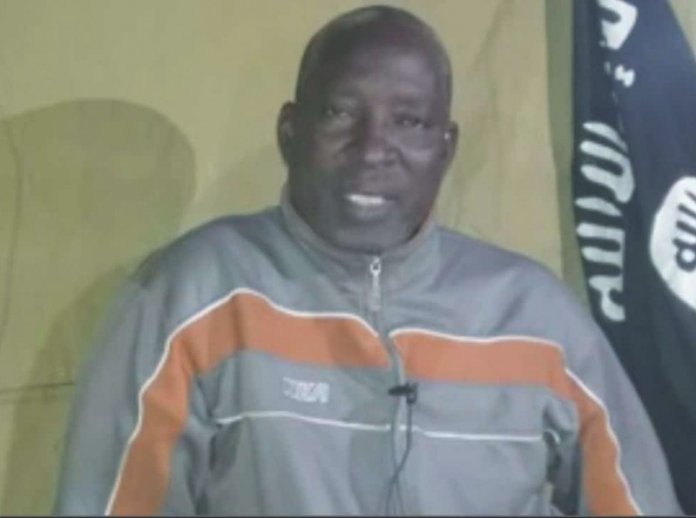 Last week’s killing of Rev. Lawan Andimi, Chairman of the Christian Association of Nigeria, Adamawa State, by the Boko Haram sect, has further exposed the need for a new and different approach to the security of the land, writes John Shiklam

The news of the killing of Rev. Lawan Andimi, Chairman of the Christian Association of Nigeria (CAN) in Michika Local Government Area of Adamawa State, by Boko Haram insurgents, on Monday has since been greeted with outrage and condemnation across the board.
He was beheaded on Monday by the beastly terrorists and his killing was announced at a news conference by the Adamawa State chairman of CAN, Bishop Dami Mamza, in Yola on Tuesday.

Mamza said the insurgents had demanded for £200 million, rejecting the ransom of N50 million that was offered to them.
“Negations were still ongoing when they stopped calling. They were offered N50 million but they rejected it. They called his wife last week, informing her that they will be beheading him on Saturday (January 18) but somehow, they waited till Monday (January 20),” reports quoted Mamza as saying.

The CAN chairman also dismissed claims by security agencies, especially, the military that Boko Haram had been defeated, urging the federal government to tell Nigerians the truth.
He lamented the constant attacks on Christians in the country, citing the killing of Pastor Dennis Bagauri of the Lutheran Church in Mayo-Belwa, Adamawa State, by suspected kidnappers on Sunday.
Andimi’s murder is just one of the many horrific and barbaric killings being unleashed on Nigerians by the insurgents in the North East and armed bandits across the country.

On Christmas Eve, a faction of Boko Haram affiliated to the Islamic State (IS), killed 11 Christian abducted in Borno State, claiming that the killing of the Christians was done to avenge the deaths of the IS leader, Abu Bakr al-Baghdadi and its spokesman, Abul-Hasan Al-Muhajir, who were killed in Syria in October, 2019.
The Islamic State in West Africa Province (ISWAP) had earlier killed four abducted aid workers of the Action Against Hunger, an international non-government organisation.
While in captivity, Andimi had, in a video clip that went viral on the social media, appealed to the Adamawa State Governor, Ahmadu Fintiri, to rescue him.

“…I am appealing to fellow reverends particularly my President, Rev. Joel Billy, who is a strong man of love that he will do his best to speak with our governor and other necessary agents for my release…
“By the grace of God, I will be together with my wife, children, and colleagues and if the opportunity has not been granted, then, maybe it is the will of God.

“All well-wishers and colleagues should be patient. Don’t cry, don’t worry but thank God for everything,” Andimi said in the video.
President Muhammadu Buhari, in a statement on Tuesday in Abuja, by his Senior Special Assistant on Media and Publicity, Mallam Garba Shehu, condemned the killing and described it as cruel, inhuman and deliberately provocative.

He said the terrorists killed the clergyman while indicating their willingness to set him free by releasing him to third parties.
Condoling with the Christian community all over Nigeria, the government and people of Adamawa State as well as the family of the deceased, Buhari said the terrorists would continue to pay a heavy price for their actions, as they would eventually be defeated.
He appealed to nations supporting the Boko Haram and the Islamic States in West Africa (ISWA) terrorist groups, whose only goal was to sow death, violence, and destruction in the sub-region, to end such support.

Also, in its reaction the Northern States Governors Forum (NSGF), described the killing as barbaric.
Chairman of the forum and Governor of Plateau State, Simon Lalong, in a statement in Jos, the state capital, said the forum remained united in supporting security agencies to put terrorism and all forms of criminality that threaten the unity of the country along ethnic, religious or political lines in check.
President of CAN, Rev. Samson Ayokunle, said the leadership of the association and the Nigerian Church are deeply saddened with the gruesome murder of Andimi.

The CAN President, in a statement, recalled the passionate appeal by the deceased to the leadership of his church and the federal government to come to his rescue.
He said the Church did everything within her power to secure the safe release of the pastor but it was not possible, because the church does not have the military power to do so.

“The church views the unabated kidnappings, extortions and killings of Christians and innocent Nigerians as shameful to the government, that each time it boasts that it has conquered Boko Haram. “It is reprehensible and saddening that each time the government comes out to claim the defeat of the insurgency, more killings of our people are committed,” said CAN.

He stated further that, “In the light of the current developments and the circumstantial facts surrounding the prevailing upsurge of attacks against the church, it will be difficult for us to believe that the federal government under President Buhari is not colluding with the insurgents to exterminate Christians in Nigeria bearing in mind the very questionable leadership of the security sector that has been skewed towards a religion and region.

“Is that lopsidedness not a cover up for the operation of the insurgency? If not, why couldn’t the well equipped security agents of Nigeria get this man rescued?”
CAN therefore called on federal government to ensure the release of Leah Sharibu and other victims in the Boko Haram and ISWAP captivity before it is too late.
In its reaction, the leadership of the Nigerian Supreme Council for Islamic Affairs (NSCIA), condemned the killing of the pastor.
Head of Media and Communication of NSCIA, Aselemi Ibrahim, in a statement in Abuja, said the Islamic body was shocked over news of the killing of Andimi.

“We condemn it in the strongest terms. It is barbaric, provocative and a flagship example of man’s inhumanity to man. The Council believes that Boko Haram is trying to make the country ungovernable and to incite Christians against Muslims in Nigeria.
“The Council hereby expresses her heart-felt condolences to the immediate family of Andimi in particular and the leadership and members of the CAN, in general,” the statement said.

NSCIA urged CAN to be wary of the comments and statements it puts out in the public domain, so as not to play into the antics of the enemy.
“We should think through and be sure that our comments are in the interest of national peace, security and cohesion. We want to state unequivocally that we are committed to a united Nigeria, where everyone is protected and free to practice his/her religion without any encumbrances,” the Islamic body said.
It also called on the federal government and the security agencies to be alive to their responsibilities of protection of lives and property.

Rev. Joseph Hayab, Chairman of the Kaduna State chapter of CAN, in his comments, urged the federal government to take urgent and decisive action against the Boko Haram insurgents and other criminal elements that are making life unbearable for Nigerians.
He said the usual condemnation of these killings by government without any concrete action was not enough, adding that the news of the killing of Andimi by Boko Haram has added to the sorrows, pains and suffering that the Church was facing in Northern Nigeria.

“This sad news is coming just a day after our dear President Buhari met with the British Prime Minister. What other evidence do those in authorities in Nigeria want from us to convince them that our members, pastors and fellow citizens are no longer safe?
“We have said condemnation of atrocities without any concrete action is not good enough. What we are hearing and seeing is increase in fear by our people. How do you expect a person living in fear to do something meaningful for himself and his country? We are praying for divine intervention since no one knows who is the next target,” Hayab said.

The killing of Andimi has brought to the front burner the compelling need for states adopt strategies to protect the lives and property of their citizens, a responsibility the constitution places directly on the shoulders of the governors.
This is however imperative considering the increasing security challenges, occasioned by kidnappings, armed robbery and banditry across the country.

While criminals go about unleashing mayhem on the people with sophisticated weapons, security operatives go about arresting people, who are in possession of ordinary machetes and Dane gun in the name of recovering weapons.
It is the responsibility of states to protect and ensure the security of their citizens. If the Adamawa State government had initiated strategies to protect its citizens, Andimi would not have been abducted the way the terrorists did.

Unfortunately, even when communities adopt strategies to protect themselves, security agencies undermine them by arresting them for being in possession machetes and Dane guns while bandits, who carry sophisticated weapons go about with their deadly activities.
The security agencies have been doing their best, but they seemed to be overstretched and ill equipped, given the size and population of the country.

Governors of the Southwest have taken the bull by the horns by establishing a joint security outfit known as operation Amotekun, which many Nigerians see as the solution to insecurity, while others including the federal government are opposed to it.
The federal government must, in fact, stop seeing things from a parochial point of view and start looking at the larger picture about the security situation.

Security is a direct responsibility of state governors. The killing of Andimi should open end the controversy trailing the security outfit by the Southwest governors for the commencement of engaging discussions on the way forward.