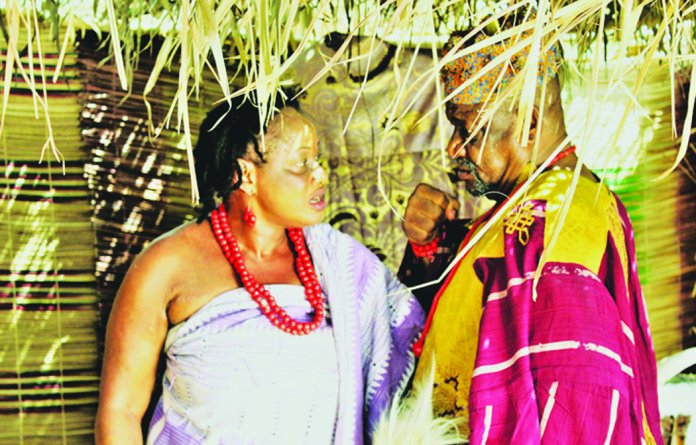 Since the release of the trailer for the movie, Efunsetan Aniwura, there has been a surge in the number of conversations around the movie over the last couple of weeks. Ferdinand Ekechukwu reports

“Some stories shouldn’t be told, while some shouldn’t be forgotten.” The words reel from a brief narration in the opening sequence of the trailer for the upcoming movie, “Efunsetan Aniwura”. Apparently, the story of Efunsetan Aniwura in that sense, is one story that ought to be told and not to be forgotten. The trailer opens with the birth of the baby “Efunsetan” (which is the movie opening proper). The epic historical tale tells the story of the second Iyalode Ibadan. It is a story of the strongest and wealthiest woman in Yoruba history and is due to hit cinemas very soon.

Over the last couple of weeks, since the release of the trailer of the remake of the movie, Efunsetan Aniwura, there has been a surge in the number of conversations around the movie, produced by Funmi Holder and directed by Joshua Ojo. Holder is no novice in the art of filmmaking. She has movies and TV shows like The Grudge and MNET’s Tinsel, a daily drama series on DSTV platform, under her belt. But her latest project, Efunsetan Aniwura with the casting of Clarion Chukwurah and Alex Usifo in the roles of Efunsetan and Latosa respectively has come under a lot of heat.

In the short visuals, Clarion Chukwurah displays raw emotion convincing and provocative enough. Theatre viewers will be the judge to say if it’s worth the heat or not when it eventually premieres in cinemas on January 31. Efunsetan Aniwura, who lived in the 1800s was one of the most powerful and influential Yoruba women in Nigeria. She moved to Ibadan after her marriage to her husband Ajani and became so influential. This story details her trials, triumphs and eventual fall from grace.

The movie cast ensemble includes Shola Fosudo, Adewale Eleso, Funmi Holder, Jaye Kuti, Yemi Solade, Adunni Ade, Sola Fosudo, Binta Ayo Mogaji. The legendary Iyalode of Ibadan is a fascinating subject, not only to Holder but to historians and other creatives who had also captured the legend in various mediums. According to a recent report, there was Prof. Akinwunmi Ishola who brought the story to the stage in the sixties. A film adaptation of the play by Ishola was directed by Tunde Kelani in the last decade.

Aniwura attracts such fascination because of the intrigues wrapped around her personality. Born in Egbaland, Aniwura was respected as an astute businesswoman and political leader. However, the part of her lifestyle that is often seen in the public domain is her ruthlessness as a result of her inability to conceive after losing a child at childbirth. The iconic woman’s downfall came in 1874 when she ran into bad luck with Aare Latoosa, the de facto leader of Ibadanland.

Their feud stemmed from Aniwura’s growing influence in the town which Latoosa considered a threat to his throne. She eventually died on June 30, 1874. Her death has been a subject to historians who plumb the true happenings that led to her death. Two accounts so far hold sway. One narrates how Latoosa used her adopted son Kumuyilo to kill her. Another posits that Aniwura drank poison when Latoosa came to arrest her.

In Holder’s movie, these accounts are verified and the truth is unveiled. She said: “We went to the family house, met some members of the extended family. They were very receptive from the outset. They gave us their full support. I did a full interview with one of the prominent family members. I have everything recorded on tape. Part of her story we get to hear is that she was this wicked woman that was killing everybody. We don’t really get to hear about her good side and what led to those violent actions that are being projected so much.”