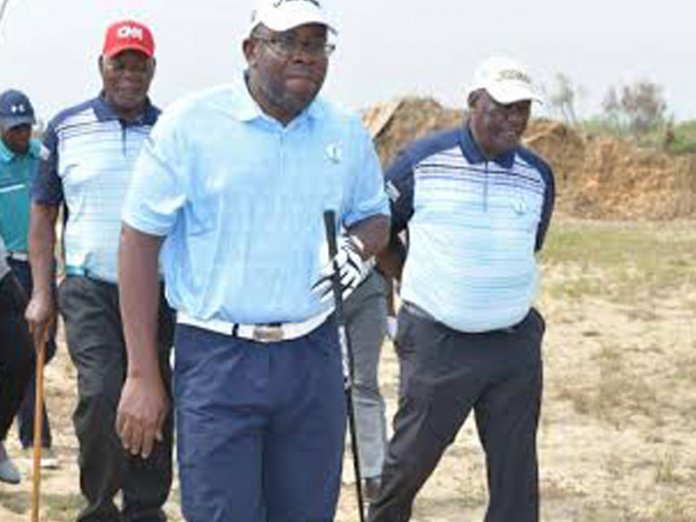 Life President of Nigerian Professional Golfers Association, General Ibrahim Haruna (rtd), prominent legal luminary, Mr Joe Gadzama (SAN) and King Alfred Diete-Spiff who is the Amanyanabo of Twon Brass, have commended the Bayelsa State Governor, the Honourable Seriake Dickson for establishing the Bayelsa Golf Course. The top golfers who converged on Yenagoa for the inauguration of the Bayelsa State Golf Course, did not hide their feelings on the 18-hole golf course while commending the governor for his foresight and commitment in establishing the sporting and recreational facility. Gen. Haruna (rtd) who spoke just as the facility was officially opened, described the 18-hole golf course as world-class with capacity to generate employment opportunities and revenue for the state and called on succeeding governments to take the investment seriously.

Haruna said ” His Excellency, we praise you for this initiative and for your vision. We pray that those who will succeed you will see the long term vision and wisdom in initiating this golf course and the properties that will be developed around here.

“This is a money spinner and if I may say so, in the future it will make much more returns than it will get from the stock exchange. We should keep the vision on and develop it because it is something that will be beneficial to everybody from the lowest man in the social strata to the elite,” observed the retired army general.

Prominent lawyer, Joe Gadzama, who took time to enjoy a round of golf at the 18-hole course also commended Dickson for translating the noble dream to reality and assured that he would do everything within his reach to ensure that the objectives that inspired the crucial project are achieved.

“This is a dream come true because going through memory lane, I remember how my good friend told me he wanted to build a befitting golf course in Bayelsa when he was elected governor

“And one thing we must remember is what has come to play on this golf course, which is merit. When he made me a member of the sports committee, I advised that the chairman, King Diete-Spiff should come with me to see what has happened in Ilara Mokin in Ondo State.

“We went and saw it and then recommended the contractors who built it to his Excellency the Governor. Today, I’m a happy man and I’m here to celebrate with you. I give kudos to the Governor. This is one of the major legacies you are leaving behind and it is going to grow to become better than what we have in Ilara Mokin, ‘’ Gadzama told the golfers who came in from different countries for the inaugural tournament.

In a separate remark,, the representative of the contracting firm, Mr Jeff Bruster, noted that the Golf Course would go a long way in attracting investors and tourists to the state, which according to him has its irrigation fully computerized with 22 kilometers of drainage pipe, 17 kilometers of wiring between the sprinklers among other components.

The state Governor who is due to leave office on the 14th of February 2020, expressed appreciation to the professional golfers who came from within and outside the country to participate in the inaugural tournament and commissioning ceremony in his honour.

He however noted that he drew inspiration for the project from the IBB Golf and Country Club in Abuja, specially thanked Senator David Mark and the Chairman of the State Traditional Rulers Council, His Royal Majesty, King Alfred Diete-Spiff for their support and encouragement.

The Governor explained that the decision to convert the former Castle originally meant to serve as Governor’s Lodge to the present Royal Tulip Hotel was taken in the best interest of the state.

The Golf club is built on reclaimed /sand filled land as part of a housing estate that will consist of over 200 residential units. It is also a design/build project constructed by Total Golf Construction of Vero Beach, Florida, USA with prominent designer Ronald M. Gari from Lakeland USA. It will play from 7,015 yards (6,366 meters) from the championship tees and 5612 yards (5,092meters) from the forward tees.

The course has eight lakes covering in excess of 180,000 square metres. While one of the lakes will be used as an aqua diving range.

According to Dickson who took time to play with some of the guests, said the hotel which is now functional with recreational facilities such as the golf course and Polo Club surrounding it would go a long way in boosting tourism, investment and internally generated revenue base of the state.