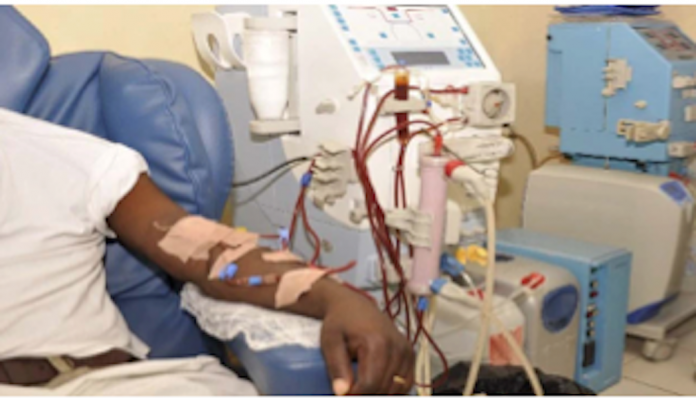 The number of Nigerians suffering from kidney disease remains on the rise and has been worsened by inadequate facilities and the high cost of treatment, writes Martins Ifijeh

With recent details from the Global Report on Care Delivery and Kidney Disease, at least 700 million persons around the world have one form of kidney problem or the other, representing about one in every 10 people globally.

Although the prevalence is said to be higher in high-income countries like the United States, Canada and the United Kingdom, many of such countries have considered chronic kidney disease as one of their healthcare priorities, as compared to most low income countries, who despite having an increased prevalence on the issue, do not consider it one of the diseases they must prioritise solving.

One of such low and middle income countries not taking the issue of kidney disease seriously is Nigeria despite having over 36.8 million of its citizens suffering from one form of kidney disease or the other, representing about 23 per cent of the country’s population, according to available statistics.

This figure, which shows one in every seven Nigerians suffers from some form of kidney disorder, has therefore prompted experts to raise alarm that Nigeria is sitting on a keg of gun powder waiting to explode if nothing is done to quell the rising prevalence of the menace in the country.

They believe stakeholders, as well as the government, have not zeroed into tackling the issue head on, as the country has failed to put facilities in place to match the rising problems occasioned by the disease in the country.

They are also of the opinion that Nigerians must be educated on what to do to prevent the disease as well as how to manage it.

A Nephrologist, Dr. Benson Ariye, explained that over 50,000 Nigerians should be on dialysis in Nigeria, but that only about 1,000 persons are presently undergoing dialysis in the country, which is one of the reasons a lot of Nigerians are dying from the disease daily.

He explained that it is rare surviving kidney failure without undergoing dialysis or kidney transplant, adding that if government must protect its citizens from dying from preventable illnesses like Kidney failures or other forms of diseases, then it must put facilities in place to combat the issue.

According to him, the bulk of those suffering from the disease in the country are poor or low income earners who may be unable to afford treatment in India, Canada or the United States.

“The only institution they can rely on for support is our government. There should be availability of facilities to treat the various forms of kidney disorder in the country.

“Only a handful of hospitals in the country presently have these dialysis machines, which ideally should be spread across the country to tackle issues of kidney failure.”

He said one of the reasons why proactive measures must be taken was because the peak prevalence period for chronic kidney disease was between 30 and 50 years, representing the man power shortage and economic waste, adding that “Nigeria cannot afford to lose its active citizens because of inability to provide facilities to combat the health issue.

While lamenting the burden of the disease, he said estimated 15,000 new patients were being diagnosed every year in the country, making the number of persons needing treatments to increase markedly annually.

Ariye also called for the subsidisation of kidney treatments in the country as most sufferers were unable to afford the treatments. “An average Nigerian would most likely not be able to undergo adequate treatment of chronic kidney disease (CKD) which is on the rise”.

Despite the thousands of Nigerians who present their cases to the hospital, Ariye believed this represents just a tip of the iceberg of the entire burden of CKD, because majority of those suffering from end stage renal failure or other forms of kidney disorder often do not present their health issue to the hospital on time due to lack of awareness, prohibitive cost of healthcare services or use alternative treatment like spiritual healing and traditional methods.

He said awareness on early presentation was also key to reducing the disease in the country.

The World Health report in 2002 and Global Burden of Disease Project reports show that kidney disease represents the 12th cause of death and 17th cause of disability in the world.

The report also believed this may be an underrepresentation of the contribution of Chronic Kidney Disease to global burden of disease.

Some experts however believe this figure may best suit that of developed countries as kidney disease is reportedly becoming a very high cause of death among people living in under-developed and developing countries, including Nigeria.

“In Nigeria, the situation is such that chronic kidney disease represents about eight to 10 per cent of hospital admission even though we know more than 50 per cent of people with the disease do not present their case to the hospital,” says a Medical Officer, Brooks Memorial Clinic, Benin, Dr. Kenneth Ifidon.

He said this goes to show that the prevalence of the disease was increasing in the country even though kidney care facilities do not match the numbers of people presenting their cases to the hospital.

According to him, hypertension is the leading cause of kidney failure in Nigeria, adding that it often presents no symptoms until it is at the advanced stage. “This is another reason why people should not just assume that since they are walking and not feeling any health issue, then there is no need for checkups.

He said diabetes has been established to be the leading cause of kidney failure in the country, hence the need for people to prevent things that predisposes them to diabetes. Adding that, “diabetes occurs when the blood glucose levels are excessively high.

“Tiny amounts of proteins in urine are an early sign of kidney damage in patients with diabetes.”

On HIV/AIDS, he said it increases the loads on the kidneys and may lead eventually to its failure, hence the need for people to be cautious about habits that predisposes them to risks of contracting HIV/AIDS.

He said people must understand that the kidney is one of the most important organs of the body because of its enormous responsibilities and that attention should be paid to the kidney, while living a healthy lifestyle.

According to him, “while taking measures to preventing hypertension, diabetes and HIV/AIDS, direct healthy lifestyle will also go a long way in keeping the kidney healthy.”

He said avoiding caffeine addiction was one of the best ways of keeping the kidneys in check. “People who drink multiple cups of caffeine beverages each day are often at risk of forcing the kidney to work harder in pumping out the toxins in the caffeine, which overtime makes the kidney weak.

“If you find that you are urinating several times a day more than you used to, try cutting back on caffeine products to see if that helps. Too much caffeine is not good for your body in many ways, and kidney stress is one of them.”

He also explained that drinking of water was very vital to the health of the kidney. “People who drink plenty of water daily are less likely to have kidney disease because even though the kidney acts more as a filter than a reservoir, toxins can build up if there is not enough water pressure to push them through to the urinary tract for excretion.

“We know there are people who do not like drinking water except extremely necessary, but it shouldn’t be so. If you want to keep your body healthy, drink enough water,” adding that eating of fruits like water melon also goes a long way in keeping the kidney healthy.

He said it is worrisome that treatment of kidney failure in the country has not been subsidised by the government, as poor patients continue to find it difficult accessing treatment.

According to him, a patient with kidney failure has a three to five hour dialysis treatment; three times per week while this treatment would only replace about 10 to 15 per cent of the function of healthy kidneys.

“Undergoing a session of dialysis in the country costs about N40,000.00, which means in a week the patient would have spent N120,000.00. This perhaps will continue for a long time. How do we expect the poor Nigerians to pay for this treatment?” He queried.

He said an outright kidney transplant cost an average of N4.5m outside the provision of a donor. “Though most donations are free because they come from relations and family
members, but the determination of whether their organ is suitable for surgery or not are often investigated most times abroad thereby compounding the cost. After surgeries, patients must live on drugs to keep the foreign organ in check and these drugs are taken throughout a lifetime and they are expensive,” he added.

He stressed that a government that puts its citizens first must design ways of making this treatment available and affordable for the ordinary citizens and people who also live in rural areas where there are hardly healthcare facilities.