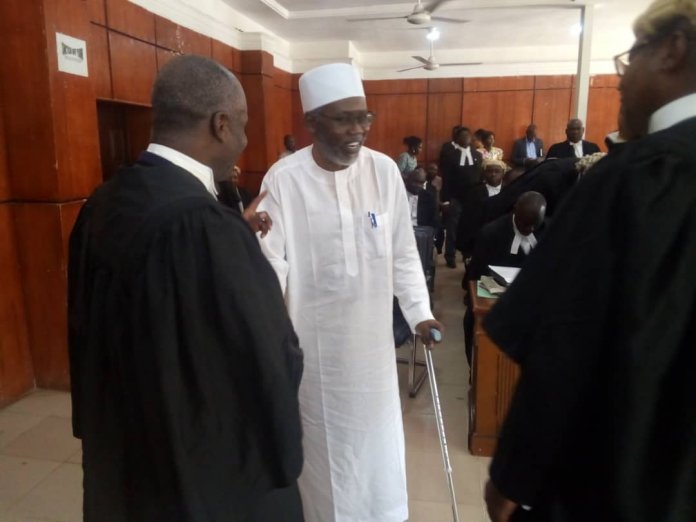 The Economic and Financial Crimes Commission (EFCC) on Wednesday arraigned former Attorney-General of the Federation and Minister of Justice, Mohammed Bello Adoke, over his alleged complicity in the $1.1bn Malabu oil deal.

Adoke was arraigned before Justice Idris Kutigi of the Abuja High Court, Gwagwalada, along with Aliu Abubakar and Raski Gbinigie.

The federal government had on Monday filed a fresh 42-count charge against Adoke and six others over their alleged complicity in the $1.1bn Malabu oil deal.

In the fresh charge with number CR/151/2020, filed at an Abuja High Court, FG alleged that Adoke and other respondents received gratification to carry out a fraudulent oil deal.

According to the FG, as Attorney-General, Adoke mediated controversial agreements that ceded OPL 245 to Shell and Eni, who in turn paid about 1.1 bn dollars to accounts controlled by a former Petroleum Minister, Dan Etete.

Since he left the country after the administration of former President Goodluck Jonathan, Adoke only returned into the country on December 19, 2019 from Dubai, United Arab Emirates, into the waiting arm of operatives of the Economic and Financial Crimes Commission (EFCC) at the Nnamdi Azikiwe International Airport, Abuja.

Adoke who fled the country in 2015, has pending criminal charge brought against him by the EFCC for alleged abuse of office and money laundering in respect of the granting of the Oil Prospecting License (OPL) 245 to Shell and ENI.

According to the charge, the former AGF in August 2013 in Abuja while serving as a minister knowingly received United State Dollars equivalent of N300million which is reasonably suspected of having been unlawfully obtained and thereby committed offence punishable under Section 319A of the Penal Code, Cap. 532laws of the federation of Nigeria 1990.

The FG charge signed by Bala Sanga on behalf of the EFCC Acting Chairman, Ibrahim Magu, further said that one of the accused persons, Rasky Gbinigie conspired with Munamuna Seidougha (at large), Amaran Joseph (at large) and Dauzia Etete (at large), sometime in 2013, in Abuja, dishonestly used as genuine the forged form CAC 7 and Board Resolution of Malabu Oil and Gas Limited and the letter of resignation of one Mohammed Sani to open a Bank Account No. 2018288005 with First Bank of Nigeria Plc to receive the sum of $401,540,000.00.

In count seven, Adoke was said to have in September 2013 knowingly and unlawfully obtained the sum of US dollars equivalent to N367,318,800 and thereby committed an offence punishable under Section 319A of the Penal Code, Cap.532 laws of the federation of Nigeroa 1990.