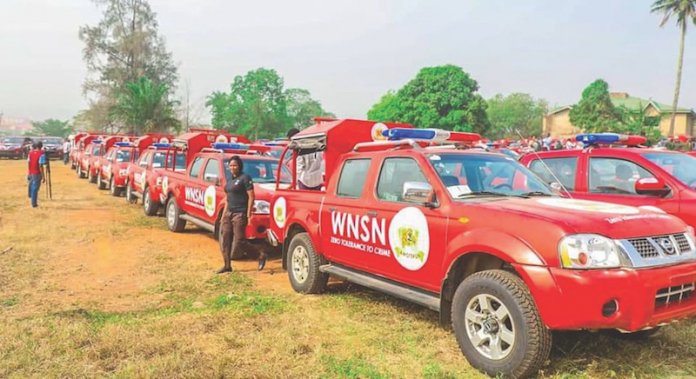 Youth groups under the umbrella of Yoruba World Congress (YWC) are to hold a support rally for the Western Nigeria Security Network codenamed Amotekun on Tuesday.

The rally will hold in the capital cities of the six South-west states and Ilorin, the Kwara State capital, according to YWC convener, Prof. Banji Akintoye.

Akintoye, a renowned historian, disclosed this during his visit to the Development Agenda for Western Nigeria (DAWN) Commission, in Ibadan at the weekend.

He said the rally would boost support for the governors of the six states promoting Amotekun.

He said Ilorin was added because Kwara is largely, a Yoruba state.

Akintoye called on Yoruba- speaking people to rally round the six governors, stressing that the setting up of Amotekun is a good job.

He said the Yoruba people owe them the duty of standing up to speak with one voice.

He urged the DAWN commission, being the body in charge of championing the development of the region, to coordinate the implementation of the security network.

His words: “You are the coordinating agency for Amotekun; don’t leave the governors for those people that have personal agendas to tear at them.

“Our governors are doing a good job now, we owe them the duty of standing up for them.

“Playing politics and making sniffling little comments at them is unpatriotic at this point.

“You are a powerful organisation, so you will find your own way to do it but we need to do it.

He added: “The governors are the solid pillars behind Amotekun and we must make sure they aren’t disoriented and broken up by all these people who have political agenda.”

The historian further said the people in the Southwest region do not have the luxury of time fighting or criticizing anybody over Amotekun.

“I am totally convinced that our governors have led us to something that is capable of turning around that history of Yoruba nation.

“We are on that beginning to do something huge now and our governors may not know it but they have led us unto a big and beautiful part.

“Please let us join hands together. Yoruba World Congress will never attack any Yoruba group or person, we are non-partisan but we must defend what need to be defended and we must have the right strategy for doing so, so that nobody will feel that we are attacking or abusing them.

“We the Yoruba nation, we are going to speak up. By Tuesday, there will be masses of people in the streets in the seven capital towns of Yoruba people.

“We think we should let you know this and there is no other thing. We have people who are going to speak at the venues and it is going to be a show of massive solidarity with the governors,” he said.

Akintoye also urged the commission to involve Yoruba youths in the operation of Amotekun and all other development initiatives.

He said:” I have never seen this much excitement amongst Yoruba youths, people are talking from all over the world.

“An old man like myself can do nothing more than I am doing to you now but when it comes to tasks that needs to be done, it is the youths who must do it, I can’t do it.

“My spirit is strong but by the design of God-the maker of it all, the body is no longer there, that’s how God designed it.

“We must look at how we will put them in this structure , they want to be good and useful.

“Every group that is coming forward to be a part of this, let them be a part of it because a good thing will always have brothers and sisters but don’t let it become an argument. We know our history, we know how to handle ourselves.”