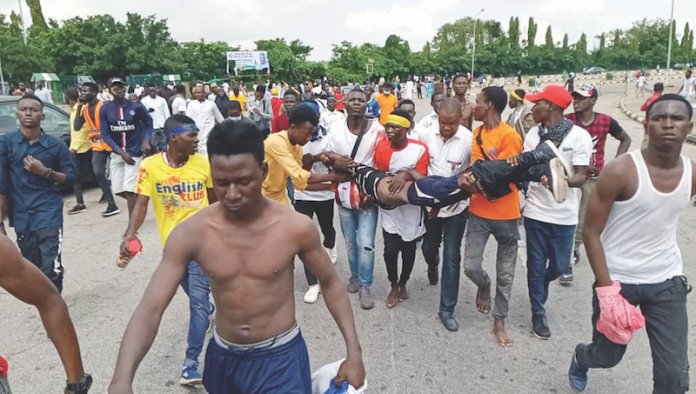 Four members of the Islamic Movement in Nigeria (IMN), also known as the Shittes, yesterday sustained varying degrees of gunshot injuries when their public procession through the Berger area, that served as a buffer between Utako and Wuse, Abuja was disrupted by Policemen.

The members of the sect were marching through the city in the evening in protest against the continued incarceration of their spiritual leader, Sheik Ibrahim Elzakzaky and his wife since December 2015.

Live bullets and several cannisters of tear gas were used by the police on the members of the sect during yesterday’s clash.

The clash occurred during the afternoon rush hour. In the heat of the bedlam, many pedestrians and commuters dispersed in different directions as Police chased the protesters.

Some of the arrested protesters were seen bundled into waiting police vans.

He accused the police of provoking the violence by disrupting a peaceful protest.

He also insisted that it was the constitutional right of the Shiites to assemble in the public.

Yesterday’s clash marked the second time that the Police and the Shiites would be clashing this year.

The religious sect confronted the security agents last week in Abuja, when they protested against the United States for carrying out the assassination of a top Iranian General Qasem Soleimani in an airstrike in Baghdad, Iraq.

There had also been several violent clashes with security agents in the past. A violent clash at the Federal Secretariat, Abuja in July last year, led to the death of a senior police officer, DCP Usman Umar and a youth corps member, Precious Owolabi.