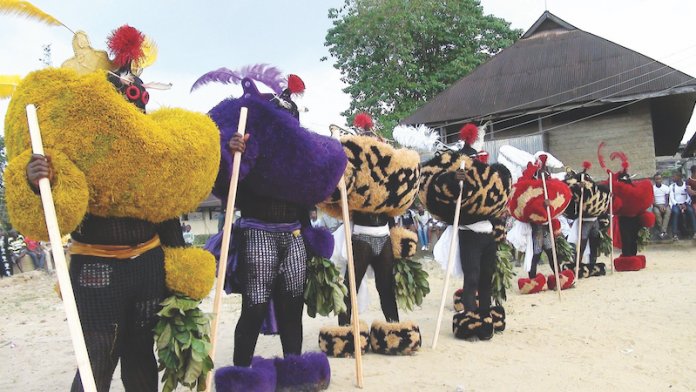 Nigeria is renowned for its potpourri of cultures which is arguably the premier tourism attraction of Africa’s most populous country. One of these vibrant cultures steeped in history is that of the Efik people who occupy the southern part of Cross River State, some parts of Akwa Ibom and across the Nigerian border in Cameroon.

The economy of the Efik was originally based on fishing but the area quickly developed into a major trading centre and remained so well into the early 1900s.

From the 1800s, Christian missions were at work among the Efik who are reputed to be the first to embrace western education in present-day Nigeria.

By this time, many of the native peoples were well educated in European ideologies and culture, professed Christianity and dressed European.

A powerful bond of union among the Efik, and one that gives them considerable influence, is the secret society known as the Ekpe. This society has been transformed into the Abakuá cult in Cuba, the Bonkó cult in Bioko and the Abakuya dance in mainland Equatorial Guinea.

The Ekpe society is exclusive for male, while females have their own Ekpa society.

During the past Yuletide season, the ancient city of Calabar was treated to a special Grand Ekpe ceremony reminiscent of the days of yore when Ekpe was government. For some who have been in the city for at least over forty years, it was the resurgence of forgotten sensory pleasures.

For younger residents, it was a once in a lifetime opportunity to catch a glimpse of the splendour and grandeur of the city their parents and grandparents often speak of with nostalgia.

Mostly referred to as Grandy Egbo by the European ship captains, traders and missionaries, this was a rare and uncommon spectacle.

The festivities kicked off December 29 with the toll of the Sabbath Egbo (Ekpe) Bell as a call to the community to come out for worship, praise and thanksgiving at the Duke Town Presbyterian Church of Nigeria, Calabar.

This was the same bell that rang 170 years ago on Sunday May 20, 1846 to call all residents of Old Calabar to worship at this same church that had been established by Reverend Hope Masterton Waddell at the invitation of King Eyamba V who sought to restore human dignity lost to centuries of slavery and slave trade and usher in a new age of enlightenment.

The Ekpe ceremony was also an opportunity for members of the King Eyamba and Duke Town families to celebrate the 100th birthday of their patriarch, His Royal Highness Etubom Okon Ekpenyong John Eyamba XVI, in grand style on New Year’s Day.

Part of activities for the centenary of the man at the heart of the celebration was the initiation of sons and daughters of the kingdom into the Ekpe society and a competition by Ekpe masquerades from different lodges.

The Efik are known to have a rich masquerade tradition with the most revered being the Ekpe masquerade said to have served before and during the colonial era as the instrument of government to regulate affairs of the land by enforcing cultural values and norms.

The Ekpe society also contributed immensely to the growth of Christianity in the past as the masquerade was also used to ensure that members of the society attend church service when necessary.

As members of King Eyamba and Duke Town families celebrated their patriarch, it was not out of place to see them showcasing this part of their culture through different activities.

Sons and daughters of the Efik kingdom were initiated into their respective societies and a procession was undertaken to Bassey Duke’s effigy as well as other designated points of the city as the families were joined by an affiliate Ekpe group from Ugep Eburutu.

A day after, the decorative fence housing the sun disc known in the local parlance as “Itiat Ekpe Efik Iboku” was unveiled with the grand finale, a competition by Ekpe masquerades from different Ekpe shrines.

The climax of the celebrations was the Nyoro festival which again was started by King Eyamba V when he organized an Ekpe display competition in honour of, and to welcome the missionaries who arrived Calabar in April 1846.

In contemporary times, Nyoro Ekpe display is the climax of a series of events hosted by the revered Ekpe society usually held during the Christmas and New Year holidays when Cross River Indigenes and holiday makers worldwide converge in Calabar.

Already an established event with very high patronage locally, it provided the inspiration for the now famous Calabar festival.

Nyoro is a culturally and intellectually relevant event aimed at entertaining, enlightening and uniting the Efik people.

Through a series of intricate footwork, signs and body language known as “catwalk” which imitates the lion and the leopard, participating Ekpe masquerades competed through a display of their skill, dexterity, understanding and interpretation of what Ekpe represents before a panel of judges and an audience.

Based on their performance, scores are awarded and a winner emerges. At the end of the competition, Ikoneto town emerged winner while the first runner up was Atakpa and Ugep Eburutu came third.