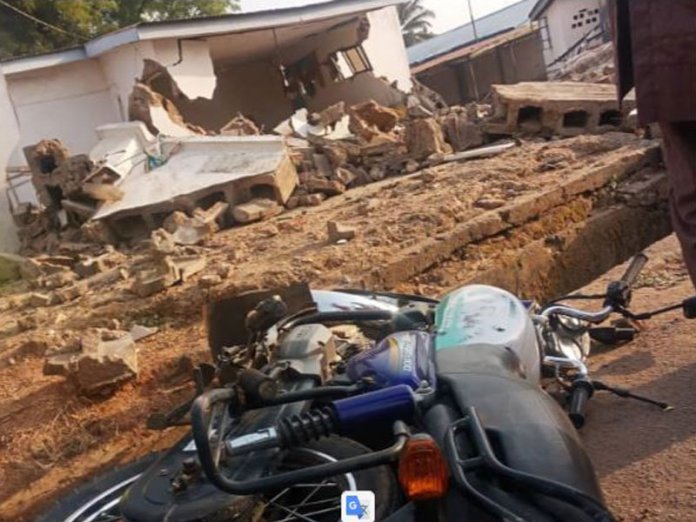 The state government, however, said that, the property demolished was a shed occasionally used for political gathering and never a place where old women were being quartered.

The state’s Commissioner for Communication, Mr. Murtala Olarewaju stated this in a statement issued last night and made available to journalists in Ilorin, the state capital.

He said that the whole narrative about government demolishing old people’s home was a fabrication by the opposition to cover up for their lack of any document confirming their ownership of the property bordering the civil service clinic in Ilorin.

Olanrewaju stated that, “the AbdulRahman AbdulRazaq’s administration currently holds the trophy as the most gender-friendly government in Africa with at least 56 per cent of the cabinet being women, while some other top government positions are held by females.

“The government is also embarking on so many initiatives, including the social investment programme and health insurance scheme due for launch this quarter, targeted at taking care of old people, especially women”.

He stressed that, “the property is one of the over 100 government assets in GRA, Ilorin Kwara State, Victoria Island Lagos, Kaduna, and Abuja investigated by the Asset Recovery Committee led by Senator Suleiman Ajadi, which were unlawfully converted to private use. Until its physical reclamation, the property comprised only of sheds”.

The commissioner explained that, “the property was never an old people’s home, nor was it residential; nobody lived there.

“The property has always been a security risk. No fewer than 97 people, mostly women, have died in mysterious stampedes in that facility as they scampered for handouts”.

Olarenwaju noted that, “there were yearly mass deaths in the said property in November 2010, June 2011, and October 2013. A google search will instantly reveal these sordid facts, which were widely published in the media.

“Contrary to the claims by the opposition, the physical reclamation of the property by the government on January 2, 2020 was without any incident.

“Nobody was met on the property. It was never a place where people lived in; so, the question of ejecting, maltreating or deploying violence against anyone did not arise. No court process has been served on the government”.

He pointed out that, “without any legal basis to claim the property, the opposition later that morning (January 2), mobilised some women to stage a protest in which they portrayed the government as attacking old people who were quartered there. This is an outright fabrication.

“The government strongly condemns the use and abuse of vulnerable and indigent old women for propaganda purposes.

“This administration can boldly claim the trophy for being the most gender-friendly sub-national government in Africa in recent history with a 56per cent-woman cabinet. Furthermore, women are heads of key government institutions like the Civil Service Commission, the Kwara State Internal Revenue Service (KW-IRS) as well as the Head of Service.

“The conditional cash transfer component of the programme has in fact been designed to favour old people to stamp out destitution and extreme poverty. The law setting up the Kwara State Social Investment Programme was recently passed by the State House of Assembly.

“The first quarter of this year will also witness the government formal launch of the State Health Insurance Scheme, mostly targeting the poor, especially our senior citizens. We urge members of the public to ignore the disinformation about the status of the said land and the events of the last few days as the opposition only seeks to distract attention from the main issues of probity, accountability and good governance.”