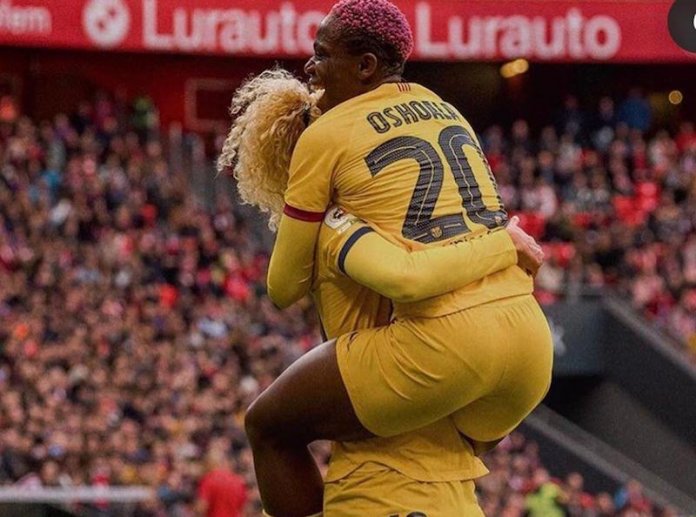 Barcelona Femini opened up a seven-point advantage at the top of the Spanish Primera Iberdrola as substitute Asisat Oshoala scored twice in a 3-0 victory at Athletic Club yesterday.

The Catalan giants showed no sign of fatigue after resuming from the Christmas celebration break as they condemned fourth-placed Atletic Club in front of their home fans at San Mamés Barria.

Having seen his side held to a 0-0 draw at half time, Lluís Cortes brought in Oshoala as a replacement for Lieke Martens in the 60th minute and Mariona opened the lead for Barca four minutes later.

In the 77th minute, the Nigeria international received a perfect cross from Kheira Hamraoui and made no mistake to head home from close range to double the advantage for the visitors.

Four minutes from full time, the three-time African Women’s Player of the Year saw the ball from a goalmouth scramble fall onto her path and she fired home her second to guarantee the victory.

Oshoala who came on for the fifth time as a substitute this season played the final 30 minutes to hit her ninth and 10th goal in 13 league outings for Barcelona, with the brace her third this term.

Oshoala is expected to attend the CAF Awards Gala in Egypt on Tuesday, where she will be hoping to clinch her fourth African prize following her exploits in 2019.

The victory saw Barcelona earn 40 points after 14 matches and move seven points clear of nearest challengers Atletico Madrid, who were held to a 1-1 at Rayo Vallecano.

Barcelona will seek to maintain their impressive run when visiting Osinachi Ohale’s Tacon in Madrid for their next league fixture on January 11.