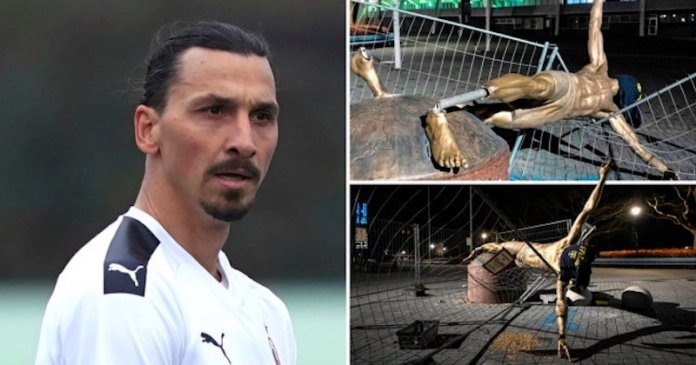 Vandals have toppled a statue of former Sweden striker Zlatan Ibrahimovic by sawing it off at the ankles.

Former Ajax, Juventus, Inter Milan, Barcelona, Paris St-Germain, Manchester United and LA Galaxy player Ibrahimovic has just re-signed for AC Milan and is expected to make his second debut for the Serie A side today when they host Sampdoria.

The statue, which is outside Malmo’s stadium in Sweden, previously had its nose cut off after Ibrahimovic invested in a rival club in December.

The damage was discovered at 3.30am local time on Sunday, and there was graffiti reading “take away”, written in Swedish, next to the statue.

Ibrahimovic, 38, made his professional debut for Malmo 20 years ago.

The statue’s face was also covered by a shirt bearing the Swedish badge.

A spokesperson for the Malmo municipality’s sport and recreation department told BBC Sport the statue has been taken away for repairs.

They added that the plan is to bring the statue back.

Malmo deputy mayor Frida Trollmyr told AFP: “I can understand that many people are disappointed in Zlatan’s behaviour, but vandalising a statute is simply unworthy.

“Better to express your dissatisfaction in a democratic way.”

The 3.5-metre bronze structure was sprayed with paint, set on fire and had a toilet seat put over its arm after it was announced that Ibrahimovic had bought 25% of the shares in Hammarby.

Police erected a fence around the statue, which was unveiled in October 2019, after an attempt to saw through its feet in December.

Ibrahimovic’s house in Stockholm was also vandalised, with “Judas” painted on the front door.

The statue’s artist Peter Linde has previously appealed for people to stop the vandalism.