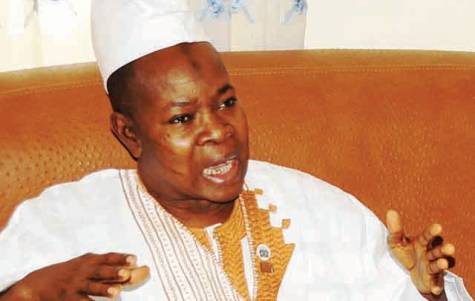 Before his death, was arguably one of the wealthiest men in Nigeria. He had his fingers in many pies, including food production, real estate management, insurance, transport, and publishing.
His name spread beyond the shores of Africa, and he was one of the few Nigerian businessmen who rubbed shoulders with other top business moguls around the world.

He established a fleet of business outfits under the Lister conglomerate, while he was still in his early 20s. Since the death of the Aare Musulumi of Yorubaland in 2014, the family has not found it easy, enmeshed in a legal issue over debts he left behind.

However, Society Watch gathered that peace might soon return to the family, as a federal high court recently adjourned until February 17, 2020, for First Bank of Nigeria Limited and Lister Flour Mills (the company owned by the late Ibadan business mogul) to file another terms of settlement in a N10.7 billion debt recovery suit pending before the court – the initial terms of settlement filed before the court were alleged to have been aborted.

A source revealed, “When the matter was mentioned, the counsel representing First Bank told the court that the terms of settlement filed before the court could not be adopted because the defendants, Lister Oil Limited Mills and Mrs. Khadijah Alao-Straub, have scuttled the terms of the settlement.

“Consequently, they are fine-tuning other terms of settlement that will soon be filed before the court, once the process is completed. Therefore, the court was urged to grant them an adjournment, which the court acceded to.”
The bank allegedly granted credit facilities to Lister, which were renewed and restructured. It eventually culminated into a debit balance of N10, 787,556,430.02, while the interest continued to accrue.

The securities for the facilities availed the Lister Flour Mills by the bank amongst others include the company’s undertaking, goodwill, and assets, including the entire piece and parcel of land lying being at Idiroko Olomoyoyo, Ibadan – Ijebu Ode Road, Ibadan, Oyo State, Nigeria together with the building or building erected thereon.

The bank, in the exercise of its rights as mortgagee under the deed of the legal mortgage over the Lagos property, appointed a receiver of the property and assets of the Lister Flour Mills. The deed of appointment of the receiver together with the notice of appointment was duly filed with the Corporate Affairs Commission.

The bank and its receiver /manager filed this legal action seeking orders of the court to restrain the defendants or any person acting under their authority or any person whether shareholder, officers, agents, privies and/ or employees from challenging, interfering with or otherwise obstructing the performance of the statutory duties of the Receiver/manager in any manner whatsoever. On February 11, 2015, the court granted the orders as prayed by the receiver/manager.

The defendants, it was gathered, denied all the claims made in the debt recovery suit filed against them and are challenging the appointment of the receiver/ manager over Lister Flour Mills Nigeria Limited as well as steps, which the receiver/manager had taken.

However, the parties have now agreed to settle and resolve this legal action together with other related suits arising from receivership upon the time and conditions stated in the terms of the settlement.