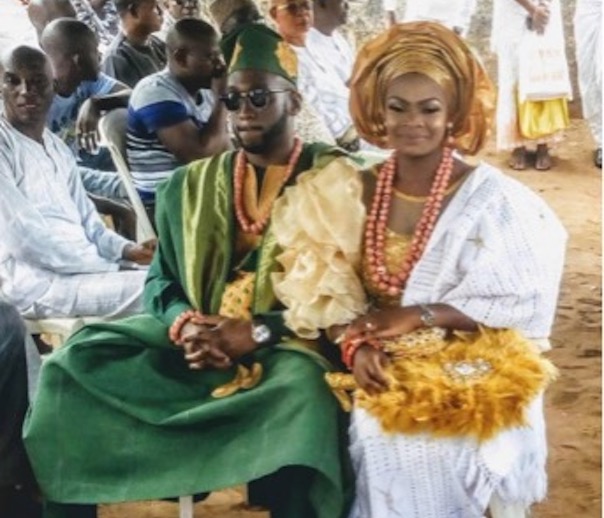 The compound of Chike Ogeah bustled with activities in the late hours of that afternoon. People, drinks, and food were plenty. A highlife song crooned in the air, stirring feet to tap, heads to nod, and shoulders to sway. A wedding was in wait. And everything around the area waited to bear witness.

The groom, Mayowa Awosemo, who works at the Federal Inland Revenue Service (FIRS) and is a graduate of the University of Bradford in Finance and International Relations, stayed in the crowd, sitting in wait for the bride to dance around, finding him, with a cup of wine held between both palms.
The bride, Uche Ogeah, daughter of Chike and Funke Ogeah, who works at ExxonMobil, also a graduate from the Aston University in Birmingham, with a degree in Chemical Engineering, emerged from the crowd, slow-dancing to the music playing in the background. Behind her, some maidens danced, too. All of them clad in native attire.

The groom’s mom is from Etsako in Edo State, while his father is from Ekiti State. And the bride’s mom hails from Ago-Iwoye in Ogun State, and her dad from Asaba in Delta State. So, like their parents before them, they were also marrying across tribes, making the wedding a pan-Nigerian marriage.

The groom, flanked by his kinsmen all clad in agbada, slung the edges of his agbada over his shoulders one shoulder at a time. The bride, slow-dancing with her band of maidens, did a mock search in the crowd for the groom, smiling at and ignoring other men who teased her to pass the wine to them. She finally ended her search at the feet of her man, knelt and passed the cup to him. He took a sip, passed the cup back to her to sip too, then took her hands and helped her to her feet. And they both, to the cheering of the crowd, danced to her parents to seek their blessings. It was a fun evening with a mixture of tradition and modernity at play.