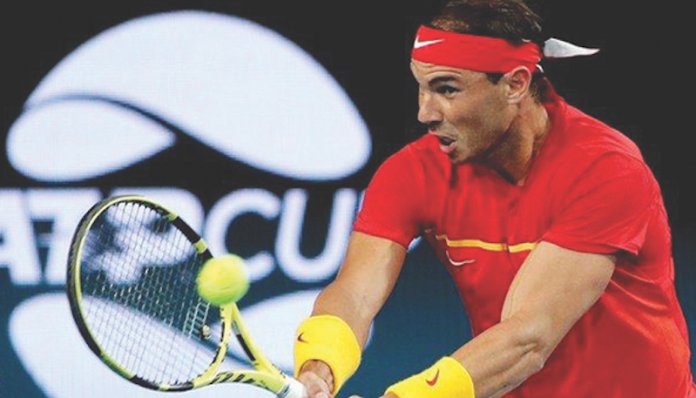 Spain’s world number one Rafael Nadal began his 2020 season by clinching his nation’s opening win against Georgia at the inaugural ATP Cup. Nadal beat Nikoloz Basilashvili 6-3 7-5 to give Spain a 2-0 advantage in the best-of-three tie held in Australia.

Novak Djokovic edged past South African Kevin Anderson to clinch victory for Serbia, while Austria lost to Croatia after Dominic Thiem was beaten. France beat Chile 2-1 in Group A, while Japan and Argentina also won.

On day two of the new tournament, Benoit Paire opened up for France with a 6-7 (3-7) 6-3 6-3 win over Nicolas Jarry before world number 10 Gael Monfils sealed victory in Brisbane by beating Cristian Garin 6-3 7-5.

Japan, without injured former US Open finalist Kei Nishikori, won all three matches against Uruguay in Group B in Perth, while Argentina beat Poland 2-1 in Group E in Sydney.
In the evening session, 32-year-old Djokovic had to dig deep to overcome former Wimbledon and US Open finalist Anderson, who was playing for the first time since July after a knee injury.

Anderson, 33, played aggressively and found the lines to leave Djokovic rattled at several points in a close-fought match, but the 16-time Grand Slam champion edged the tie-breaks to win 7-6 (7-5) 7-6 (8-6).

Anderson failed to capitalise on a set point at 6-5 in the second tie-break, hitting into the net which allowed the Serb to recover and take his first match point with a volley.
That ensured the tie went Serbia’s way after Dusan Lajovic had earlier beaten Lloyd Harris in three sets.

Novak Djokovic needed to produce some of his best tennis to beat Anderson, sparking jubilant celebrations from the reigning Australian Open and Wimbledon champion with the Serbian fans in Brisbane.

Nadal, 33, showed signs of rustiness in his first match after a six-week off-season before eventually seeing off world number 26 Basilashvili in almost two hours.
Nadal looked to be heading to a smooth win after breaking Basilashvili twice in each set, only for the 19-time Grand Slam champion to show even the greatest can have difficultly in closing out matches.

The Spaniard stuttered as he twice failed to serve out victory from 5-2 ahead and allowed Basilashvili to level at 5-5, before breaking straight back and eventually wrapping up the win at the third time of asking.

Nadal’s win, which came after Roberto Bautista Agut thrashed Aleksandre Metreveli 6-0 6-0 in the opening match, meant the Davis Cup champions clinched victory regardless of what happened in the doubles rubber.