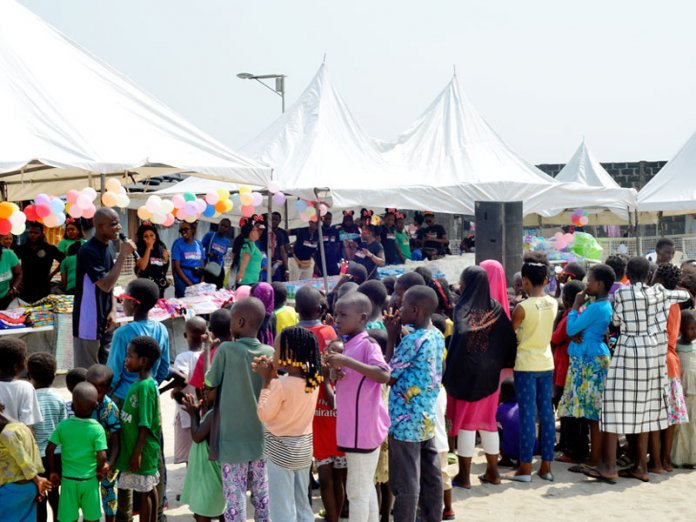 Nseobong Okon-Ekong writes that the recent annual Baby’s Day Out of the Ibidunni Ighodalo Foundation provided a fantastic time filled with different games, dancing, gifts and medical treatment for scores of children and their mothers at the Oniru Field in Lagos

At the sixth edition of Baby’s Day Out, the annual charity organised by the Ibidunni Ighodalo Foundation (IIF) to make Christmas more rewarding and meaningful for children, particularly those under two years, their mothers and pregnant women, volunteers and staff of the organisation demonstrated increasing mastery at what they do.

As the children filed into the Santa Claus grotto in an orderly manner to receive a goody bag, Mrs. Adedayo Richard, Director of IIF, watched closely, taking a happy note of what was going on.

From all indications, the children and their mothers (and the IIF crew) had a fantastic time at the Oniru Field in Lagos, where the event took place. A game arena was created as the comperes encouraged them to show their skill set in outdoing one another at the different sports, for a prize. The test of superiority was carried out in a fun manner infused with mild comedy that engendered lots of laughter, such that those who lost took it all in the spirit of sportsmanship.

The dance contest, both for the children and their mother’s held a special fascination for the spectators and the participants. The music from DJ Shexy was good and it spurred the dancers to be at their best. Deciding who to ease out in order to get the top three dancers was difficult. Every competitor was determined to dance her heart out, making it all the more a hilarious experience.
Every year the event gets bigger and better. This time, IIF collaborated with Paediatric Partners Hospital in Victoria Island to provide the primary course of medical treatment to the children and their mothers, particularly the pregnant ones. Dr. Festus Adejumo and Dr. Chika Muoka who attended to the patients noted that “quite a lot of them had upper respiratory infections and bacteria skin infections. We have seen about four cases that we have referred to the hospital.”

As the event dragged on, a baby in critical condition was brought to the doctors. A cursory examination and interrogation of the parents revealed that the three-day old baby was unceremoniously brought home from the hospital where he was born because of inability to meet his medical expenses. The IIF quickly took up the responsibility and an ambulance arrived to take the baby to the hospital for better medical care. The parents Saleh Yakub and Khadijat were grateful that their baby was given a fighting chance to live.

For Ibidunni Ighodalo, the memory of the intervention to save that baby boy will always live with her. She recounted the experience, “The little boy we saved but eventually died was an amazing rewarding feeling I had. The glimpse of hope and joy in the eyes of the parents that their little one will be treated was priceless for me. Eventually the baby passed on but was in a much better place and not as in so much pain as the day we saw him.”

All the pregnant women got a set of baby bath items. Every woman went home with a piece of wrapper, a mini bag of rice and vegetable oil. They were pleased with the extra food items provided by IIF this year, apart from the cooked meal.
Favour Davis and Victoria Donald, two of the women who participated in the event said they were fortunate to have the critical intervention of IIF at this time of the year.

In addition to handouts, the IIF team, which is largely drawn from Trinity House, a church championed by Ibidunni’s spouse, Pastor Ituah, also preached the Wprd of God. They reminded the gathering that Jesus Christ offers the best hope for any kind of challenge they may be faced with.