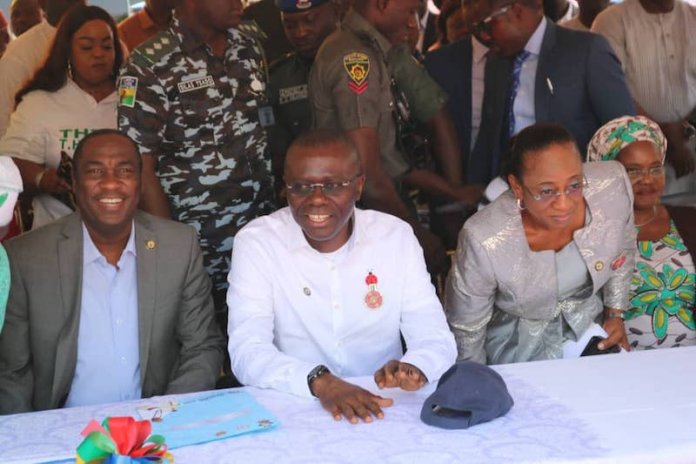 The governor said the roads are expected to decongest traffic gridlock and provide major by-pass/alternate route to Lagos-Abeokuta Expressway, urging residents of area to take ownership of the roads.

Governor Sanwo-Olu said, “Let us protect our network of roads by ensuring that drainage channels are not turn into dump sites. Streetlights must be protected from vandalism. Any motorist who damages the poles should be handed over to enforcement agents to ensure that they pay for the repairs.”

He said, “There should be no overspeeding. We need to be cautious of pedestrians especially children using the roads. Let it be a collective responsibility of all to ensure parking on the roads is not allowed.”

Governor Sanwo-Olu, who described Ojokoro LCDA as a strategic settlement with a fast growing population and needs for infrastructural renewal, assured the residents that his administration will do more roads and projects in other sectors for the benefit of the area.

He added that provision of road infrastructure is central to the delivery of the state’s THEMES Agenda while also advised the residents to in turn safeguard the roads by taking its ownership.

Sanwo-Olu explained that the 31 network of roads was specifically executed to offer traffic relief to the area, improve the soco-economic activities and connectivity within the axis and its neighbouring Ogun state through Segun Adetiba Road and the bridge across Ilo River.

According to him, good road network will facilitates effective management of Traffic and Transport; reduces travel time to access health facilities and educational institutions; the drainages that come with the roads help deflood the environment while the streetlights complement the security architecture of the State.

In a response to request from the Ojokoro Local Council Chairman, the governor also promised to build senior Secondary School for the Akinyele Community in Ojokoro.

In a similar vein, the Special Adviser to the Governor on Works, Mrs Aramide Adeyoye, in her opening remarks, said the driving force behind the 31 commissioned networks of roads is to ensure connectivity and reduce the burden and pressure on major arterial roads and open up local economy.

Adeyoye said the network of roads which are in two phases with 31 streets such as Alh. Luqman Avenue, Odun Alayo street, Santos Avenue and Amusa Agbaje street, Orotayo street, Unity road are connected to each other and would help to ease traffic logjam and also help save travel time to its bearest minimum, improve road connectivity within the environs .

She further emphasised the need for people within the axis to take ownership of the network of roads right from this commissioning because they are been put in place with the citizens commonwealth.

“I urge all community/ religious leaders and the people of Ojokoro and others that will ply these roads to guard jealously the infrastructure being commissioned today and those that would be provided in the near future. Together, we shall build a greater Lagos State.”

The lawmaker also added his voice to the call on the residents to make judicious use of the roads and not to turn the walkways into trading centre.