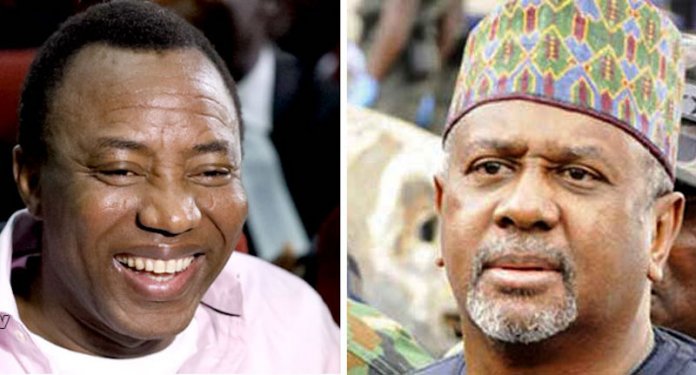 By Eddy Odivwri
Just when Omoyele Sowore thought he would spend his first Christmas, and Col Sambo Dasuki (retd), his fourth Christmas in detention, suddenly, America stretched the hand of God to touch the heart of President Muhammadu Buhari to let the duo go and join their respective families during this Yuletide. For the duo, there can be no greater gift than this much coveted freedom on Christmas eve.
Two weeks ago, I had written to condemn the re-arrest and continued detention of Sowore without any new charge.

As I wrote then: “What is the reason for the re-arrest (of Sowore) by the DSS? What did they suddenly find out in 24 hours which they did not know about Sowore and his plans since August 3 (when he was first arrested)? Why did the DSS not approach the court to amend the charges against Sowore if need be?

It is a show of raw power which casts the service (DSS) in very bad light, as having not weaned itself from the pangs of military grip, twenty years after. It is an angry throwback to the ugly past where the service was seen and used as a hammer to crush all forms of dissent to the sitting government, especially during the military years. This profile cannot fit into a democratic government”

I had wondered why the Buhari-led government was appearing obdurate and negligent of its public image, as it was glaringly becoming notorious for being impervious to good counsel. But nothing seems to have happened.

It took the application of greater international pressure, particularly from America, for President Buhari to listen and comply with the several court orders, granting bail to the duo of Sowore and Dasuki.

The strongly worded letter from the Congress of the United States, dated December 20, and signed by six US lawmakers, addressed to Abubakar Malami, the Honourable Minister of Justice, may have finally thawed the ice. The language of the letter was as unkind as it was unsparing. The lawmakers had warned that “indefinite detention in defiance of court orders and/or unfairly conducting Sowore’s legal prosecution will only serve to tarnish Nigeria’s international reputation and its standing as a leading African democracy”.

It is remarkable that four days after the US Congress letter, Sowore and Dasuki have been released. Shall we need similar letter from the Russian parliament to release the likes of El Zazaky and other such political prisoners held across the country?

It is also remarkable that the US letter followed a whole week of what passes for some diplomatic offensives between the US and Nigeria. The US had placed Nigeria on the watchlist of countries that engage in “severe religious persecution” as it declared Nigeria as intolerant of different religious views.

It is also noted that America had sent a delegate to the court, last Monday to observe the court proceedings in the prosecution of Sowore.
Clearly, America had shown more than passing interest in the trial of Sowore, and has thus exerted some pressure on the Nigerian government , which culminated in the release of Sowore and Dasuki last Tuesday.

It is ironic that a government that prides itself as being an adherent of the rule of law will brazenly be in breach of court orders, out of sheer “strong headedness”. Were it not so, what really is the excuse for not releasing Dasuki and co all along? Or what other additional charge was filed against Sowore since he was re-arrested on December 5? Is it not sheer abuse of prosecutorial powers and display of dictatorial tendencies to defy court orders?

Malami in his statement claimed that he has reviewed the bail granted the duo and has decided to comply with the court orders, whilst also stressing that the federal government can yet exercise its right of appeal against the bails so granted.

Question is why did it take him forever to do this so-called review? What Malami failed to say is that he and his boss had been placed under intense and blistering pressure by the European Union and America to release Sowore and co; and it would be clear and damaging obduracy to keep ignoring the public/international outcry. The next step would have resulted in some diplomatic squeeze of Nigeria in the comity of nations

It is instructive that the prosecution of Dasuki and Sowore will not be terminated.
Dasuki former National Security Adviser (NSA) will now face the prosecution proper of the charges of money laundering and unlawful possession of fire arms.

In the same vein, Sowore, the convener of the #Revolution Now charged for treason, money laundering and cyber stalking, will now have to face his trial.

That the trial of the duo will be carried out with them being in freedom means so much and makes a lot of difference from coming to court from the detention facilities of the prosecutors.
Perhaps, the focus will now be on the clamour for the release of El zazaky, the leader of the Shi’ite movement in Nigeria.

The courts, like in Dasuki and Sowore’s cases, have given several orders for the release of El Zazaku. But the orders have been faithfully denied and ignored.
The government does not lose anything allowing the accused to face trial as a free person. The same belief applies to El Zazaky. He can be prosecuted from his home, except there are other clear (not foggy) adverse security implications.

No doubt, these cases of rights abuse and court disobedience tar the local and international image of Nigeria. And its leader cannot but be mindful of how it is perceived., especially for a nation openly coveting global support.

A report had claimed, for instance, that on account of the Sowore detention, the Nigerian Stock market had lost N229 billion in three weeks because insecurity, instability, court disobedience (a precursor to anarchy), all combine to scare away potential investors. Surely, Nigeria does not need such hoopla now or even in the future.

I should think the Buhari-led administration can yet redeem its image if and when the government indiscriminately sticks to the rule of law, as democracy prescribes. That is the way to go, if our democracy must be carefully watered and nurtured.