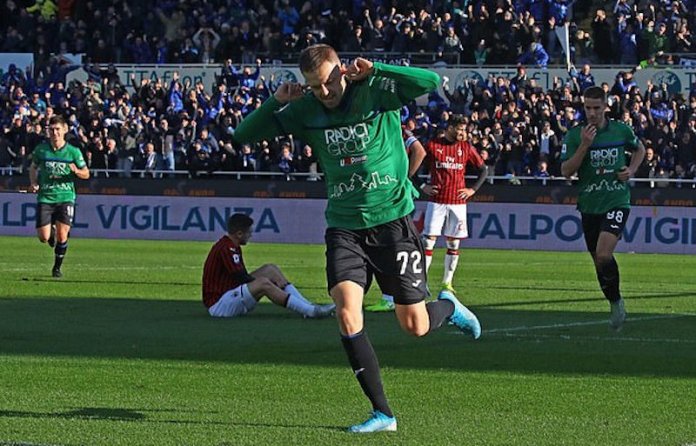 Former Milan player Mario Pasalic rubbed further salt into their wounds by also scoring. It was the fourth time Milan have lost a Serie A match by a five-goal margin and the first since 1998.

Milan are tenth in the table with 21 points while Atalanta climbed to fifth with 31 as they capped an outstanding year which saw them qualify for the Champions League for the first time and reach the last 16.

‘It’s been a fantastic year which has been crowned by today’s performance,’ said Atalanta coach Gian Piero Gasperini.

His opposite number Stefano Pioli said that Milan ‘approached the match in the wrong way and you just can’t afford to do that against this team. This cannot be the real Milan.’

‘Today’s performance was seriously insufficient,’ added Pioli, Milan’s second coach of the season after his predecessor Marco Giampaolo was fired after only seven games. ‘I expected a reaction from us in the second half but it didn’t come, in fact we were even worse.’

Gomez opened the scoring in the 10th minute, nutmegging a hapless Andrea Conti before firing a right-foot shot past Gianluigi Donnarumma in the tenth minute.

Pasalic, who clipped the crossbar before halftime, diverted Robin Gonsens’ cross-shot into the net in the 61st minute, although he refused to celebrate his goal, then Ilicic scored twice in an nine-minute spell to turn it into a humiliation for Milan as their defence fell apart.

First, the Slovenia forward collected a pass on the right, outfoxed his marker and drilled his shot past Donnarumma in the 63rd minute, then he curled a delightful effort into the top corner from outside the area.

Davide Calabria cleared a shot off the line but there was still more to come as Luis Muriel ran onto a through ball, outran a Milan defender, evaded Donnarumma as the goalkeeper rushed out of his area and added the fifth.

The referee spared Milan further punishment by mercifully adding on only one minute of stoppage time.