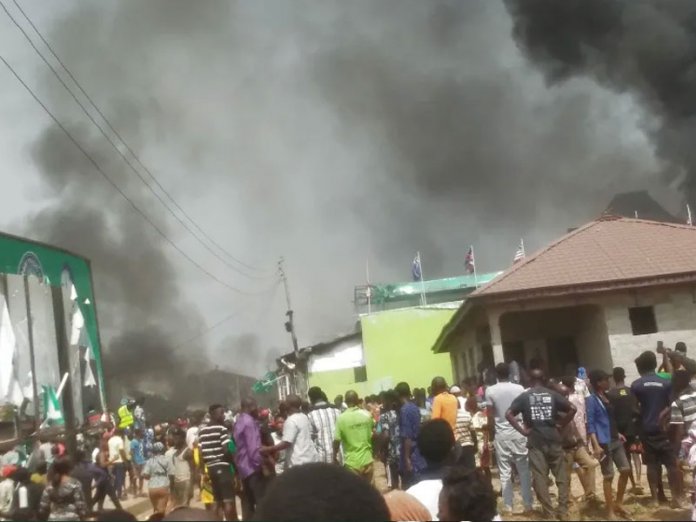 Some journalists were also attacked during the incident.

The mob stormed the church around 8.30 a.m. following a widespread rumour that the remains of a one – year -old boy, Gold Kolawole, who got missing since over a month ago, was exhumed from the church altar.

The rumour, which spread like wildfire, spontaneously made the people, mostly commercial motorcycle riders and other youths to attack the worship centre and set it ablaze.

It was gathered that worshipers in the church ran helter skelter as the attack occurred during a prayer session in the church.

The incident was also capitalised on by miscreants who went on looting spree of the church property, including musical instruments.

The fire also spread to other buildings around the worship centre, while some residents of Akure gathered in thousands to witness the incident.

Though the Commissioner of Police for Ondo State, Mr. Undie Adie said it was not the police that shot the victims, eye witnesses alleged that the civilians were shot by policemen.

It was also gathered that the irate mob descended on the policemen when they saw the wrist band of the church on the hand of one of the policemen.

The mob also set ablaze several vehicles parked around the church building, including a patrol van belonging to the Nigeria Police.

The Commissioner of Police said the mob only acted on rumour, saying that there was no digging of the church altar or exhuming anything from the dug area.

Before yesterday’s incident, people had been accusing the police of not doing enough to unearth the truth about the missing boy.

Sequel to a petition allegedly filed by the parents of the missing boy, officers of the Department of State Services (DSS) had about 12 days ago arrested the founder of the church, Prophet Alfa Babatunde Samuel and some church officials in charge of children’s services.

The church founder was still in the custody of the DSS even while the church was being attacked yesterday.

It was also gathered that mob also attacked the personal house of the prophet located on Oda Road in the outskirt of Akure.

Joseph said the command lost an officer, while another one was critically injured just one civilian died in the incident.

The PPRO, who said the command had arrested some suspects in connection with the incident, added that there was nothing like exhumation of any corpse or object from the church.

He appealed to the residents of the state to go about their normal duties and disregard the rumour.