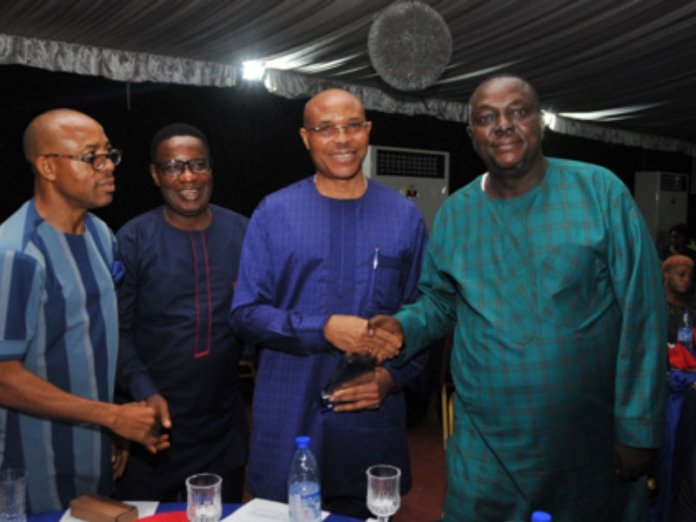 At a well-attended Fundraising and Awards Dinner in Lagos recently, the Chairman, AAUAA, Lagos Chapter, Mr. Chris Iyere decried the preventable deaths and loss of lives in the university community as a result of the poor state of the health centre on the university campus.

He said: “It is appalling that students are still dying due to common malaria as there is no modern diagnostic equipment for proper testing, the building is in shambles, and no beddings in the wards. It calls for serious introspection and action.”

He therefore urged the alumni of the university to donate generously to the fund.

In his goodwill message at the occasion, the Pro-Chancellor and Chairman, Governing Council of Ambrose Alli University, Chief Lawson Omokhodion, commended the Lagos chapter of AAUAA for its decision to give back to the university that made them what they are today by raising funds for the upgrading of the university’s health centre, building of an e-learning centre and other projects in the university.

Omokhodion, who was represented by Mr. Osezua Abhulimen, an alumnus of AAU, said the new governing council inaugurated in October 2018 has been tackling the problems of dearth of infrastructure in the university, wrong deployment of academic faculty, deficient international linkages, inadequate funding of the university, among other challenges.

He commended the visitor to the university and the Governor of Edo State, Mr. Godwin Obaseki for the support he has given to the council to turn around the fortunes of the school.

Omokhodion listed some of the progress made by the university under the present governing council to include the commissioning of four massive buildings funded by TETFUND in November this year at the cost of N4 billion.

In addition, he said that the President of Dangote Group, Alhaji Aliko Dangote has pledged to build two 500-room hostel for male and female students during the last convocation of the university to help solve the problem of accommodation.

The chairman of the governing council commended some alumni of the university such as Pastor Chris Oyakhilome, the Founder of Christ Embassy Church and Mr. Tony Elumelu, Chairman of UBA for their contributions to the growth of the university.

Notable alumni were given awards for distinguished career and humanitarian activities. They include Mr. Slyva Ogwemoh, the first graduate of the university to be conferred with the rank of Senior Advocate of Nigeria (SAN), Mr. Frank Egboh, a legal practitioner and immediate past Chairman of the Lagos Chapter of AAU alumni association, Dr. Clifford Omozekhian, Company Secretary/ Legal Adviser, Federal Airport Authority of Nigeria, among others.