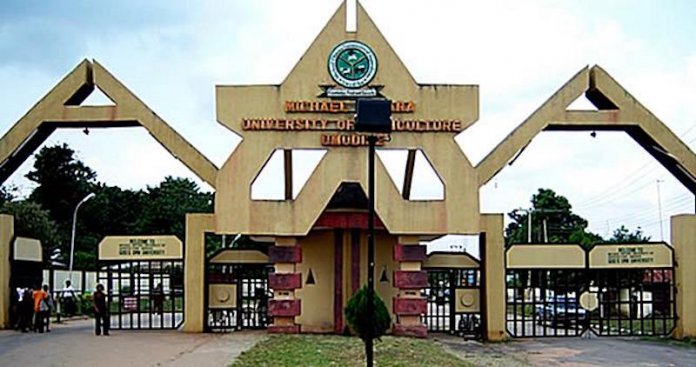 It was a joyous occasion for graduands, parents and well wishers as Michael Okpara University of Agriculture Umudike (MOUAU), Abia State held its 9th convocation ceremony on November 30, 2019 where 7,028 students graduated with first and higher degrees.

The statistics of the graduands showed that 6,214 obtained bachelor’s degrees; 141 got postgraduate diploma, while 505 graduands were awarded master’s degree and 142 received doctorate degree after successfully completing their academic programmes.

Among the thousands that graduated with bachelor’s degrees 100 shone brightly as they came out with first class, a record number going by previous convocation ceremonies of MOUAU.

It was observed that the nineth convocation involved students that had graduated between 2014/2015 and 2017/2018 academic sessions with some that graduated from accounts department in the 2010/2011 session.

According to the Vice-Chancellor, Professor Francis Otunta, the graduands earned their degrees meritoriously “through a proper mix of course work and research.”
He said in the course of their academic programmes, the graduands were exposed to entrepreneurial orientation and innovative talents to function as wealth creators and social reformers.

“Michael Okpara University of Agriculture, Umudike is dedicated to the training of its students to become professionally competent and confident graduates with exquisite dexterity.”

Otunta, who assumed duties in March 2016, said he has continued to apply himself to the task of transforming the university, adding that a lot of changes have already taken place since he assumed office.

“This administration has since its inauguration, followed a trajectory which promotes academic excellence aimed at ensuring that the university remains amongst the top world class universities in the comity of universities.”

The VC noted that though the task is tough, his administration was determined “to excel through a quality control mechanism, due diligence processes and best practices that would erode the unapplaudable image of the university occasioned by poor educational policies that were on ground” before he assumed office.

He added: “Most of the hostels we met on ground were very poorly constructed (hence) huge funds that could have been used towards building new structures are rather channeled to the renovation and maintenance of the substandard structures.”

The VC said he is already righting the wrongs in the physical development of MOUAU, adding that “sooner or later this university would flourish with choice projects that would make reality becloud mediocrity.”

On the accreditation of programmes, Otunta announced that the 12 programmes presented by the institution in the accreditation exercise by the National Universities Commission (NUC) in October/November 2018 all got full accreditation. According to him the least score of 80 per cent was recorded for all the programmes, while Computer Science Education received the highest singular score of 98.1 per cent.

In his remarks, the Chancellor of the university, the Emir of Gombe, Alhaji Abubakar Shehu Abubakar III, expressed his concern over the long-standing issue of accessing MOUAU land.

He pointed out that the encroachment by host communities “is greatly inhibiting the implementation of the university’s master plan (thereby resulting to avoidable crowding of infrastructural facilities.”

The chancellor therefore appealed to the host communities and relevant government agencies “to assist in removing the obstacles to the development of the university.”