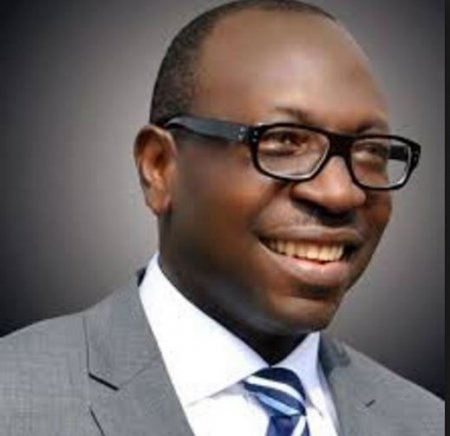 Majority of the people who thought Governor Godwin Obaseki of Edo State was weak and cowardly have been forced to have a rethink since the enduring standoff between him and predecessor and National Chairman of the All Progressives Congress (APC) began. What is becoming clearer by the day is that Obaseki is not a pushover who could be tossed around by a political godfather.

Not many knew that behind the disguise of one lacking in courage that encompasses his external personality, there is a studiously calculating disposition that Obseki has set up to pull the rug off the feet of Oshiomhole. The veil has been torn off the face of the big masquerade called Oshiomhole, who used to be seen as a demi-god. Recently, in Benin City, capital of Edo State where he used to hold sway, the former governor had to seek the help of security agents to move from the Benin Airport to his residence.

Oshiomhole was in town to participate in the activities welcoming the former governorship candidate of the Peoples Democratic Party (PDP) in the 2016 guber elections, Pastor Osagie Ize-Iyamu, into the APC in a widely-publicised Mega Rally. Oshiomhole needed that rally to prove that he still the levers of the party, at least, in Edo, his home state, firmly in his grip. It was a necessary show of dominance for him. Unfortunately, all the optimism were misplaced and the ended in a disgraceful outcome for the national chairman, who was forced to eat the humble pie.

Before this shocking twist, many in Edo elevated Comrade Oshiomhole from a mortal to divine rank in the politics of the state, owing to his influence in the state before he left office in 2016. However, since his running battle with Governor Obaseki – a technocrat, who pundits say abhors dirty politics came to the open, Oshiomhole has been exposed as the brawler, while Obaseki retains the visage of a gentleman. The battle took different dimensions since the primaries for the general elections and the inauguration of the State House of Assembly. While Obaseki relies on the instrumentality of the courts and brainpower, Oshiomhole and a gang popularly known as the Edo Peoples Movement (EPM) have relied on brawns and influence peddling, which culminated in the factionalisation of the party in the state.

The political tension in Edo State got to a head on Friday, December 13, when Pastor Osagie Ize-Iyamu attempted to defect to the APC in a failed mega rally which turned out to be nothing more than a family meet-up. The venue for the defection had to be changed due to a police directive instructing that the rally should not hold, even as the state government banned political rallies in private residences and schools across the state. Obaseki’s opponents did not see this coming. None of them, not the least, the APC National Chairman thought the governor had the courage to upstage him.

A lot of political watchers in the state have come up with different permutations as to what would have led to Pastor Ize-Iyamu joining the APC after so many years of acrimony between him and Oshiomhole, to whom many years before Ize-Iyamu had served as a Director General for his governorship campaign but fell out with him shortly after Oshiomhole came into office.

The loudest of arguments the debates is the fact that Oshiomhole had shopped for candidates to replace Oshiomhole within his team but could not find anyone with enough political capital and network to match the force and popularity of Governor Obaseki.

Why would Oshiomhole be shopping for someone to replace Obaseki, if he indeed means well for the development of the state? Given Obaseki’s sterling performance rating, shouldn’t the matter be about mending fences and working to consolidate on the gains of the Obaseki administration? Why would Ize-Iyamu want to force his way into the APC, when the body language from the camp of the governor, who is leader of the party in the state, was for him to hold on and follow the schedule of activities the state chapter of the APC had outlined for such occasions?

What is not in doubt, however, is that Ize-Iyamu has comfortably pitched his tent with Oshiomhole’s duplicitous faction in the state, and instead of strengthening the party, as he claimed he intends to do, Ize-Iyamu is attempting to deepen the division in the party, which many believe is the game plan of Comrade Oshiomhole.

Interestingly, the pillaging and violence and the show of shame that played out in the private residence of the ‘Pastor’ happened in a week when the Redeemed Christian Church of God (RCCG), where he claims to be shepherding a major branch was hosting its Holy Ghost Congress, a key event in the church’s calendar. Is Ize-Iyamu really worthy of the appellation of a pastor when he places divisive politics and a political fiesta far above the programmes of the church where he is a high-ranking member?

The botched Mega Rally turned out a big flop not just because the former governor had a false sense of his influence in the state, but also because of he has blossomed fully into a hypocrite with his stance as a godfather, years after fighting the same phenomenon. This is the same Oshiomhole who fought the overbearing tendencies of the late ‘Leader’ Chief Tony Anenih, insisting there was no place in the politics of Edo State for a godfather. Sadly, he is attempting to reenact that role in the administration of Obaseki. The flop of the Mega Rally further exposes Oshiomhole’s weakening political base. Youths, who ordinarily would have rallied round him, had staged protests across major roads in Benin metropolis on Thursday, warning that desperate politicians were importing thugs from outside the state to cause mayhem.

The Inspector-General of Police (IGP), Mohammed Adamu, on Thursday night, ordered that the event be cancelled over ‘overriding internal security interests,’ directing the Commissioner of Police in the state to meet with the opposing political interests.

Originally billed to hold at Garrick Memorial School, Ekenwan Road, it was later reduced to what can be termed a family meeting at the private residence of the decampee, Pastor Osagie Ize-Iyamu.

The Inspector General Police (IGP), in a letter addressed to the Edo State Deputy Governor, Rt. Hon. Philip Shaibu, signed by his Principal Staff Officer, ACP Idowu Owohunwa, said “in cognizance of the security consequences of the proposed Mega Rally, I am to confirm that the Inspector General of Police has directed the Commissioner of Police, Edo State Command to emplace appropriate security framework that is directed at suspending the rally until further notice.

“He has also been directed to summon a meeting of all parties involved in the political development with a view to engaging them towards giving effect to his directives in overriding internal security interests.”

This was after the state government issued a strongly-worded directive against holding of political rallies and demonstrations across the state, following rising security tension in the state.

The police acted proactively by manning strategic points across the state to give effect to the state government’s directive, which led to the dispersion of crowds that gathered at the Ugbor-Amagba axis of the state.

On its part, the government warned all property owners that any venue used for activities in breach of its orders shall have its right of occupancy immediately revoked and forfeited to the Edo State Government, noting that it will not allow any person to turn the state into a battlefield.

According to a statement by the Secretary to the State Government, Osarodion Ogie Esq., “The Government of Edo State has, over the past few days, made clear its position that the plans by some identified mischief-makers to organise an unauthorised political rally in Benin City, was capable of leading to a breakdown of public peace and also a danger to the persons and property of Edo citizens.

“The events of yesterday, 12th December, 2019, were a scary prelude to the absolute mayhem which these irresponsible activities would generate if left unchecked.

“In defiance of the clear and publicised instruction of the Inspector General of Police (IGP), calling off the proposed rally owing to the security implications, these desperate persons are presently shopping around for alternative venues to carry out their incendiary activities.”

There were too many factors going against the rally. There was no way it could have successfully held, given not only the charged political atmosphere but also the lack of support from those who had once called Oshiomhole their political leader.

As Pastor Ize-Iyamu’s entry into the APC is already generating a lot of complications and bad blood, the Man of God may have been unwittingly dragged into an ignoble path. All the indicators point to a faulty start, signaling ominous future occurrence.