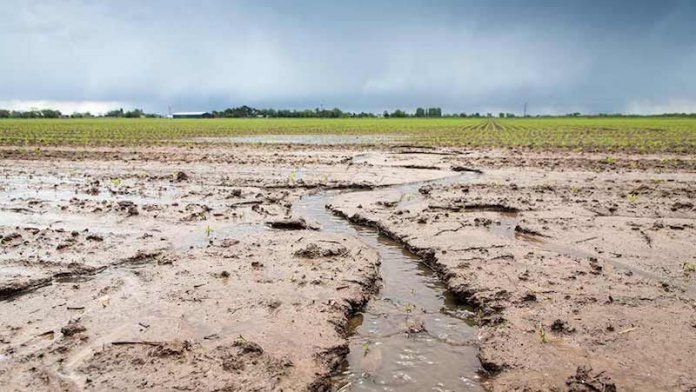 Soil scientists in the country have said soil erosion poses a greatest threat to food security, poverty eradication and environments health in the country.

The National President, Soil Science Society of Nigeria(SSSN) Prof. Bashr Raji disclosed this in Ilorin, Kwara State, while speaking with journalists on the sidelines of the just concluded World Soil Day.

He said, “Soil erosion and desertification are two well-known causative factors of land degradation in the country,” adding that, “there is no community in Nigeria that are spared of one form of soil erosion or the other.”

“The most significant case of coastal erosion and flooding is the overflow of the Bar Beach of the Atlantic Ocean now a regular feature since 1990, threatening the prime property areas of the Ahmadu Bello Way, Victoria Island, Lagos (Federal Ministry of Environment).”

He added that, “Soil erosion, though a natural phenomenon, is accelerated through anthropogenic causes like overstocking or overgrazing, removal of vegetation cover due to farming activities or deforestation due to logging and construction activities.
“Others are urbanisation, road construction, quarrying activities and population increase leading to high intensity of human pressure on land.

“However, it is important to note that soil erosion affects food security by general decrease in soil fertility (as a result of the action of sheet and/or wind erosion), and diminution of cultivable land as a result of the occurrence and expansion of gullies.

“Soil erosion also reduces the capacity of the soil in its provisioning services of fibre, raw materials, and support for infrastructure.

“Its regulatory and cultural services such as flood mitigation, filtering of nutrients and contaminants, groundwater quality, carbon and other greenhouse gases sequestration to mitigate climate change, recreation, aesthetics”.

Raji, who commended the federal government for gains in the agricultural sector in recent years, said, “for these gains to be sustained and for the attainment of about 7 SDGs out of the 17 in which soils directly or indirectly affect, the success of SDGs, the Soil Science Society of Nigeria urges the federal government to keep faith with the action plans under the Land Degradation Neutrality Target Setting Programme (LDN TSP) which stipulated that over N194 billion is required to restore degraded lands by 2030 to the pre 2015 scenario.

“The government should also consider establishing a Soil Remediation Fund to which at least 30 per cent of the Ecological Funds should be allocated.