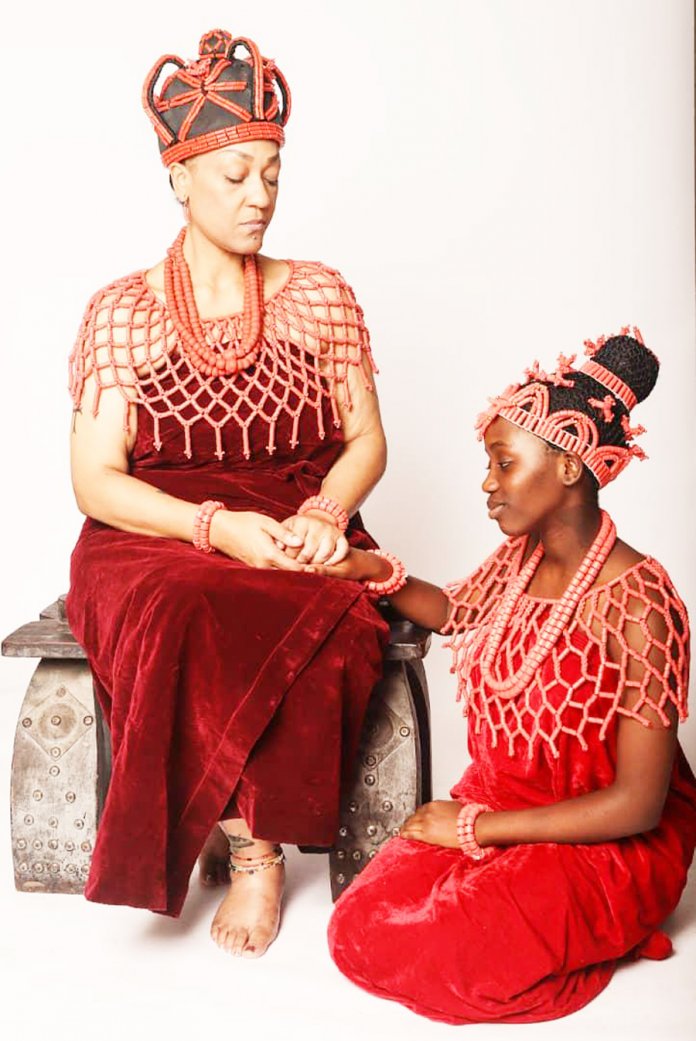 For years, thespian, Elvina Ibru, has been a constant feature in plays. The charismatic “Baby” mesmerises on stage, assuming different characters. However, the choice of Elvina, this time for a historic play, Emotan, a Joseph Edgar production, is in a way befittingly contrasting, albeit intentional, for the role, writes Ferdinand Ekechukwu

Quintessential Elvina Ibru is multifaceted in showbiz. Thus a delight to watch. Her enduring personality has been so enchanting and appealing, be it on a song, stage or screen. The acclaimed stage actor truly knows and worth her craft. In singing, acting, directing, producing and so on, she has proved her worth and has never stopped. As a household name in the entertainment industry, the Delta State born star is one of those who have contributed in making the industry what it is today.

“Although I can say that I am not a veteran in the movies because I just spiced up my acting recently, but I have been on stage for a long time,” remarks Elvina.

Even at that modest and humble admission of not being a veteran, her lauded role in the Bolanle Austen-Peters recent film, ‘Bling Lagosians’ as Mopelola Holloway, the matriarch of the famous Holloway family in Lagos, which she did interpret with a proven precision, fetched her accolades from fans and even colleagues. Notably, it is the first time the actress is cast in a lead role in a feature film!

Elvina has been a constant feature in plays, like the widely known ‘Vagina Monologues’, now ‘Hear Word’, since its debut in 2006. One remembers seeing her do her thing on stage during a literature prize ceremony in Lagos. The charismatic Elvina mesmerises on stage, assuming different characters as the wife of a man who offers his wife and daughter to visitors for sex, to playing a young woman brainwashed by a pastor into sleeping with him for the fruit of the womb.

However, the choice of Elvina’s character this time for a historic play, Emotan, is in a way befittingly contrasting, albeit intentional, for the role. The Elvina persona personifies greatness. A piece revealed that Elvina, like most good actors, is always very particular about the quality of the script. She only accepts well-scripted production irrespective of the part.

“In theatre school, they always say that there is no such thing as a small part, only a small actor. It is very deep. A small actor is typically an actor who turns down a script because he or she is not given a major role, unknown to him that the small part may catapult him to stardom.

I had a similar experience. I once delivered a line in a play that got a director so restless that he sought me out and offered to give me more lines. If you see as I handle that line,” she was quoted to have said comically.

Historically, the Emotan drama is the story of a revered Benin trader, credited with setting up the first kindergarten in the kingdom and saving the monarchy during one of its adversities. As a young woman, she married Chief Azama of Ihogbe district, and became his second wife. The woman Uwaraye, known as Emotan, was considered indolent by her husband because she could not cook. She could not get pregnant either. Azama´s first wife, Arabe, handled the domestic chores and gave birth to all the children of the household.

Azama, soon nicknamed Uwaraye, Emitan, corrupted to Emotan, meaning lazy bones. She had a redeeming feature, though. She was good at helping to nurse and take care of the brood of the household.

When her husband died, she had to move out of the house to save herself from being made a laughing stock for having no issue. She however could not also return to her parents’ home because they too had died of old age earlier on. She sets up a hut to live in at her trading post opposite the market place. Her hut soon became a popular make-shift nursery for the children of families patronising the market.

She was a strong woman who traded in foodstuff around the 15th century at the Oba Market during the reign of Oba Uwaifiokun and Prince Ogun, who later took the name ‘Oba Ewuare the Great’ when he became king. The pioneer of the first day-care centre in Benin City, she assisted Oba Ewuare in reclaiming the throne as Oba of Benin after several years in exile.

Written and directed by William Benson, the play which is produced by Joseph Edgar, the egghead behind Duke of Shomolu Productions will run from December 22 through to December 25, 2019 at the Agip Recital Hall, Muson Centre Lagos.

This is coming after the successful showing of the play at the just concluded National Festival for Arts and Culture which held in Benin, Edo State. The wave-making investment banker turned theatre practitioner Joseph Edgar has in recent past successfully delivered on four top-notch theatre projects, staged in different parts of the country within a space of 10years.

Already the highly anticipated stage production has pulled heavyweight corporate sponsorships to it. With a cast and crew made up of the veteran broadcaster, Soni Irabor, and entertainment personality, Olisa Adibua, Emotan is believed will surely give the audience a deep, provocative and emotional ride into the past.