The re-arrest of convener, #RevolutionNow protest, Omoyele Sowore by operatives of the Department of State Service (DSS) yesterday morning in Abuja has continued to receive heavy condemnation from concerned Nigerians, who felt pained by what they described as an assault on the Constitution, the judiciary, the rule of law and desecration of the hallowed temple of justice.

Sowore and his co-detainee, Olawale Bakare were re-arrested barely few hours after their release from the DSS custody where they have been in the last four months.

Justice Ijeoma Ojukwu had in the sitting of Thursday December 5, frowned on the continued detention of the defendants despite their release on bail.  Consequently, she ordered the DSS to release Sowore and Bakare within 24 hours and to report to the court the following day to confirm that her orders had been complied with.

The DSS, having complied with the order of the court and released the defendants to their lawyers on Thursday, however made a u-turn yesterday morning and seized Sowore and Bakare right inside the courtroom where other proceedings were taking place.

Speaking to journalists shortly after the arrest, the defendants’ lawyer, Femi Falana, SAN declared: “I can assure you, what is going on will not go away unchallenged. We either run this country on the platform of the rule of law or we resort to gangsterism, which is what is going on.”

Falana recalled how Nigerians fought against military dictatorship, including General Muhammadu Buhari, and defeated all of them in the past.

“Under a democratically elected government, we are not going to allow anybody, no matter how highly placed, to put down the rule of law or to treat the rule of law with disdain.

“Having complied with the order of court, what is therefore required is for the State Security Service to allow our client to enjoy their limited freedom because both of them have been restricted to Abuja and Osogbo, respectively. So there is no basis for this fascists approach,” Falana said.

The human rights lawyer said the operatives, who stormed the court, threatened to shoot during a court proceeding, forcing the court to rise prematurely.

He said such an aberration had never taken place in Nigeria’s history even under a full blown military rule and vowed to challenge the violation of the court.

He said: “Even under full military dictatorship, you will be allowed to drive out of the court premises and then be arrested on the street but not in the web of the court, it has never happened before.

Atiku: Without Rule of Law, There Cannot Be Rule At All

Former vice president and the presidential candidate of the Peoples Democratic Party (PDP) in the last general elections, Atiku Abubakar has expressed anger at the drama displayed by the DSS in the arrest of Sowore.

Atiku said that what played out at the court with the rearrest of Sowore was not acceptable, describing it as a rape of the country’s democracy.

In a statement, he signed, the former vice president said that he was extremely anguished watching the drama in which agents of the DSS caused commotion in order to frustrate a judgement of court.

“Never in the history of Nigerian democracy has a judge been treated in such a disdainful and brazen attack on not just her person and office, but on the entire judiciary.

“This is unacceptable. It is a rape of the sanctity of the court. Nigeria is not a dictatorship. We are a democracy, no matter how inconvenient this fact is to the powers that have forced themselves on us,” Atiku said.

He called for an immediate inquiry to be set up to identify those responsible for the maltreatment meted out to Justice Ijeoma Ojukwu and the desecration of her court, and indeed the Nigerian judiciary.

The PDP, in its reaction, said the invasion of the sanctity of the Federal High Court by the DSS further confirmed that Nigeria, under the Buhari Presidency, was finally sliding into a frightening dictatorship.

The party in a statement by the National Publicity Secretary, Kola Ologbondiyan said the invasion was a vindication of its earlier stand that the nation was no longer governed by democratic principles of rule of law and dictates of the constitution.

“The invasion is a forceful suspension of our constitutional order and a further battering of the judiciary, which points to an emerging lawlessness that can only find space in a military regime,” the party said.

The PDP called on well-meaning Nigerians and the international community to call the Buhari Presidency to order before its actions derail the nation and trigger a breakdown of law and order in the land.

Also, a frontline Civil Rights Advocacy group, Human Rights Writers Association of Nigeria (HURIWA) condemned as atrocious and a well-coordinated plot to destroy democracy and constitutionalism, the re-arrest of Sowore and Bakare.

The Rights group challenged all Nigerians to wake up and do something before this democracy collapses “because what happened in court is a total breach of section 6 of the Constitution of the Federal Republic of Nigeria of 1999 (as amended).”

The Nobel Laureate said, “May I remind this government that disobedience calls to disobedience, and that disobedience of the orders of the constitutional repository of the moral authority of arbitration – the judiciary – can only lead eventually to a people’s disregard of the authority of other arms of civil society, a state of desperation that is known, recognised and accepted as – civil disobedience.

“It is so obvious – state disobedience leads eventually to civil disobedience, piecemeal or through a collective withdrawal of recognition of other structures of authority. That way leads to chaos but – who set it in motion? As is often the case, the state, unquestionably. Such a state bears full responsibility for the ensuing social condition known as anomie.”

The Coalition of United Political Parties, (CUPP), accused the Presidency of being responsible for the invasion of the court yesterday and subsequent re-arrest of Sowore.

CUPP hinged its claim on the fact that no decision was ever taken by the DSS without the approval of the Presidency.

In a statement issued by its spokesperson, Ikenga Ugochinyere, CUPP said DSS desecrated the “sanctity of the court” by invading Justice Ijeoma Ojukwu-led court while in session.

In the same vein, a former presidential candidate, Oby Ezekwesili has warned President Buhari that “it is in his interest that Sowore is not harmed while in the detention of the DSS.”

Via her verified Twitter handle, the former minister condemned the re-arrest of Sowore and asked Buhari to direct the DSS Director General, Yusuf Bichi, to obey the court order on his release.

Ezekwesili noted that Sowore’s rearrest in a courtroom was an aggression against the judicial arm of government by the executive.

She said: “I urge my fellow citizens who are reasonable enough to know that today’s episode amounts to full aggression against the Judiciary by the Executive arm of @MBuhari and portends an extremely dangerous development. We must all stand to defend our hard-won democracy.”

Akinlaja said: “It is one of the most ridiculous and disquieting things Nigeria has ever witnessed. The tragedy of the situation is aggravated by the fact that we are universally exposed to opprobrium and ridicule as a people by reason of this institutional indiscretion.”

Also, another senior lawyer, John Baiyeshea SAN noted that Nigeria even under the Military regimes never had it this bad.

“The Judiciary was never treated with so much contempt and ridicule as we are now witnessing.  For how long shall we tolerate this kind of act of wickedness? I don’t know. But those in government today should know that their time will be up one day. And they will be held accountable by God and man. It is so disturbing”, he said.

Another Abuja based lawyer, Steve Ekeh in his own contribution said that the invasion of a court in session by operatives of DSS to arrest Sowore and Bakare for whatever reason smacks of the worst form of impunity never witnessed in the history of this country.

“For the DSS to burst into a court room to rearrest a defendant in a charge they brought to court in the presence of a presiding Judge, is a clear testimony of the depth we have descended as a country in violating institutions which ought to serve as the last bastion of hope of the ordinary citizens.”

The operatives of the DSS, after what seemed to be a strong resistance for about an hour finally whisked Sowore and Bakare to their headquarters in Abuja.

Sowore was taken away at the gate of the headquarters of the Federal High Court at about 10.46am after he was brought to the court by his lawyer, Falana.

The DSS had swooped on Sowore and Bakare few yards from court 7, where Justice Ijeoma Ojukwu was presiding.

Their attempt was initially resisted by Sowore’s supporters and police officers attached to the court, who insisted that Sowore and Bakare cannot be arrested inside the court.

However, it took the intervention of the defendants’ lawyer, Falana, before he could be taken away.

Trouble started shortly after the defendants stepped out of the court after their trial was adjourned till February 11, 2020 by Justice Ojukwu.

However, Sowore who had appeared with his lawyer in court yesterday morning in line with the Court’s order for report of compliance, was chased back into the courtroom by operatives of the DSS who were waiting outside the court premises.

The stern looking operatives of the DSS had swooped on him, in a bid to forcefully take him away.

But Sowore despite being dragged, managed to get back into the court room with the operatives following behind thereby disrupting proceedings.

In their bid to take him away, lawyers and journalists were locked out of the court even as the security operatives threatened to seize and destroy phones and cameras belonging to journalists.

The development resulted in pandemonium within and outside the court premises until Sowore and Bakare were eventually taken away. 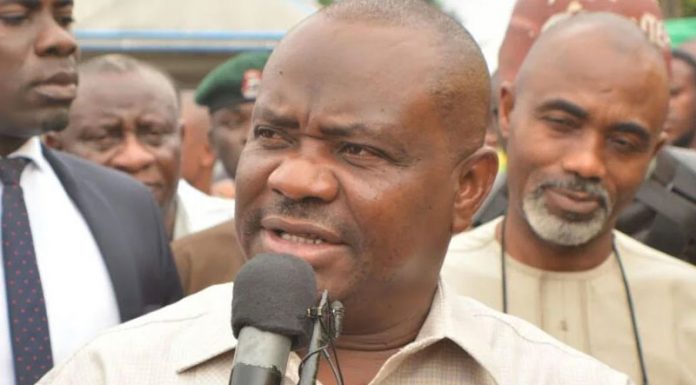 IMF Advises Nigeria to Slow Down on Tax Drive