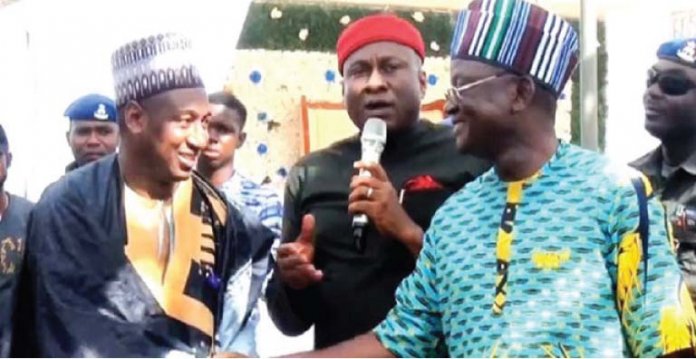 It is not surprising that the recently celebrated peace initiative in Benue State between the state government and Miyetti Allah has broken down. George Okoh reports

The enactment of anti-open grazing law in Benue State was two weeks ago, believed to have paid off, when Miyetti Allah Kautal Hore, an advocacy group promoting the welfare of Fulani pastoralists in the country, a forthnight ago apologised to Governor Samuel Ortom of the state over the various herdsmen attacks and killings in the state.

Aside from apologising for the killings, the group also promised the governor that its people would henceforth live in harmony with farmers in the state, saying it was an assurance they had already undertaken.

Governor Ortom, who seemed relieved by the development, further clarified that the law was put in place to serve the best interest of everyone by way of ending the senseless killings of innocent people as well as encourage the idea of ranching as the globalbest practice of animal husbandry.

The development, however, came on the heels of a peace initiative brokered by the Chairman of Air Peace Airline, Chief Allen Onyeama, who reckoned there should be amicable solutions to the incessant killings in the state and beyond.

National Secretary of Miyetti Allah Saleh Alhassan, who spoke with journalists in Makurdi, the state capital, during the peace meeting, expressed regrets of the herders’ group over the many killings in the state and pledged to ensure peaceful coexistence between herdsmen and farmers, moving forward.

But Alhassan has since denied apologising over the killings in Benue. According to a source close to him, he said he was misquoted.

“When it was time for the governor to talk, he (governor) asked me to talk first before he would talk, so I can only sympathise with the governor and the people and how can I apologise for what we did not do? We maintain our position that we are not responsible for the killings?

“I did not represent the organisation at the event; my people had called me and I explained the scenario to them. I cannot sell my organisation. My presence in Makurdi shows that we are not hidden and we do not have anything against the people,” he added.

As a result of this rebuttal, the National Leader of Fulani Nationality in Benue State, Alhaji Garus Gololo, described as worrisome for any Fulani group or groups to apologise to Ortom over the Fulani herdsmen/farmers’ crisis that resulted in wanton destruction of properties and killings.

Gololo, said in Makurdi, the Benue State capital, that there was no basis for any apology because no Fulani nationality group including the Miyetti Allah Kautal Hore and the Miyetti Allah Cattle Breeders Association of Nigeria as well as others, was a killer group, and could not have claimed responsibility for any killing.

With the denial, both parties appeared to have returned to the trenches, holding on to their views on the matter.

National President of the organisation, Abdullahi Bodejo, was quoted in some fora as saying, “Yes. We are just saying the same thing, whether Ruga or cattle colony, but the only thing is that Fulani issue in Nigeria is being used to play politics. If you are losing election and you want to gain back lost ground, play the Fulani politics. If you want to win election in 2023, you can start using anti-grazing law.

“We have grazing routes and grazing reserves and if Nigeria wants to solve the herdsmen and farmers clashes once and for all, you are a governor and you want to enjoy peace in your state, youdon’t need any long meeting, just create a particular area for the Fulani and equip them with modern amenities. Instead of doing this, they are playing bad politics with Fulani.

“Since when the Ruga started, I’m yet to see any, except the efforts being made by the Zamfara State governor. No other governor is doing anything about it; it is still politics.

“Look at the support given to rice farmers through anchor borrowers programme; it is running into several billions of naira, and yet there is nothing for the Fulani business.

“Some people are saying cattle rearing is a private business, but the about 99 per cent of the cows we are eating in this country are from Fulani. “States are making revenues from cows. For example, in Lagos, over 6,000 cows are killed daily and the state government is making so much money from that and that is the way it is in other states of the country.

“Even small children have been made to believe that the problem of this country is the Fulani. But Fulani are very peace loving;they don’t have any problem.”

But immediately, the Benue government fired back, calling on the security agencies to arrest and prosecute leaders of the herders group.

In a statement, the government said; “We read with shock, the statement in some dailies credited to the National President of Miyetti Allah Kautal Hore, Abdullahi Bodejo in which he threatened that governors who refuse to establish cattle colonies also known as Ruga settlements will not know peace in their states.

“The Miyetti Allah Kautal Hore’s outing has confirmed the fact that the group is not only responsible for attacks on farming communities in parts of the country but is also determined to reject any method of animal husbandry that does not agree with nomadic cattle breeding and are poised to sponsor violence in states not willing to donate land for open grazing.

“Utterances such as those of Bodejo are inciting and direct invitation for anarchy. No group should be above the law to be dictating to states on how to accord preference to it at the expense of other Nigerians.

“We call for the arrest and prosecution of the Miyetti Allah Kautal Hore President for persistently making statements capable of stirring crises in the country.”

It said Bodejo in the same media reports had singled out Governor Ortom for vilification, saying the governor has been playing politics with the Open Grazing Prohibition and Ranches Establishment Law to win sympathy and gain advantage.

The government said Benue would not take the threat by Miyetti Allah Kautal Hore lightly, adding that, “the law of the land is sacrosanct and must be obeyed by everyone. Any individual or group who wants to breed animals in the state should be prepared to ranch them.

“Nigerians irrespective of place of origin and ethnicity, who wish to do lawful business in Benue State are encouraged to do so as the Ortom administration is willing to collaborate with investors in different sectors of the economy. The Governor is equally committed to supporting security agencies to guarantee peace in all parts of the state.”

However, condemning the Miyyeti Allah president too, Nobel Laureate, Prof. Wole Soyinka, warned Bodejo, over his constant threat on governors over land.

Soyinka, who visited Ortom in Makurdi, said each governor had the protection of the Nigerian constitution to take his own decisions and enforce them accordingly in the best interest of the state.

0He described the grazing law, which a state like Benue has been implementing as the best that could promote modern method of animal husbandry.

“You see, each state must realise that it has to take its own decisions and enforce them as best as the state can. All I have to say to people, who make such kind of threats is that when they come to Ogun State, we will have a suitable response for them and I think all the states of the federation should take the same position,” he said.

Consequently, the Benue government has embraced the Federal Government National Livestock Implementation Plan (NLTP) with a caveat that everyone involved must adhere strictly to the Open Grazing Prohibition and Ranches Establishment Law, 2017.

Although many pundits alleged that the NLTP was another form of RUGA or Colony earlier presented by the federal government, the programme has been finally launched in Makurdi. And with this move by the Benue government, herders might shift position and embrace peace.