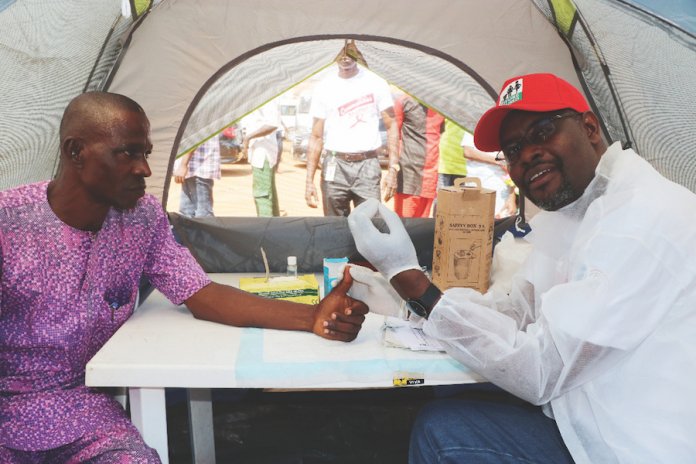 As Nigeria, today, joins the rest of the world to commemorate the 2019 World AIDS Day, Martins Ifijeh takes a look at the fight against HIV/AIDS in the country, the progress made so far, and the challenges ahead

When the world first marked World AIDS Day on December 1, 1988, it was a commemoration laced with fear, ignorance and confusion. Each country shared tales of gory photos of loved ones having their muscles ripped out of them by the AIDS virus. The society could not come to terms with having a virus that defiled answers. Families abandoned those who were infected. Hospitals rejected them. Many were termed outcasts and allowed to go through the palliative care alone. These were scary times for the human race.

Those infected who were alive to witness the first commemoration knew they were most likely not going to see the next one. All they prayed for was a painless death, as no solution was yet in sight. Scientists could not make lemonades from the lemons the virus had served them. All they had was hope.

Fast forward 31 years after, the narratives are changing. “Even though no cure is available for now, those who are living with the virus can now lead normal lives if they, on a daily basis, take their Anti Retro-Viral Drugs (ARV),” said the Director General, National Agency for the Control of AIDS (NACA), Dr. Aliyu Gambo.

But despite this progress, fear still persists globally. Since the beginning of the epidemic, more than 74 million people have acquired the infection, and about 35 million people have died. 37.9 million people across the globe are currently living with the virus, and sadly, only about 24 million of them are on ARV; giving room for the remaining 14 million persons to potentially have the capacity to infect other people, if data from the Joint United Nations Programme on HIV/AIDS (UNAIDS) are to go by.

In an exclusive interview with THISDAY yesterday, Dr. Gambo said persons living with HIV who are judiciously taking their ARVs have their viral loads reduced or even at zero, and cannot infect anyone, while those who are either unaware of their status, or not on ARVs, have a high potential of infect others.

Prior to March this year, Nigeria was known as the second capital of HIV/AIDS prevalence globally with a 2014 data showing 3.2 million Nigerians were living with the virus, just behind South Africa which has 7.1 million persons living with the burden.

But the National HIV/AIDS Indicator and Impact Survey (NAIIS) Result launched in March this year by President Muhammadu Buhari in Abuja has shown that the burden of the disease has reduced by almost half, bringing the prevalence to 1.9 million persons; a move that has now placed the country at number four in the list of countries with highest burden of HIV/AIDS in the world.

South Africa currently has the highest burden, followed by India and then Mozambique.

President Buhari, had at the launch, said the survey would provide the data required to plan adequately and consolidate on the past and current gains against the HIV/AIDS epidemic in the country. He said: “This is the largest population-based HIV/AIDS survey of its kind ever conducted and it has provided us with the crucial information to move forward and to act based on scientific data.

“More accurate figures show that fewer Nigerians have HIV/AIDS but we cannot celebrate yet because over one million of those infected are not on treatment.”

The survey, which had a large sample size of 225,000 persons drawn from more than 97,000 households across all the local government areas of Nigeria, has been dubbed the biggest HIV survey ever done by any country anywhere in the world. Dr. Gambo said: “We didn’t know since the last 15 years that we were doing well in fighting the scourge until last year when we did the NAIIS. This revealed that the programmes we have in place are working such that it has reduced the prevalence from 4.4 per cent in 2005 to 1.4 per cent in 2018. This has reduced the estimated number of people we thought had HIV in Nigeria from 3.5 million in 2005 to 1.9 million in 2018.”

Nigerian Women are Twice as Infected than Men

Analysis from the survey showed that women aged 15–49 years are more than twice as likely to be living with HIV/AIDS as men (1.9 per cent versus 0.9 per cent). It also showed that the difference in HIV prevalence between women and men is greatest among younger adults, with young women aged 20–24 years more than three times as likely to be living with the virus as young men in the same age group.

Also, among children aged 0–14 years, HIV prevalence according to the new data is 0.2 per cent. Efforts have been made in recent years to stop new HIV infections among children.

South-South has Highest Burden of the Disease

The NAIIS result has shown that HIV/AIDS prevalence in the six geopolitical zones of the country is highest in the South-south region of the country at 3.1 per cent among adults aged 15 to 49 years, with Akwa Ibom leading the pack with a percentage of 5.5, while the lowest among the region are Bayelsa, Delta and Edo.

The second highest region is North-central (2.0 per cent) with Benue State having the highest in the region with the lowest being Niger State. The result shows South-east zone is third among the six geopolitical zones of the country with 1.9 percent. South-west clinched fourth with 1.1 per cent, North-east zone set at fifth with 1.1per cent, while North-west zone has the lowest with 0.6 per cent.

The survey results showed that almost half of the persons living with the disease in Nigeria achieved viral suppression. Experts however say for a country to achieve end to the scourge, 90 per cent of those living with the virus should be on antiretroviral drugs.

According to NACA DG, of the 1.9 million Nigerians currently living with HIV, about one million of them were presently on ARV, while about 900, 000 were either not aware they are HIV positive, or have refused to access treatment which is free in the country.

He said: “We are pushing hard to see that those not yet on ARVs are identified and placed on the treatment. We are also pushing against the stigma and discrimination associated with it, because this has prevented some persons to actually come up for testing and then treatment.

“The NAIIS data has helped us in planning. The epidemic is shrinking, and what we need to do is to make sure it continues to shrink until it is no more.”

He said while the country still receives about 80 per cent of its funding from donor agencies, the federal government has increased funding for HIV/AIDS intervention.

“The allocation for HIV for 2020 budget has never been this good. It is now very encouraging.  The president graciously approved increment in the amount of money NACA receives. In 2020, NACA will now put additional 50,000 Nigerians living with HIV on the bill of the government. By next year, Nigeria will be treating 100,000 persons instead of the current 50, 000.”