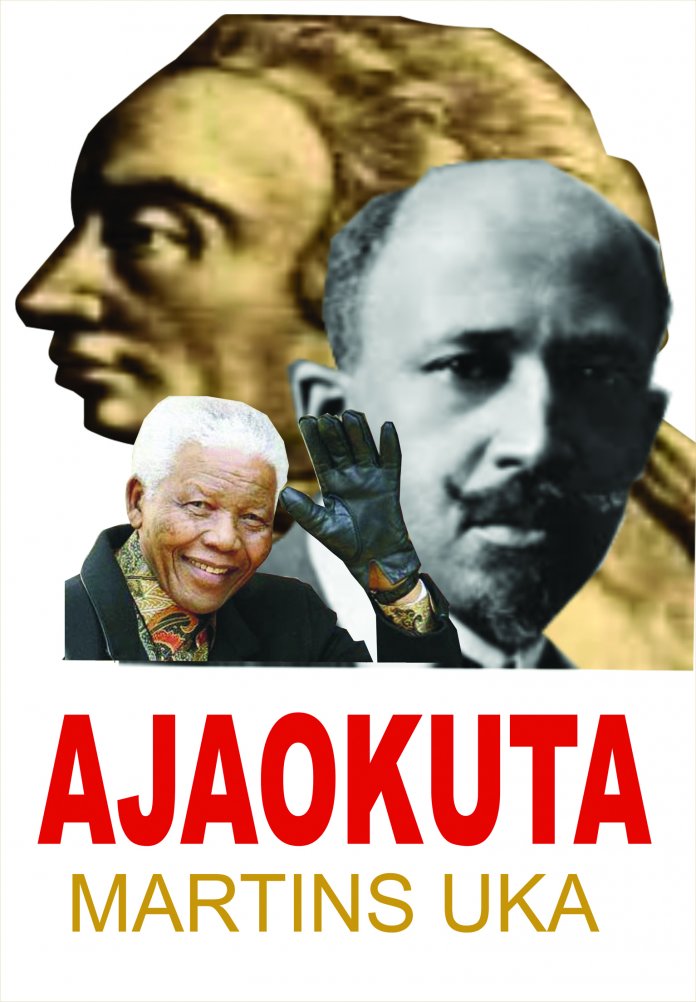 June 1993, at the MM Int’l airport, a shoot-out occurred. Variously, the media reported that an armed gang in a red Jeep mowed down American business persons for a trunk-load of dollars! As X-Warrior, an ex-NIA Director of Counterintelligence, undergoes a thought-provoking escape from the KGB, the MI6 and the CIA, it becomes a thought-provoking Caucasian twist of Ajaokuta Steel Mill. However, a sprinkling of incidents seemed unrelated: a kidnap attempt by the KGB at Tokyo; a Chinese test pilot landed in Japan seeking asylum; a KGB agent from Soviet Ukraine defecting to France; and, an ex-Vatican priest engaged in the shoot-out!

‘Ajaokuta’ links both the airport shoot-out and the ‘sprinkling of incidents’ to the politics of Ajaokuta Steel Mill alongside “the 16th Century, about 400 years ago,” when “London was a ghetto and ‘white’ families were so impoverished that ‘white’ mothers had to feed their ‘white’ babies alcohol so that they could sleep off the whole day and not ask for food.”

In Nigeria, government white paper stated that armed robbers attacked a Bureau De Change at the Murtala Mohammed International Airport sometime in 1993 and killed some ‘white’ people. ‘Ajaokuta’ tells us differently. That, the Nigerian government delivered its own damage control through the tabloids: “The Guardian, Wednesday, July 28, 1993, page 4”, presented it under the title ‘Robbers Attack Bureau De Change at Airport’. It is this refreshing angle spun by ‘Ajaokuta’ that keeps the reader on edge, bringing us in close contact with spies and counterspies, double agents, field agents, Virtual Battlefields, satellite intelligence, and detailing the severance of air flights between Nigeria and the United States of America beyond the turn of the millennium.

Effiong Akpan, a young NIA field agent, is hit by an NTA news flash on the Indians and Russians taking over Ajaokuta Steel Mill. A cascade is set in motion, as Effiong goes back memory lane, flashbacks, narratives, suspense, and all the first rate works of literary attributes and characteristics to let us drink from an engaging fountain of the world’s best spy story to date. We glimpse captivating revelations on the Niger-Delta Human Rights Abuses et al, including the parasitic presence of Shell Petroleum Company on the seven hundred and four square kilometer Ogoni homeland. Also, Judge Chagla’s dissenting opinion on the “Right of Passage Over Indian Territory” is instructive. Opinions and options are left to the reader if Nigeria should have handled the Bakassi Peninsula issue in the way she did and the attendant discomfort associated with the evacuation of her compatriots in the Bakassi Peninsula.

We savor refreshing tit-bits on the events leading up to General Murtala Mohammed’s death, former Nigerian military head of State, from classified intelligence files, revealing a first miss by a South African female assassin known as ‘Predator T’. Yet, another failed attempt on the life of Pope John Paul II during his visit to Nigeria.

There is refreshing insight into the behind the scenes events leading up to the signing of the Ajaokuta Steel Mill project between the Nigerian government and the Soviets. This is reflected in the shocking deliberations held about twelve hours’ interval, before the actual signing, at the White House, Washington D.C; The Kremlin, Moscow; 10 Downing Street, London; and of course apartheid Pretoria, South Africa.

Interestingly, a Russian Director of a secret research center in Moscow, collaborating with an ex-Director of Counterintelligence—specifically of the National Intelligence Agency, NIA, of Nigeria—reassures the reader that hope would always exist for humanity.

Who is a Villain? Professor Ben Nwabueze, Professor Alexei Kosygin, Boris Ugarov, Philby, Burgess, Maclean, Blunt, Long and Caincross, or the ‘authorities’ who branded them so? Again, ‘Ajaokuta’ comes up with some refreshing answer and explanation, citing even the famed Cox Report. That, the so branded Villains are rather true heroines and heroes spearheading ‘global grassroots’—a phenomenon seeking to put a stop to segregation in the affairs of nations and humanity.

Erica Jong, stated that “women are the only exploited group in history to have been idealized into powerlessness.” This could be true of Africa if Africans fail to act now. Certainly, this calls for deep and sober reflection. Why? So that Africans do not fall to ‘Third Slavery’.

Consequently, when all the pros and cons are taken, shaken, and assimilated, ‘Ajaokuta’ is a great read. It is not a work calling for Africa’s segregation as it were against the ‘white’ people, but a work identifying the few criminal elements in the ‘white’ fold who taint the image of their compatriots and a call for the global village to rise up as one in the spirit of true humanity to redeem itself. Confidently, I state that it is a work of art that would stand the test of time, being as constant as the Northern Star, and cheering up humankind.

I sincerely call on all the intellectuals, the anthropologists, economists, psychologists, philosophers, researchers, and what have you, all lovers of humankind, to rise up to the challenge to analyze this branded work of fiction, and put forward their write-ups for further exchange of ideas that would nourish humankind.