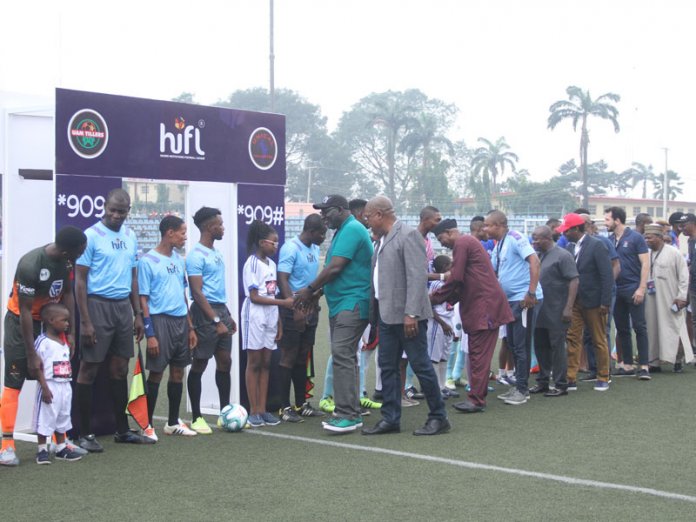 On Saturday, October 26th, football fever, the likes that have not been seen, since the jaunts of the Eagles at the last AFCON, gripped the residents of the Agege Township stadium and its environ. It was not another national league game. No, it was the final of the biggest collegiate sports league in the land, the Higher Institutions Football League, now in its second year.

Although, a reenactment of the 2018 finals between rivals UAM Tillers and UNICAL Malabites, the 2019 finals had a distinctly different flavour of its own brimming in vengeance and a quest to prove that previous glory wasn’t a fluke. The atmosphere was nothing short of amazing, even though no local team made it into the finals. It was an evening filled with plenty of action, some twists and turns, great crowd, awesome branding and intense action, anyone driving down the stadium axis, that evening, would have noticed an endless collection of parked cars crammed up along the outside streets.

Local residents of Agege, had a special reason to throng the stadium, their very own firstborn and music star, Small Doctor, led the performance for the opening ceremony and thrilled fans to some of his biggest hits. But that was not the only spectacle of the evening, the UNICAL Malabites had brought with them, an enviable supporters club, reminiscent of the colourful Calabar Carnival, beautifully adorned dancers, who swayed symmetrically to the rhythms from drums and other musical instruments, cheering the team, while filling the stadium with positive enthusiasm, color and glamour.

Before long the games kicked off, it was a pure footballing affair. Both sides ignited their rivalry at the blast of the whistle and immediately went at each other without inhibition, watching from the regular stands, where I sat, the game would pass as one of the most exciting encounters of the season. the referee and other match officials did their best to ensure the game flowed seamlessly. In the end, it was sweet revenge for UNICAL Malabites as they came from behind to beat defending champions UAM Tillers 5:4 on penalties in the most exciting encounter of the 2019 Higher Institutions Football League Season.

Apart from the historic win for UNICAL Malabites, the large turnout of fans and football lovers to the stadium, the admirable spectacle of the UNICAL Malabites’ fans that aptly reflected the cultural heritage of the African people alongside the calmness and serenity that ran through the entire game time, one of the most remarkable sights and connection point at the finals was the STANBIC IBTC *909# banner, which welcomed everyone into the stadium.

Many of the fans who watched the super 4 finals in Lagos got instant passes, after opening a Stanbic IBTC wallet with *909#. It was interesting to see the brand make true its promise, even as fans got awesome opportunities to win prizes through a raffle draw.

Before the HiFL 2019 Finals in Lagos, Stanbic IBTC, had launched the *909# platform as a product offering. providing a unique range of services to the informally served, the underbanked and the unbanked on various structured platforms with the last 10 digits of a phone number.

During the match, fans experienced a hands on assessment of how the platform works especially as it concerns access to banking services such as interbank transfers, debit card issuance and card less withdrawals from Automated Teller Machines (ATMs) or the Agent Network, amongst others.

While the Stanbic IBTC @ease wallet, platform comes through as a veritable financial freedom vehicle for all Nigerians to access seamless financial services. The initiative all the more reinforces Stanbic IBTC Bank’s drive to support the federal government to deepen financial inclusion and drive economic growth.

As cheerleaders of the bank took the center stage during the half time, to light up the atmosphere, with promising brand messaging, fans around the stadium could experience that the event was much more than just football.

In the end it is an occasion to celebrate the power football has in bringing everybody together.

Back in Calabar, elated with the performance of the UNICAL Malabites, there was celebration and funfair on the occasion of the team’s return. the management of the University of Calabar, further awarded the entire students that made up the team, full academic scholarships, alongside free accommodation for emerging league champions.

UNICAL Malabites, may have been crowned champions of the 2019 higher institutions football league, but the joy of victory was a shared one, 21 weeks of exciting football action, the memorable experiences that fans took home, at the end of every match day, the success stories of emerging stars at the end of the league season, alongside the massive opportunities available to brands. Of a truth, everyone wins with HiFL.

Olufemi Olatunji is the media officer of the Higher Institutions Football League, He writes from Lagos.