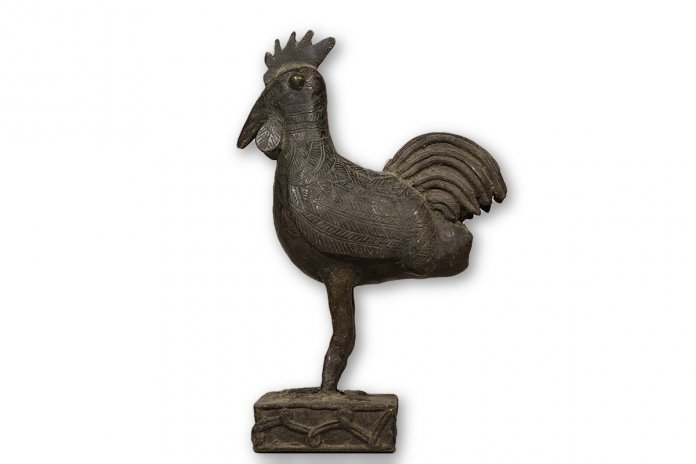 A bronze cockerel taken by British colonial forces and donated to Jesus College, a constituent of the University of Cambridge, England, is to be returned to Nigeria in an unprecedented step that adds momentum to the growing repatriations movement.

The Okukor, described by the college as a “royal ancestral heirloom,” will be one of the first Benin bronzes to be returned to Nigeria by a major British institution since the punitive expedition in 1897 when thousands of bronzes were stolen from Benin City by British forces.
A report in yesterday’s edition of THE GUARDIAN of London, said no specific date for the return had been released but the college stated that the bronze cockerel “belongs with the current Oba at the Court of Benin.”

The return was recommended by Jesus College’s Legacy of Slavery Working Party (LSWP), a group dedicated to looking at the institution’s connections to slavery, which confirmed the piece was donated in 1905 by the father of a student.

Sonita Alleyne, the master of Jesus College, said the decision was not taken to “erase history” but came after “diligent and careful” work that looked into the wider legacy of slavery at Jesus College.

“We are an honest community, and after thorough investigation into the provenance of the Benin bronze … our job is to seek the best way forward,” she said.

The cockerel had been removed from its public display following calls from students for it to be sent back in 2016, with the college pledging to begin discussions about its future, including a possible return to Nigeria. In the three years since, the college says it has been in discussion with the Benin Dialogue Group, a collective of artists and museum representatives who meet to discuss the future of the bronzes.

Victor Ehikhamenor, a Nigerian artist and member of the Benin Dialogue Group, said: “No matter how small the gesture may look, it is a huge step towards the realisation of restitution of the works from the Benin Kingdom that were looted by the British. This is very important example, which I hope other Europeans, especially British institutions, will follow without any excuses or delays.”

Dan Hicks, a professor of archaeology at the Pitt Rivers Museum in Oxford and a representative of the Benin Dialogue Group, said: “We have reached a tipping point in our national dialogues about the cultural restitution of objects looted under British colonialism.

“In the past, our attention on this matter was focused on national collections like the British Museum and the V&A – but in reality such loot is held in dozens of institutions across the regions: city museums, art galleries and the collections of universities.”

The move follows Manchester Museum becoming the first UK institution to return ceremonial items to Aboriginal groups nearly a century after they were stolen by British forces.

The repatriation of the artefacts, which include a traditional headdress made from emu feathers, could be the beginning of the return of tens of thousands of similar items from institutions across the UK.

The Jesus College announcement comes almost exactly 12 months after the release of a report commissioned by the French president, Emmanuel Macron, which recommended the return of colonial-era artefacts by France.

The report’s authors, the Senegalese economist Felwine Sarr and the French art historian Bénédicte Savoy, told THE GUARDIAN that the British Museum, which houses a huge collection of the Benin bronzes, was acting like “an ostrich with its head in the sand” by not acting faster on repatriations.

“There’s an expression in French, la politique de l’autruche, which means something is in front of you and you say you can’t see it, like an ostrich with its head in the sand,” Sarr told THE GUARDIAN. “They will have to respond and they can’t hide themselves any longer on the issue.”

The British Museum agreed with the report’s call for the establishment of “new and more equitable relationships between Europe and Africa”, and is represented in the Benin Dialogue Group.

Since the release of the report, Ivory Coast, Senegal and the Democratic Republic of the Congo have made formal requests for the return of artefacts. European countries, including France and Germany, have committed to handing back objects, with the Rijksmuseum in Amsterdam opening talks with Sri Lanka and Indonesia and describing the Netherlands’ failure to return stolen artefacts as a “disgrace”.

The news comes a week after Open Society Foundations (OSF) announced a $15 million initiative aimed at strengthening efforts to “restore cultural objects looted from the African continent”. It also follows the return of a colonial-era artefact by France, with Senegal receiving a sabre that belonged to a 19th-century Islamic scholar and ruler earlier in November.