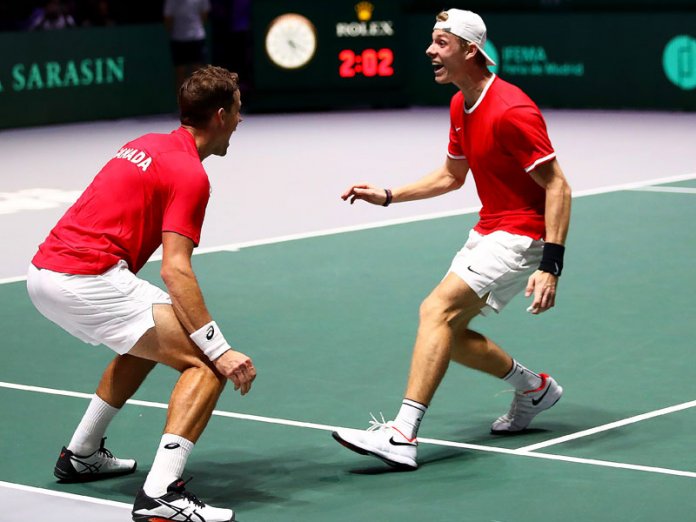 Canada beat Russia 6-3 3-6 7-6 (7-5) in an epic decisive doubles rubber to reach the Davis Cup final in Madrid. The pair of Vasek Pospisil and Denis Shapovalov beat Karen Khachanov and Andrey Rublev in a tie-break as Canada reached the final for the first time.

“I don’t think any of us expected that we could get this far,” Shapovalov said. “I think we just absolutely played ridiculous tennis.” Canada will face either Great Britain or Spain today.

Rublev beat Pospisil 6-4 6-4 in the opening singles rubber to give Russia the lead before Shapovalov levelled with a 6-4 4-6 6-4 win over Khachanov.

In the doubles, a final long backhand from Rublev sent Shapovalov and Pospisil leaping into the air and into each other’s arms.

“When I was sitting there on match point, my heart was beating so fast, I was actually starting to black out,” he said. “I was trying to control my breathing and just telling myself to breath slowly, stay calm, we’re close to this.

“It’s definitely an emotional rollercoaster, sitting on the chair. But at the day it’s an amazing feeling having your guys perform like this and put 110% on the court.”

Both Canada and Russia have only used two players during the competition, with Russia relying on Khachanov and Rublev after the withdrawal through fatigue of Daniil Medvedev.

Canada have benched Shapovalov’s Junior Davis Cup-winning team-mate Felix Auger-Aliassime following an ankle problem and were without Milos Raonic completely because of injury.

Rublev’s singles victory over world number 150 Pospisil, who had not lost a singles match in the tournament, put the pressure on world number 15 Shapovalov.

The Canadian number one rose to the challenge, fighting back from 1-4 down to win the first set. He then recovered from 0-40 to serve out the match against Khachanov.

Khachanov and Rublev had beaten Serbia’s Novak Djokovic and Viktor Troicki in a dramatic doubles rubber on Friday, saving three match points, but they could not repeat that feat yesterday, with Pospisil and Shapovalov coming from 4-2 down in the tie-break and taking their second match point for victory.

It was their third Davis Cup semi-final, after previous last-four defeats in 1913 and 2013.