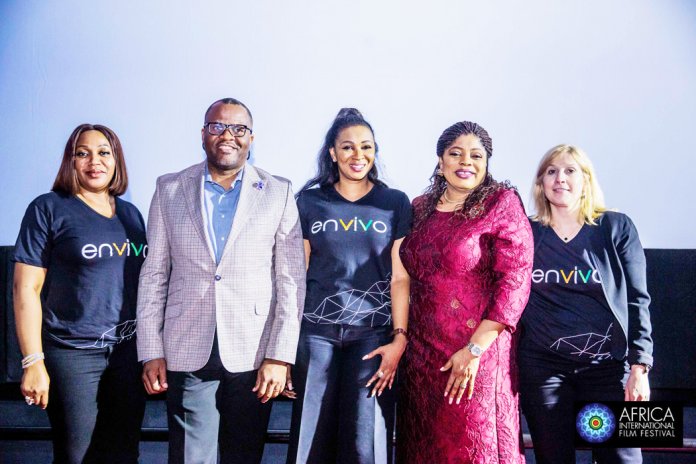 Ferdinand Ekechukwu writes that nvivo TV, a free video on demand streaming platform that offers diverse content from some of the world’s best content providers, is set to transform the entertainment front in Nigeria

Entertainment and content distribution in Nigerian is set to witness a major transformation following the official launch of nvivo TV as part of the activities of the just concluded 9th Africa International Film Festival (AFRIFF), held at the Landmark Event Centre, Lagos. It was an occasion that provided an opportunity for stakeholders in the movie and tech industry to witness firsthand the unveiling of the streaming platform from Envivo, a technology company that focuses on digital contents.

The new nvivo app is a free video on demand platform offering diverse short format content from some of the world’s best content providers, as well as locally created original production. According to the streaming service providers, it comprises a large bouquet of different kinds of television shows, mostly in short films from Nollywood that are original. Co-founder of Evivo Communications and organiser of AFRIFF, Chioma Ude, noted that AFRIFF would attract a large group of people in the industry thus a better platform to reach out to them.

nvivo TV is Pan-African and will showcase entertainment content from all over the continent. Ude spoke about the unique lineup of original TV shows and shoots which the streaming service will feature. “Being in the industry and being on the best of all end of it, I have always wondered what happened to the short films; brilliant, beautiful short films and its money spent and basically they end up on youtube or nowhere.

“Now, youtube is a great platform but I wanted something that will curate more of the contents so that you see what you are looking for, you know what you are looking for is right there and so  nvivo came to mind. That was the beginning. There are other reasons of course now but my main purpose of starting nvivo was to find a home for short movies.”

She noted that nvivo excites her because there is a new horizon in terms of distribution, in terms of monetising content in Nigeria and, of course, the rest of Africa.

She revealed that nvivo television had teamed up with the best movie directors, producers and actors to provide quality, original and free content out of Nigeria for television and movie lovers who want a one stop-shop where they can watch their favourite shows, skits and movies.

“nvivo television content is also optimised to save data and it can be viewed on six devices, including all smart televisions, smart phones, tablets, Android and IOS devices, and your laptops,” she said. The nvivo TV app is available on Google Play Store and Apple Store. A couple of the films already on the new platform were seamlessly shown to the audience.

Since it is going to be purely on digital format what arrangement/partnership is in place with the telecom companies because data is a big challenge in Nigeria and how the providers would help consumers to enjoy what will be dishing out from nvivo.

Envivo has a very strategic partnership with MTN while observing what NCC was doing with mobile rate at the moment sort of wanting to promote video content, especially causing them to crash data prices to the point that, as today, data is not the biggest issue but the payment.

Ude said: “Another thing in consideration of data is that we partnered with Cisco systems. We have built out a content delivery network; we just didn’t build out an app. So, we have our servers all at Mainone here in Nigeria. Now in the Cisco system there is a compression technique that is also embedded in it. Your data goes a long way when you are watching anything on our platform without distorting the quality of the programme.

“So there are different ideas behind it. One comes from running the festival and having all these beautiful shorts and I’m thinking to myself where do they end up that’s one. How is it monetise, that’s two. And also in having a partner that is very technology savvy. He came and he said to me what are you doing with all the content that comes into the festival? How do we even get the contents to all the homes? And then again you have X amount of cinemas and for you to reach 200 million people, you need X amount of cinemas. So I’m thinking how do we get these movies to home factor and in a cheaper way?

“So, nvivo has been established to create home for short movies but would also feature animations, documentaries, games, cartoons, series and more.”

Ude added that nvivo was the hub for Hollywood, Nollywood, Bollywood and Telenovelas at their fingertips and in snack bite sizes. She said it had been licenced with some local television series, three Bollywood content providers for content generation. According to her, the nvivo tv was initially launched in four African countries: Kenya, Tanzania, Ethiopia and Namibia. Nvivo TV has two components majorly; the AVOD section which is primarily free content on various genres and the TVOD, which is the transactional video section on the app as well.  The TVOD section will be launched in a couple of weeks.

A co-founder of nvivo, Mr. Olu Obadina, further added to the narrative, saying “it brings a lot of efficiency to the things we do, particularly in a society like ours where we don’t have sufficient infrastructure. So, we are saying, like mobile data liberating us from the few amounts of lines that we can do, it’s time for mobile data to liberate us from the few amounts of television screens that we can build. And I will put that in perspective. In the United States there’s a cinema screen to every eight thousand people. In China there’s a cinema screen to every 36 thousand people. In the UK, every 18,000 people can find a cinema screen.

“But in Nigeria, you find a film cinema screen to every 1.6 million people. And that’s actually causing this creative energy called Nollywood not to really be sustainable in terms of monetising their contents and contributing to the country’s GDP.

So, we started looking at that and decided there are about a 100 million people in Nigeria that view content on their mobile devices.

And mobile devices have become a viable screen therefore why can’t we develop that technology that would make it possible for this creative minds to be able to further monetise their content by distributing it on that ubiquitous device. That’s what we have powered in nvivo.”

Obadina observed that Nollywood had been rendered non-sustainable in terms of revenue generation and contribution to the country’s Gross Domestic Product (GDP) due to lack of basic infrastructure. He said that establishment of the online television channel would minimise the effect of the absence of basic infrastructure as people get entertained at their comfort zones. “We have problems with our roads, irregular power supply and a whole lot of other things, which are discouraging factors to visit cinemas or watch movies at the appropriate time. This platform will enable you watch movies wherever you are,” he said.

Obadina said with the way nvivo was designed, other online television streaming platforms could develop their content through nvivo as it would also showcase original African programmes.

Obadina said that Envivo had partnered with Unity Technology, an animation company abroad, to train 3,200 Nigerians on animation creation and that these would in turn create content for the nvivo platform. He said there were a couple of other collaborations to guarantee seamless streaming and content distribution which were with MTN, Sisco system, digital marketing institutes and more. Mr. Victor Anjorin, Chief Executive Officer, nvivo, who explained how the platform works to the audience, said the subscription is free for all viewers.