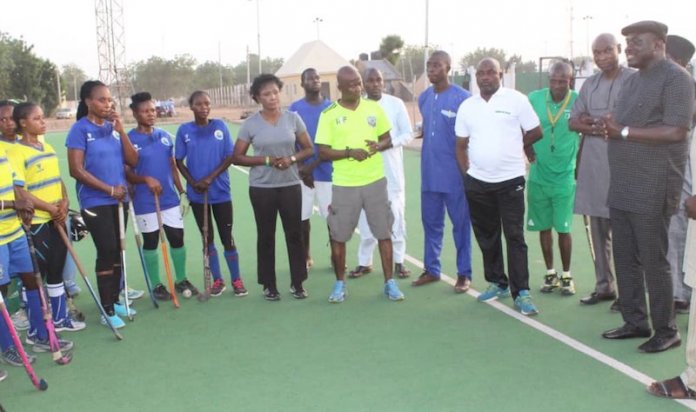 The President, Sports Writers Association of Nigeria (SWAN), Honour Sirawoo, has charged athletes and team players in Yobe State to aspire beyond the state in their chosen sports.

He gave the charge in Damaturu, Yobe State capital, shortly after inspecting facilities at the August 27 Stadium, where he addressed athletes preparing for international championship among others as part of activities marking his two-day official visit to the state.

Sirawoo, who appreciated the level of engagements of young talents in the sports development architecture of the state said with determination, their dreams of becoming great players could be achieved.

He told the athletes that sports have gone beyond recreation to become a money-spinning venture, which if properly harnessed will reduce youth restiveness in the society.

“Sports is now a serious business, if you do it well, you will attract wealth, you will attract respect to your people, you will serve as a model to others and be useful to society,” the nation’s number one sports journalist said.

The SWAN President, who charged members of the association in the state to be proactive, equally called on the government to upgrade facilities at the August 27 Stadium to expand the frontiers of sports in Yobe State.

He urged SWAN members to close ranks with a view to growing the association to greater heights, emphasizing the need for training and adherence to the Statute.

During the visit, Sirawoo met with the state female hockey team preparing to represent Nigeria in an international hockey championship in Egypt, Yobe Desert feeder team, para soccer team basketball players, inspected the VIP lounge and gymnasium in the stadium.

The visit continues with a courtesy call on the Emir of Bade, Alhaji Abubakar Umar Suleiman II, who is a strong supporter of Sports and SWAN in Yobe State.