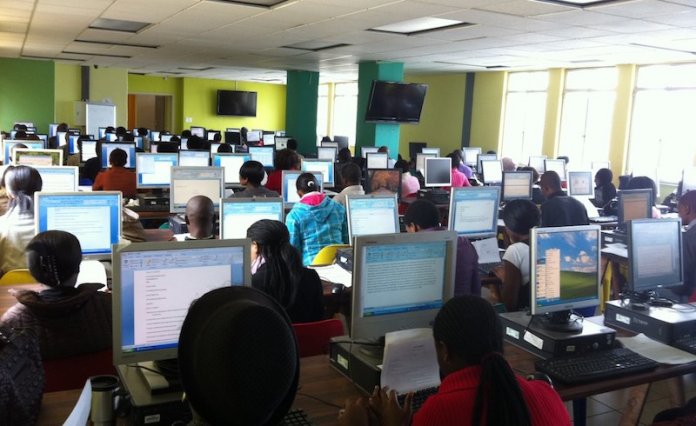 Computer-Based Test (CBT) Centre owners in Lagos State have disassociated themselves from a purported national body, the Computer-Based Test Centres Proprietors’ Association of Nigeria (CPAN).
This followed a report by a national daily, which quoted CPAN as stating that the failure of biometric and browsers provided by the Joint Admissions and Matriculation Board (JAMB) for the 2019 Unified Tertiary Matriculation Examination (UTME) was responsible for the inability of some candidates to sit for the examination.

Describing CPAN’s statement as offensive, condemnable and aimed at discrediting JAMB, a CBT owner, Alexander Ogedengbe, who spoke on behalf of CBT centre operators in Lagos, alleged that the professed national body had short-changed the system at some point.

Ogedengbe, who alleged further that through investigations, it has been established that the person who addressed the media on behalf of CBT centre owners in Nigeria, during which he made the above declaration, does not own a CBT centre.
“To say that they represent CBT centres in Nigeria whereby they do not have CBT centres is an affront.”

Ogedengbe added: “It’s unfortunate that this same person together with a group of persons whose centres were delisted by JAMB as a result of technical deficiency of their centres or examination malpractices will now stand as arbiters to judge JAMB’s competency visa viz UTME examination conduct.
“We hereby state categorically that we the CBT operators in Lagos State are neither part of the group nor aware of the conference where statement was made and hence disassociate ourselves entirely from the publication.

He explained: “Moreover, we the CBT operators have no jurisdiction over the biometric of the candidates. The officers charged with these responsibilities to our own knowledge discharge their duties reasonably.”

Revealing that another issues raised has to do with the examination browsers, Ogedengbe said: “According to JAMB, the security of the examination is paramount to the board hence they have the right to decide and deploy the type of browser needed to achieve their objective.”

“The board sent information to all the centres to delete the old browsers and download a new browser meant for the 2019 examination. The challenges arose at the centres that didn’t comply with this instruction or where the specifications of the system were not met.