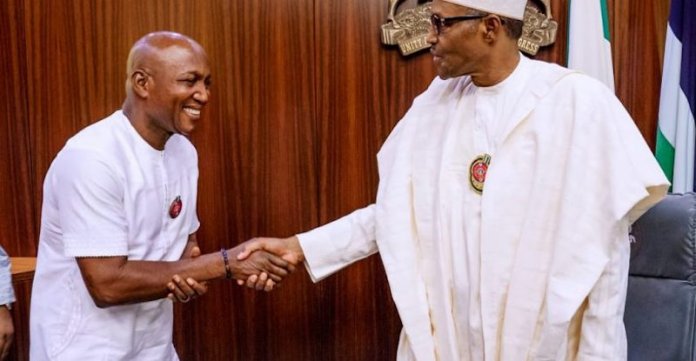 Defected senators have been punished by Nigerians, says Oshiomhole

Presidency advises PDP to be gracious in defeat

This is coming as Oshiomhole, yesterday commended Nigerians for punishing all 16 senators that defected from the APC in July last year.

The meeting with Buhari was held behind closed-door.

Lyon described his victory as one of his greatest moments in his life.

He told State House correspondents that the people of Bayelsa State had decided by voting for the APC. He also said security and development will be the core priority of his administration.

“It is indeed a welcome development because at our campaigns, we promised that when elected and sworn in, security and development will be our key agenda and with the support of Bayelsans they have made this possible.

I am sincerely grateful and to the president, for his fatherly advice. We promise that we Bayelsans will not disappoint APC. We will consult with our leaders, traditional rulers and I believe there will be a serious positive change in Bayelsa State. I thank the President for having me here today as governor-elect of Bayelsa State,” Lyon said.

Oshiomhole, who led the team, likened the Bayelsa governor- elect to a “brand new baby” that will be sworn in February 14, 2020, which incidentally is on Valentine Day.

He also thanked the former President Goodluck Jonathan for the warm reception he accorded Lyon.

He said: “But of course, we also know that there was an election in Kogi but that is a matter for another day when we present the governor are-elected.

“But we do realise that all the 16 senators who decamped along with Senator Bukola Saraki from APC to PDP, hard as they have tried to come back the Nigerian people in their respective constituencies, have insisted on punishing them for being disloyal and refusing to monetizing their mandates.

“I think the only that is still struggling now is Dino Melaye but as you can see from the result so car, Senator Smart Adeyemi is leading by over 20,000 votes even though INEC insists we must have a re-run for the remaining areas we are confident that there is no way he can make up for 20,000 vote deficit.

“I think the lesson for us to be learnt as a party is rather clear, that when politicians go to the polls to collect mandate on a particular political platform and then they dumped the party for another party, the electorate will always be waiting for them”.

Meanwhile, the presidency has advised the PDP to be gracious by accepting in good faith the outcome of Saturday’s election where APC candidates emerged winners in Bayelsa and Kogi States governorship election.

Presidential spokesman, Garba Shehu, in a statement, yesterday derided the PDP for always challenging any poll that does not return its candidates.

Shehu said that any election is good when the PDP wins, while the opposite is the case if any party other than the PDP wins.

He said democracy is not only about who wins or who loses, but also about the process, saying by disparaging every unfavourable result, PDP only disgraces itself by casting aspersion on the entire system.

“The February 2019 election saw the loss of five All Progressives Congress governors. The government accepted the results. In doing so, we realised that we did not win the argument in those contests, and so we didn’t win enough votes. We retired to assess what went wrong: were we responsive enough to the electorate’s needs and priorities? How can we improve on speaking to the nation’s hopes? We got ready and prepared ourselves well for the next contest. The result is a healthier, more rigorous election,” Shehu said.

He also wondered why the opposition is fond of casting aspersion on the electoral commission, security agencies, government in the centre, particularly on the person of the President, saying such practice after each election loss is antithetical to healthy democratic norms.