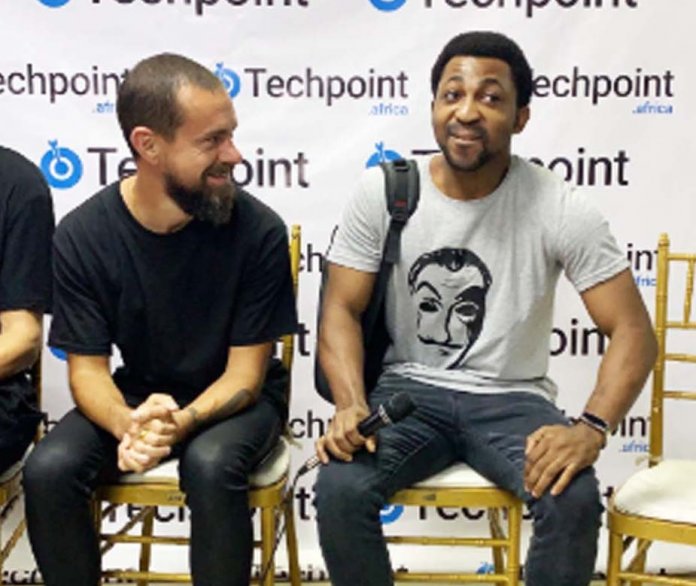 “I wasn’t expecting this. I attended the event with the hopes of figuring out solutions to important questions other attendees might have. I also wanted to have a feel of what it’s like to be around the CEO of Twitter. Things went way better than expected.” That was the Nigerian tech developer, Dara Oladosu, shortly after accepting a job offer from the micro-blogging company.

It underscores the most profound topic arising from the visit of Twitter CEO and co-founder, Jack Dorsey, to Nigeria, away from the mundane deed like the CEO’s attempt at speaking a Nigerian language and also following back a recent reality TV star who perhaps only got to know about the American computer programmer and internet entrepreneur following trends of his visit to Nigeria!

The Twitter boss who was in Nigeria with his team as part of his listening and learning tour across four African countries had met and interacted with media personalities as well as Tech developers in Nigeria regarding Twitter’s plans for Nigeria and Africa as a whole. Oladosu was at one of the meetings with Dorsey and his executives and other local entrepreneurs when he was offered a job at Twitter to help build a native “quoted tweet” feature for the platform. The Lagos based software developer had contributed impressively to humanity with his technological innovation called Quoted Replies which he built in December 2018 when he discovered that tweet’s link could be used to search Twitter for quoted replies.

At the event, the Twitter executives were introduced to Quoted Replies, the viral Twitter-based bot that helps you find quoted replies of tweets without having to go through the hassle of copying, pasting, and searching. All listening to Oladosu sharing the Quoted Replies story of how he built the Quoted Replies bot, revealed that it garnered over 40 million impressions in October alone. Impressed by his work, a member of the Twitter management who is the product lead, Kayvon Beykpour, instantly offered him an opportunity to join them so they can develop this feature which, is not originally on the app.

The software developer had built a Chrome add-on to help twitter users maximise the function of the bot more. Some of the users of the bot, also mobile app developers, had noted that the bot has been quite helpful. However, with the strict stance twitter has against bots, some of the replies links the bot generated were always banned and users could not access them. Oladosu was able to fix that around July 2019, a report says.

Granted that the Quoted Replies bot has become a very useful Twitter tool used daily by thousands of people all over the world, it was only a matter of time before Twitter built its own native feature. And no one knows this more than Dara Oladosu who is a software developer at Andela. Andela provides companies with access to the top 1% of global tech talent, identifies high-potential developers on the African continent, shape them into world-class technical leaders, and pair them with companies as full-time, distributed team members.

An avid learner and always ready to add value to others, Oladosu is pretty excited about the idea of integrating Quoted Replies as a native feature on Twitter because according to him, while the bot is quite helpful to users, it has some limitations right now which would be figured out. While he’s not exactly clear on the exact role he’d be playing at Twitter, Oladosu says he’s looking forward to “contributing towards making sure that Twitter users, and developers who create software using Twitter’s APIs, get easy access to all the useful information that they might need.”

The university of Ilorin graduate’s bot is a big advancement on the ‘retweet with comment’ feature that the social media platform introduced some years ago which allows user to quote a tweet with their comment. What differentiates that feature from commenting directly under a tweet is that the user’s followers can easily see the person’s comment and what it is directed at, unlike if the comment were under the said tweet. Dara Oladosu has made interaction more fun for users with the creation of the bot.

@QuotedReplies currently has users from all over the world, including Nigeria, India, the Philippines, Indonesia, and the United States. Having only launched in November 2018, the bot’s Twitter page currently boasts nearly 45,000 followers while working quite well too. Although not enough Nigerians are Twitter as revealed by Dorsey, in recent years there has been barely any social media platform contesting with Twitter in hosting Nigerian conversations whether protests, rants or canvassing social movements.

But that isn’t enough for Dorsey who also the CEO of Square, a mobile payments company when asked how many Nigerians were active on Twitter, Dorsey simply responded, “not enough”. But he did not reveal the actual figures. The listening and learning visit is slated to host Jack and his team in three other African countries, Ghana, Ethiopia and South Africa. On the part of the platform, it has given nods to Nigeria over the past one year, one of which includes the appointment of Nigeria’s former minister of finance, Dr. Ngozi Okonjo-Iweala to its board. With millions of people visiting the social media platform monthly, Nigeria is arguably the platform’s biggest market in Africa and it’s no surprise it is Dorsey’s first point of call.