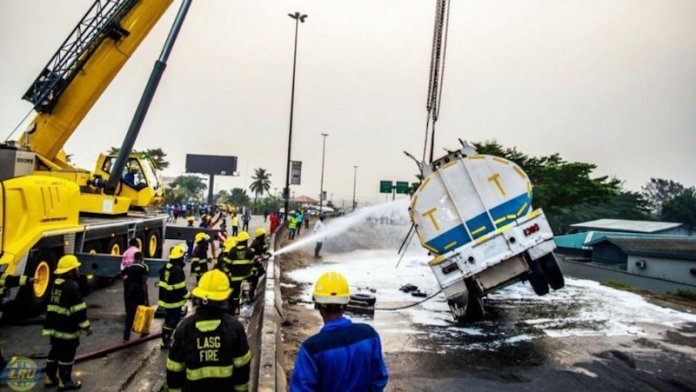 Vehicular traffic came to standstill yesterday at the Murtala Muhammed International Airport (MMIA), Lagos when a 42 feet truck, laden with 33, 000 litres of petrol fell and spilled content on the link road connecting the domestic terminals to the international wing of the airport.

The road was blocked for hours, creating fear that the highly flammable product could ignite fire and gut some part of the airport, located few meters to the headquarters of the Nigerian Civil Aviation Authority (NCAA), Forte Oil Filling Station, the Head officer of Arik Air and about 20 meters to the General Aviation Terminal (GAT), known as MMIA Terminal 1.

However, no life was lost and no injury was reported.

Eyewitness account told THISDAY that the accident occurred when the driver lost control of the vehicle while descending the slope on the link bridge between Mobolaji Bank Anthony Way, Ikeja and the Lagos Airport.

To avert plunging the vehicle on the filling station, driver of the truck swerved it to the left side of the road and hit the median before it fell on its side, after hitting a bus in motion but there was no severe damage.

The spilled petrol after fall streamed down through the gutters towards the headquarters of the Federal Airports Authority of Nigeria (FAAN), but it did not ignite fire.

The tanker owned by Forte Oil was bringing supplies into the station when the accident occurred late morning.

A statement from the Lagos State Emergency Management Agency (LASEMA) said the Lagos State Fire Service Officers came to the scene were involved in the blanketing of the entire area.

Also on ground with LASEMA were officers of the Nigeria Police Force and LASTMA Officials providing security, crowd and traffic control.

LASEMA explained in the statement which was signed by the agency spokesperson, Nosa Okunbor said the impact of the fallen tanker resulted in the spillage of its contents.