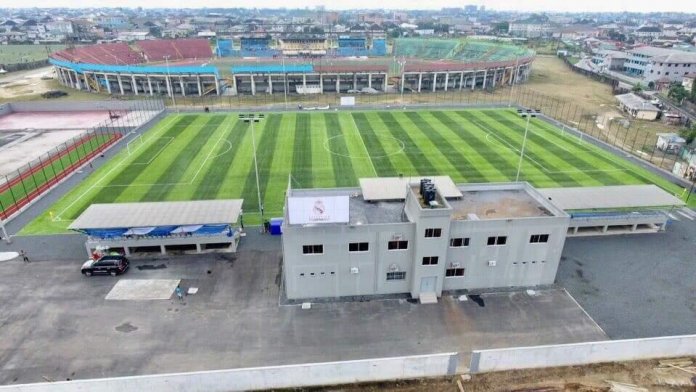 Rivers State Government and Real Madrid Football Club last Monday officially signed a ratification agreement for the development of Real Madrid Academy, Port Harcourt into an international football academy. The agreement signing ceremony which took place at the Santiago Bernabeu Stadium, home of Real Madrid Football Club in Spain, is another way by the state government to show the seriousness it attaches to the growth and speedy take-off of the Academy in Port Harcourt.

The signature of the ratification Protocol was executed by the Rivers State Governor, Nyesom Wike and the Executive Vice President of Real Madrid Football Club Foundation, Enrique Sanchez.

In his address, an elated Wike said the state government was preparing the Real Madrid Academy as a veritable pathway for the empowerment of Rivers children.

“Taking the interest of our youths, the Real Madrid Academy is designed for culture and holistic programmes with a comprehensive package for the acquisition of high level knowledge in a comfortable and inspiring environment,” he said.

Executive Vice President of Real Madrid Football Club Foundation, Enrique Sanchez, commended the state government for its commitment to using football as a tool to empower youths. He assured Wike that the Real Madrid Foundation would continue to partner with it for the training and exposure of Rivers children.

Sanchez said the partnership with the Rivers State Government would be expanded to include local schools in Rivers State.

The Director of Institutional Relations in Real Madrid Football Club, Mr. Emilio Butragueno said that Real Madrid appreciates any authority that promotes the wellbeing of children irrespective of their background. He thanked Governor Wike for the initiative of using football as a platform to reach out to different categories of Rivers children.

Nigerian Ambassador to Spain, Ambassador Susan Aderonke praised Governor Wike for his investments in the development of football.

“This is a legacy that Governor Wike is leaving for Nigerian children. We are happy with his investments in developing the future of our children,” she said.

Recall that at an elaborate ceremony as part of the activities marking his 100 days on second term in office on September 21, 2019, Wike had unveiled the splendid Real Madrid Football Academy in Port Harcourt aimed at promoting professional football in the state and the country in general. The complex boasts of modern equipment and all the necessary facilities needed to encourage and aid young talents.

The Academy, which also has hostels, would also boast of a secondary school to complement the football training. According to the state government, the Academy would be tuition-free for Rivers indigenes.

At the unveiling of the facility by Governor Seyi Makinde of Oyo State, Wike again reiterated that the project was constructed to promote professional football in the state and the country in general. He added that the people of Rivers deserved the best, and this was why his administration was committed to initiating and executing quality projects for the people. He said that 70 per cent of the students of the academy would be from Rivers, while other Nigerians would form 30 per cent of the school’s intake.

To further consolidate the gains of the partnership Wike before leaving Spain, met with the President of Real Madrid Football Club, Florentino Pérez where he reiterated his commitment to developing the Academy to groom international football stars and empower less privileged children. The governor informed Pérez that the Real Madrid Academy in Port Harcourt would effectively combine football and education as it grooms new stars.

President of Real Madrid Football Club, Florentino Pérez, commended Governor Wike for partnering with Real Madrid to set up the Academy in Port Harcourt. He assured that the club would support the growth of the Real Madrid Academy in line with the partnership.