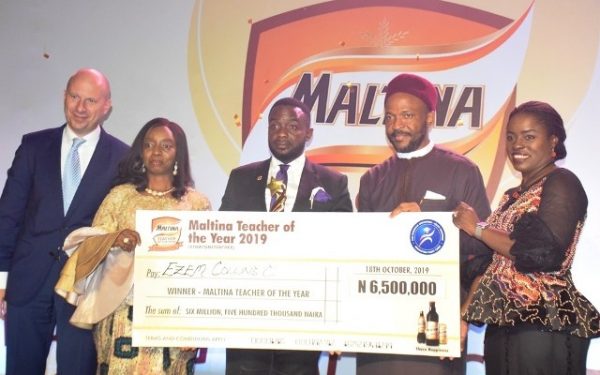 Raheem Akingbolu
A teacher at the Royal Family Academy, Abuja, Ezem Collins, has emerged the 2019 Maltina Teacher of the Year.
Collins, a Civic Education and Christian Religious Studies teacher was declared winner of the award at the grand finale held recently in Lagos.

For emerging the winner of the 5th edition of the award, Collins was awarded a total cash prize of N6.5 million (N1.5million immediately and N1million annually for the next five years) by the Nigerian Breweries – Felix OhiwereiTrust Fund.

The organisers also stated that he would also get an all-expense paid capacity development training abroad while a furnished block of six classrooms, a library and sanitary facilities worth about N20 million will be built for his school in his honour by the Fund.

Megbowon Soji, a teacher from Jakande Estate Comprehensive Senior College, Lagos State emerged the first runner-up winning a total of N1.5 Million while Atondo Fidelis, a teacher from Government Secondary School, Ingawa, Katsina emerged as second runner-up with a prize of N1, 250.000.00. Other 20 teachers who emerged as state champions were also rewarded with a sum of N500, 000.00 each.

Speaking at the event, the Vice President, Professor Yemi Osinbajo who was represented by the Minister of State, Education, Hon. Chukwuemeka Nwajiuba, applauded Nigerian Breweries Plc for being at the forefront of improving the education sector by continually investing not only in educational infrastructure but also motivating and inspiring teachers.

Osinbajo noted that the investment in a unique initiative such as the Maltina Teacher of the Year will obviously contribute to the improvement of education in Nigeria by recognizing and rewarding outstanding teachers in Nigeria.
“I am honoured to join this one-of-a-kind initiative to celebrate the Nigerian teacher. Whatever we have become is a direct outcome of what you, our teachers, have passed on to us,” he said.