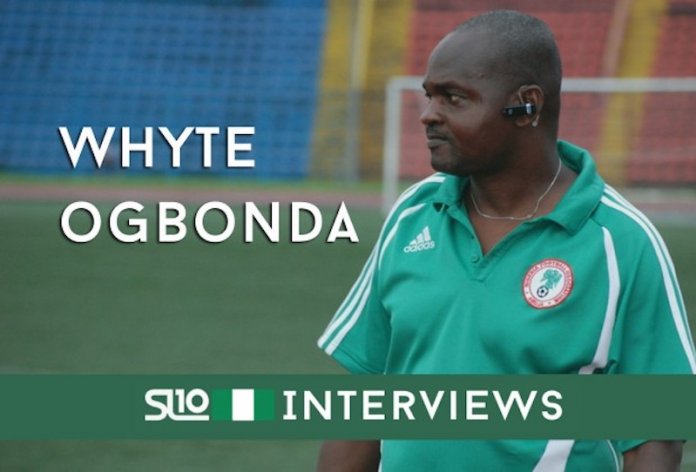 The Chief Coach of Confluence Queens of Lokoja, Whyte Ogbonda, whose team will be making an historic appearance in the Nigeria Women’s Premier League Super 4, has said the main objective of his team is to emerge the champion of the 2018/2019 NWPL season, despite being their first time of participating in the Super 4.

The 2018/2019 edition of the Nigeria Women Premier League (NWPL) Super 4 competition will officially flag off in Lagos at the Soccer Temple, Agege Stadium, on Tuesday, October 29, 2019 with the official arrival of all the participating teams: Rivers Angels, Bayelsa Queens, Adamawa Queens and Confluence Queens.

The Super 4 will be a battle among the top teams in the regular season of the Nigeria Women Premier League to determine the winner for the season.
Ogbonda, said his players are determined to cause further upsets in the NWFL top competition by lifting the coveted trophy in their first attempt.

“We are not afraid of any team, rather we are the most feared among the quartet and pressure is not on us but on the reigning champions, Bayelsa Queens and former champions, Rivers Angels, who would work round the clock to sustain their high reputations. It’s an advantage for us as we shall freely exhibit our talents while the giants exercise extra caution in their games.
“We are more than ever calm and relaxed coming to Lagos to enjoy ourselves with our known traditional style of football aimed at winning the trophy in our first attempt at the NWPL Super 4 competition.

“We are aware that the NWPL Super 4 is the showcase of the best women’s clubs in Nigeria and will never be a cheap competition.
“However, our mindset and resolve are fixed on the mantra – the harder the opponents come, the harder they will fall.
“Our mission in Lagos is to further cause upsets among the known giants and lift the NWPL Super 4 trophy for the good people of Kogi state.

“Of course, the financier of the club, the Kogi State government has handed us the task to deliver the cup and leave the rest for them.”
Ogbonda added: “We have prepared the players adequately for the task ahead, they are hungry and ofcourse understand the task at hand. I am optimistic my players will deliver the goods.

“I have their confidence, they, too have my confidence to execute and interpret to the last details all instructions that would be handed over to them to execute each of the games,” said the former Ibom Angels and Rivers Angels tactician to NWFL Media.
Confluence Queens secured their first ever NWPL Super 4 ticket at the end of 2018/19 regular season beating the likes of Abia Angels, Ibom Angels and Invincible Angels for the top spot of Group D.

The draw for the NWPL Super 4 will hold on Thursday at the Indoor Sports Hall of the Agege Stadium, Lagos, while football actions will commence on Friday among the four gladiators and third place and final matches hold on Sunday at the ‘Soccer Temple’ Agege Stadium in Lagos, leaving out Saturday as the rest day

The Chairperson of the Nigeria Women Football League, Aisha Falode, said in Lagos on Monday that, the 2018/2019 Super 4 will be very exciting and full of action as the competition has equitable share of the clubs from two football playing zones of the country.
“It’s the first time, we shall be seeing two teams each from the Northern part of the country and two from the Niger Delta, coming together to battle for the Premier League title in the Super 4 Challenge.

Falode noted: “This time around we have added some innovations that would make the Super 4 interesting to all Nigerian women’s soccer fans.
“I want to assure Nigerians that they would improved standard of play in all the matches that would be played at the Agege Stadium.

“If you are in Lagos on November 1 and 3, the place to be is the Soccer Temple, Agege Stadium to watch enterprising display of football skills by women footballers at the highest level.”