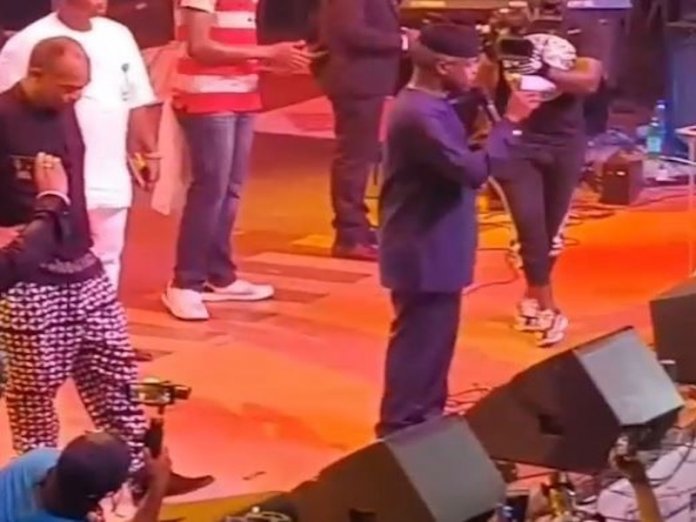 Osinbajo spoke at a town hall meeting in Benin City, the Edo State capital, when a citizen demanded that the national theatre be named after the legendary musician.

The vice president, who though said such a decision, was not within his powers, however, agreed that Fela deserved a national honour from government even after his death, both as a Nigerian and father of modern music in the country.

He said: “Well, I don’t see any reason, why not? The only problem, of course, is that it is not in my place to decide what national monument of such should be named after any individual. But I must say that I agree with you that Fela is as deserving as any to have such a preferred monument named after him”.

On the need to have ‘Nigerian music dot com’ as requested by one member of the audience, he said, “truth of the matter is that if you look at all the examples given, they are all private-driven”, adding that to sustain any of such, they must have a pure public motive.

“Government is the poorest businessman you will ever find and that is why I certainly do not support the idea of government investing in those things,” he said, stressing also that what government could do was to see if it could get funding for private sector individuals, who want to invest.

“There are two very good initiatives for funding creativity in Nigeria. One is the Bank of Industry. The Bank of industry has put together a fund for culture organisation and we think that it will be one that will be able to satisfy some of these ideas.

“The other is the Master Card Foundation, who have also indicated that they will be very happy to invest in creativity and entertainment generally. So, I think that’s the kind of thing that government can do is to see how we can invest by way of funding and then encourage investment in some of these and I think we can certainly do so through some of the funding initiative that I have mentioned”.